Now through the first five Sunday’s of NFL action this season, there is not a single undefeated team remaining in the NFL. That’s a pretty amazing thing, especially for those of you who applaud the league’s attempt to create parity.

Week 5 of the NFL slate will wrap up Monday night when the Seattle Seahawks travel to the capital to take on the Washington Redskins, but the drama and intrigue that we viewed on Sunday will be hard to surpass.

From an overtime game in Dallas to a 58-yard game-winning field goal in Detroit, a whole heck of a lot happened around the league on Sunday.

As we have done each week, it’s time to give you 10 takeaways from Sunday’s NFL action.

1. Parity is the Theme of the NFL Season Thus Far 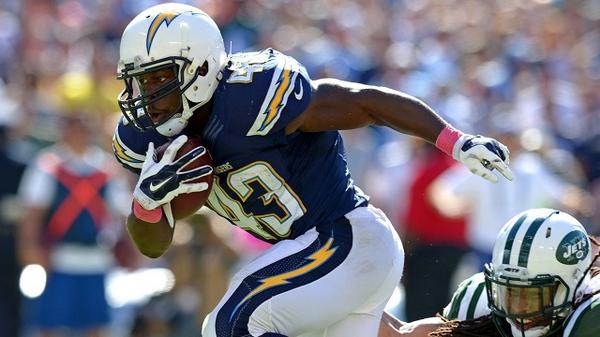 Courtesy of Rant Sports: At 4-1, the Chargers join two others with the best record in the NFL.

By virtue of Cincinnati’s blowout loss to New England on Sunday night, there is not one single undefeated team in the NFL through five weeks. If that’s not a sign of parity, I am not sure what is. And then consider this: two NFC East teams (Dallas and Philadelphia) share the best record in the NFL with the San Diego Chargers.

Though, it must be noted that the 12 playoff teams from a season ago have a combined .640 winning percentage, while the eight last-place teams from 2013 have combined for a 13-22 record. The parity comes in the form of the 18 teams that are either 2-3 or 3-2 on the season. Five weeks is surely a large enough sample size (29.4 percent of the schedule) to draw some conclusion here. 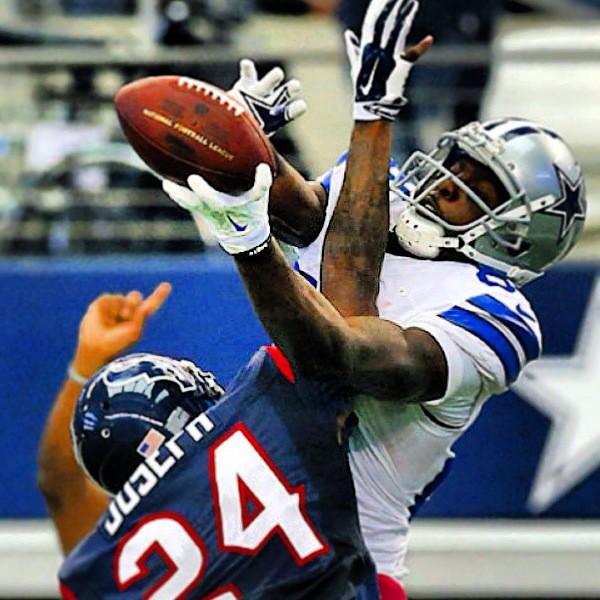 The Cowboys showed toughness in overcoming mistakes to beat Houston on Sunday.

Dallas didn’t necessarily play its best game Sunday against the Houston Texans. Its defense gave up a 10-point lead in the fourth quarter, which forced the game into overtime. And it took a huge play from Dez Bryant in that extra period to put away a pesky Texans squad.

While not terribly impressive, this is a game that Dallas would have found a way to lose in each of the last three seasons. And to be completely honest, it would have been near disaster with a road game against the Seattle Seahawks looming next week.

Now at 4-1 on the season, Dallas has to be considered the odds-on favorites to win the NFC East. The simple fact that it could come away on top against a pretty good Texans team without playing its best football should tell us most of what we need to know about this team through five weeks.

3. Matthew Stafford Continues to be Overrated

It’s rather obvious that Stafford just isn’t the same quarterback when Calvin Johnson is either slowed down or sidelined with an injury. The former No. 1 overall pick led the Lions to one touchdown-scoring drive against the Buffalo Bills in a 17-14 loss on Sunday. He completed just 18-of-31 passes for a pedestrian 221 yards with a touchdown and an interception in the defeat. For his part, Johnson tallied just one reception on a single target in limited playing time before re-injuring his ankle.

If Johnson is unable to get to 100 percent at any point soon, the Lions are in danger of struggling big time on the offensive side of the ball in coming weeks. While it will get easier against the likes of Minnesota, New Orleans and Atlanta over the next three games, Stafford simply can’t be relied on to carry the offense. And for that alone, he’s one of the most overrated quarterbacks in the NFL.

4. Joe Flacco Can’t Carry an Offense on his Shoulders 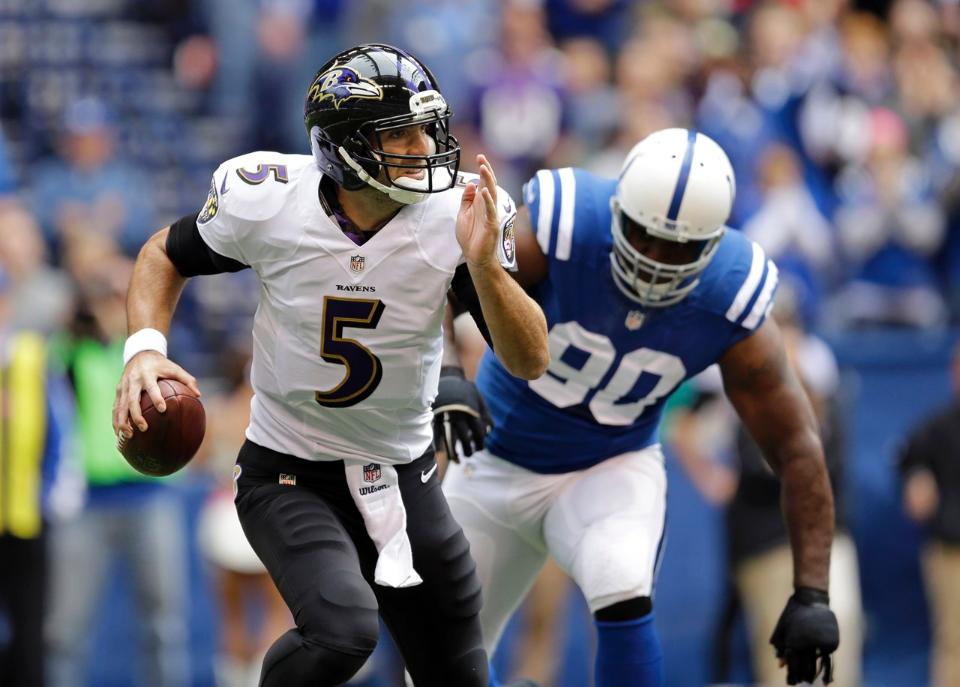 When Flacco has the running game going well behind him, he can manage a team down the field and to wins on a consistent basis. When said running game is stumbling, Flacco himself struggles to carry the Ravens offense. After three games (all wins) that saw the Ravens tally nearly 450 yards on the ground, their running game just didn’t do a whole lot against the Indianapolis Colts. When all was said and done, Baltimore put up just 90 yards on 15 attempts. It’s that lack of commitment to the run game that failed Baltimore in a 20-14 loss to Indianapolis.

For his part, Flacco put the ball up 38 times, which is his highest-single game total since attempting 62 passes in a Week 1 loss to the Cincinnati Bengals. This brings Flacco’s career record to 14-16 when he attempts more than 35 passes. For comparison’s sake, he boasts a 51-19 record when he attempts 35 passes or less. That’s pretty much all you need to know about Flacco’s ability to carry an offense.

5. San Francisco 49ers Have Their ‘Mojo’ Back 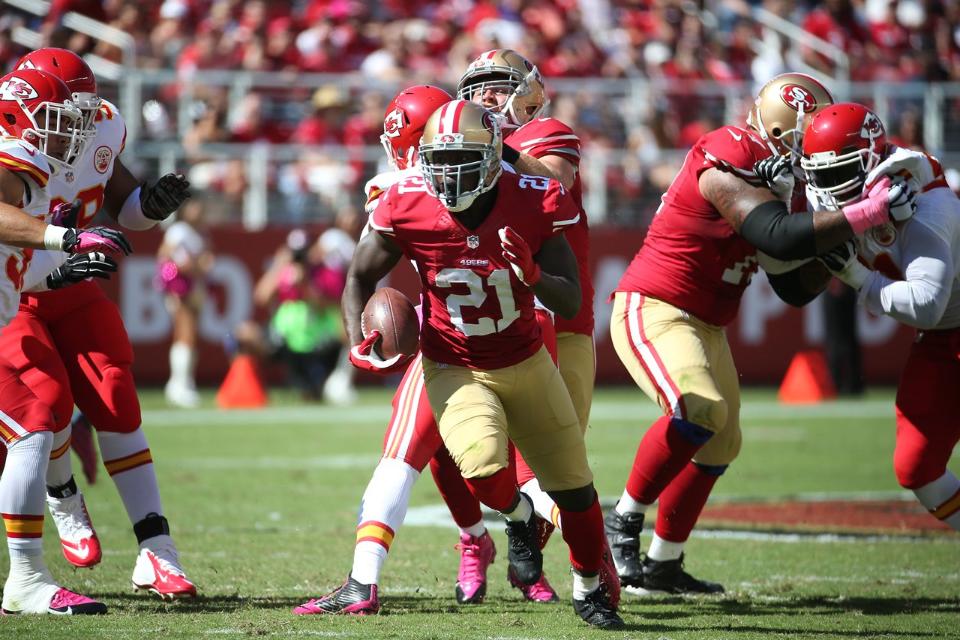 Courtesy of 49ers.com: Frank Gore and the 49ers are back in business.

All this talk about Jim Harbaugh’s job security, and whether certain 49ers players want him fired, has clouded the fact that San Francisco has now won two consecutive games against pretty good teams. Relying on a tremendous defensive performance and five Phil Dawson field goals, San Francisco ousted a Kansas City Chiefs team that was coming off a blowout of the New England Patriots.

Offensively, San Francisco put up 22 first downs and 357 total yards. In total, this unit scored on six of its eight possessions. Showing signs that he may play until he’s 50, Frank Gore put up 107 yards on 18 rush attempts. Meanwhile, Colin Kaepernick added 219 total yards and a score in the 22-17 victory.

On the defensive side of the ball, San Francisco changed up its game plan after former 49ers quarterback Alex Smith led the Chiefs down the field on an easy touchdown-scoring drive to open up the game. Kansas City tallied 95 total yards in the second half, even after opening up the third quarter with a 58-yard touchdown-scoring drive. Youngsters Aaron Lynch and Eric Reid played darn good football, while Patrick Willis and Justin Smith dominated up front. It’s this type of win that has come to define the 49ers since Harbaugh took over back in 2011. And it’s this type of strategy that will take the team as far as it’s going to go this season.

6. The New York Jets are a Hot Mess 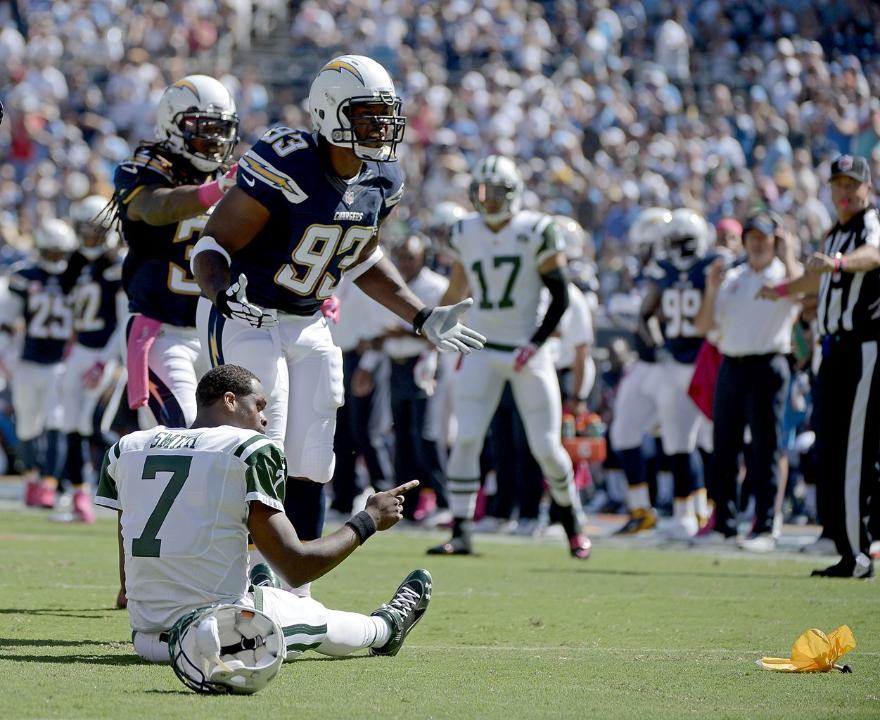 It’s been well documented just how bad Geno Smith played in the first half of Sunday’s 31-0 loss to the San Diego Chargers. How in the world does a NFL starting quarterback put up 27 passing yards in a half of football? That’s what Smith did after completing just 4-of-12 passes in the opening half before being benched for Michael Vick to open the third. To make matters worse, Vick opened the second half by missing on 11 of his first 12 passes. At the end of the day, New York’s leading receiver was Jeremy Kerley with 24 yards.

The numbers get uglier. New York tallied 11 first downs, 151 yards of total offense and was 1-of-11 on third-down conversions. Heck, the offense didn’t cross midfield until halfway through the fourth quarter.

Now 1-4 on the season and losers of four consecutive, it doesn’t look like things are going to get better any time soon with the schedule Rex Ryan and Co. have coming up.

Now prepared to hand the keys to the offense back to Geno Smith next week against the Denver Broncos, there are two major questions that will likely surround Rex Ryan moving forward. Is his job safe and will he be the Jets head coach heading into a Week 11 bye? With the schedule you see above, it’s hard to imagine the Jets possessing more than two wins at that point. You can draw your own conclusions there.

8. Hard to Take Much Away from the Broncos and Cardinals Game 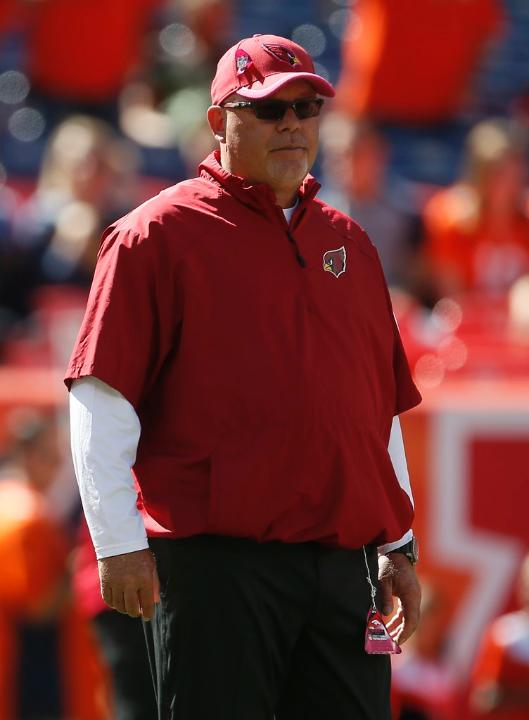 Courtesy of AZCardinals.com: Unfortunately for Arians and Co., they had to turn to a rookie QB in Denver.

It was a one-score game when Cardinals quarterback Drew Stanton left with a concussion early in the third quarter. And while rookie signal caller Logan Thomas connected with Andre Ellington on an 81-yard touchdown strike later in the quarter, there was no reason to believe Arizona was going to pull off the road victory.

At the end of the day, Thomas completed just that one pass in eight attempts. Meanwhile, Peyton Manning put up nearly 500 passing yards and four scores in an eventual 41-20 Broncos win. Needless to say, this wasn’t a barometer of where each team is at heading into Week 6. Unfortunately for the Cardinals, who are also without starting quarterback Carson Palmer, it remains to be seen whether Stanton will suit up against the Washington Redskins next Sunday. If not, Thomas will be thrown to the wolves much earlier than Bruce Arians and Co. would have liked. And in reality, that could be a major turning point in what has been a good season thus far for Arizona. 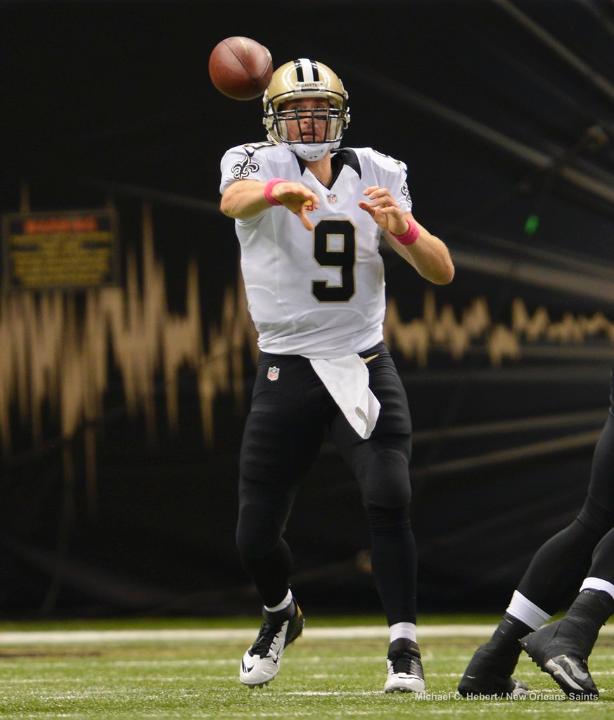 Courtesy of Saints.com: They might have won, but there are issues on both sides of the ball for the Saints.

New Orleans may have rebounded from losing three of its first four games, but it was nowhere near impressive against the Tampa Bay Buccaneers on Sunday. Falling down by two scores early in the fourth quarter, Drew Brees led two unanswered scoring drives to force overtime. Khiry Robinson then broke off an 18-yard touchdown in the extra period to give the Saints a 37-31 victory.

But in reality, the Saints should be more concerned than relieved following the win. Brees looked completely lost at times, throwing three interceptions in the game. While he wasn’t sacked once, the future Hall of Famer also saw consistent pressure throughout the outing and was hit seven times. Defensively, New Orleans allowed a previously dormant Buccaneers offense to put up two 80-yard scoring drives. Now without Jairus Byrd for the remainder of the season, Rob Ryan’s defense is going to have a hard time with what has to be considered a difficult schedule following a Week 6 bye. 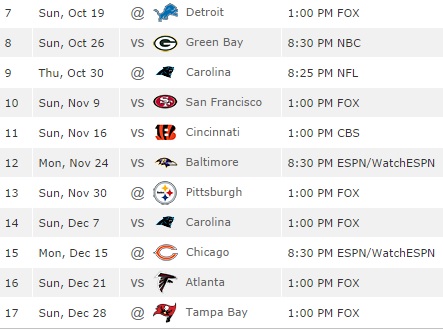 The good news here is that New Orleans plays in a division that might only take eight wins to earn a championship. With that said, there has to be cause for alarm heading into the bye week. And to be honest, Brees shares some of the blame for the Saints bad play thus far this season.

10. The New England Patriots are not Dead 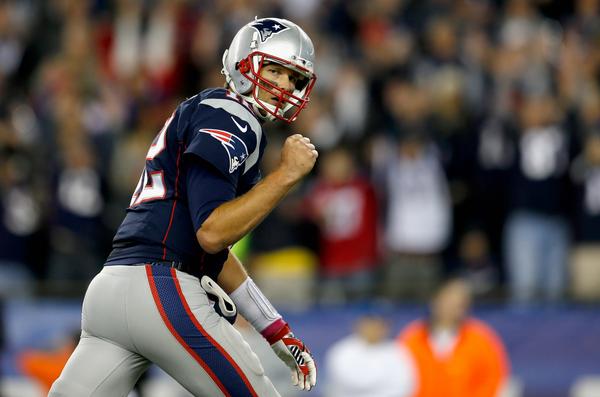 Courtesy of ESPN.com: Tom Brady and the Patriots bounced back in a big way.

Leading up to their Week 5 game against Cincinnati, it seemed that the world was falling in around the Patriots. They reportedly benched a wide receiver for mouthing off at offensive coordinator Josh McDaniels. And in another report, Tom Brady apparently wasn’t feeling feeling what the coaching staff was doing.

It’s amazing what one blowout win against what was considered the best team in the NFL can do for a team’s image. After destroying the Bengals to the tune of 43-17 on Sunday Night Football, the Patriots are back. And they’re back on a national stage making fun of all the skeptics (myself included) that concluded their run as legitimate Super Bowl contenders was over.

Tom Brady led two early scoring drives to put all these questions to rest. Meanwhile, New England destroyed Cincinnati in the trenches, going for a ridiculous 220 rushing yards on 46 attempts. While one game won’t change a team’s season, the Patriots appear to be back in the conversation in the AFC after falling on tough times through the first four weeks of the campaign.