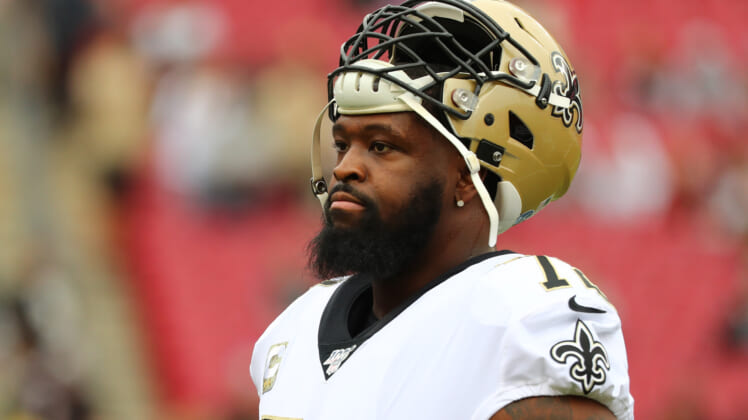 Three-time Pro Bowl left tackle Terron Armstead is on his way to meet with the Miami Dolphins on Monday.

One of the top remaining NFL free agents, the 30-year-old Armstead has played the process with patience in mind. He wanted to see what happened with the Deshaun Watson sweepstakes and whether his New Orleans Saints team would acquire the super star quarterback.

Once that did not happen with Watson heading to the Cleveland Browns, Armstead opted to restart the free agent process. This begins with a Dolphins team that is in need of a franchise-caliber left tackle. Below, we look at why Armstead makes perfect sense for the Fins.

Terron Armstead would be that elite blindside protector for Tua Tagovailoa

Right now, youngster Liam Eichenberg would be the Dolphins’ starting left tackle when the 2022 season comes calling. The second-round pick of the Dolphins last year, this former Notre Dame standout started 16 games as a rookie. However, he’s much more suited to play right tackle.

As for Armstead, Pro Football Focus has graded him out as the fifth-best left tackle in the NFL since the 2018 season. He’s been absolutely dominant, helping block for Drew Brees before his retirement and continuing with stellar play a season ago. Sure injuries might be a concern (21 games missed over the past five seasons). But a player of Armstead’s ilk rarely hits the open market. It’s time for general manager Chris Grier to pounce.

We mentioned Eichenberg as one starter in South Beach next season. Signing Armstead would allow him to be a mainstay at right tackle — providing new head coach Mike McDaniel with the elite-level book ends he had during his time with the San Francisco 49ers.

More than that, this move would enable 2020 first-round pick Austin Jackson to either slide inside to guard or become Miami’s swing tackle. That depth is needed with Armstead’s injury history. In short, adding the three-time Pro Bowler would solidify Miami’s offense line after it signed Connor Williams away from the Dallas Cowboys during NFL free agency.

While the Fins have not necessarily gone big-game hunting thus far in free agency, they have added several potential core pieces on both sides of the ball — primarily focusing on offense.

Noticing a theme here? Miami is doing everything possible to find players who fit McDaniel’s offense to a T. That included bringing in speedy former 49ers running back Raheem Mostert, who proved to be a record-breaking back during his time under McDaniel in San Francisco.

The Dolphnis also added up-and-coming former Cowboys wide receiver Cedrick Wilson to the mix. The former Boise State star broke out to the tune of 45 receptions for 602 yards and six touchdowns while catching 74% of his targets a season ago.

Signing Terron Armstead would be an expansion of the Dolphins’ offseason philosophy. That also included signing a Pro Bowl-caliber fullback in Alec Ingold to be their version of Kyle Juszczyk in South Beach.

With north of $16 million to spend in free agency, the Miami Dolphins can certainly afford to hand Armstead the $20 million annual salary that the market dictates. It fills a major need with a top-five player at a position of need and sets the Dolphins up to go best player available pretty much throughout the upcoming 2022 NFL Draft. It just makes too much sense.