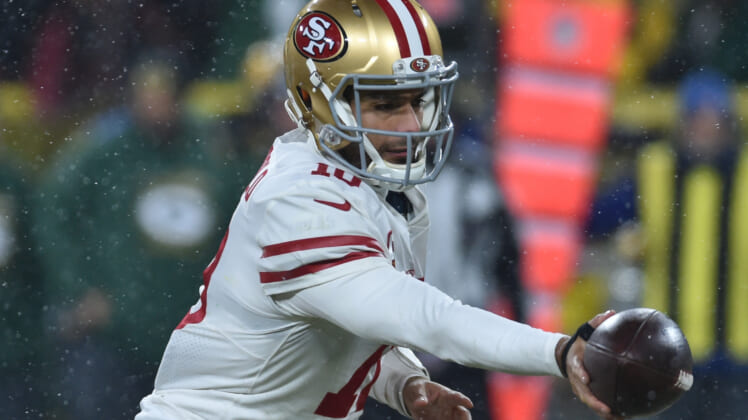 The San Francisco 49ers hoped a weak quarterback class in the NFL Draft would spark more interest in Jimmy Garoppolo. Instead, the franchise heads towards OTAs with Garoppolo still on the roster and an even smaller trade market for his services.

Garoppolo, who underwent shoulder surgery this offseason, is a viable quarterback option with an appealing resume. He boasts a 33-14 record as a starting quarterback and posted a strong 66-38 TD-INT ratio across five seasons in San Francisco.

When the NFL offseason began, many assumed he was the safest bet to be moved. He remains on the depth chart months later with Trey Lance promised the starting job and a majority of NFL teams now settled at quarterback.

Appearing on Sunday’s SportsCenter, NFL insider Jeremy Fowler shared that San Francisco remains very interested in trading Garoppolo. The franchise also believes the 30-year-old is a “good quarterback who should have suitors.’

While the 49ers hold that opinion, it doesn’t mean the evaluation of Garoppolo is shared around the league. The Carolina Panthers traded up to draft Matt Corral, the Houston Texans are very high on quarterback Davis Mills and the Pittsburgh Steelers spent a first-round pick on Kenny Pickett. 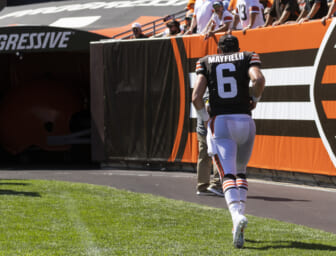 Why hasn’t Jimmy Garoppolo been traded?

Carrying a $26.95 million cap hit this season, NFL teams already had reason to be hesitant about Garoppolo. He played relatively well in Kyle Shanahan’s system, but there is reason to believe the production is a better testament to the coach than the quarterback.

It’s not even the biggest issue. Garoppolo’s offseason shoulder surgery is expected to limit how much he can throw this summer. Given the importance of a quarterback receiving practice reps to work with a new offense and receivers, that’s a problem for NFL teams.

“The problem remains that he’s got that shoulder issue that he had surgery on. He won’t be able to throw until the summer, so there was never going to be any urgency around Garoppolo during draft time.”

At this point, the 49ers might have to just keep Garoppolo on the roster. There is very little interest in a trade for him right now, with most waiting to see if he is ultimately released. San Francisco, like the Cleveland Browns with Baker Mayfield, will likely have to hold their highly-paid backup quarterback with the intention of seeing if another starter gets injured.

While significant injuries to starting quarterbacks are exceptionally rare, especially during the offseason and training camp, it might be San Francisco’s only hope of receiving anything of value for Garoppolo.