While the San Francisco 49ers are still stuck holding Jimmy Garoppolo on their roster, Trey Lance is fully expected to be the team’s starting quarterback for the 2022 NFL season.

Lance, the No. 3 pick in the 2021 NFL Draft, played just 179 total snaps across the entire season. While some initially thought he’d win the starting job over Garoppolo, head coach Kyle Shanahan stuck to his plan of using Lance’s rookie season as a redshirt year.

San Francisco is still following through with the timeline is set out when it traded three first-round picks for Lance. Garoppolo started in 2021 with the franchise intending to move him this offseason. A trade hasn’t come to fruition with momentum towards a deal slowing down. However, it hasn’t changed the organization’s quarterback plans for the upcoming season.

ESPN’s Jeremy Fowler reports that Lance is still getting the full impression from coaches that he will be the starter in 2022. While there is no timetable for a Garoppolo trade, his roster status won’t impact the team’s intentions with Lance.

It shouldn’t come as much of a surprise. San Francisco’s intention from the beginning seemed to be developing Lance for a year behind the scenes and then pushing him atop the depth chart the following year. By all accounts, everything regarding the quarterback succession plan is on schedule.

Expectations for Trey Lance in 2022

Fans are rightfully excited about Lance’s potential. On pure throwing ability alone, the 6-foot-4 passer offers a much stronger arm than Garoppolo even had at his peak. We saw the velocity and deep ball on full display during the preseason and in limited regular-season snaps. 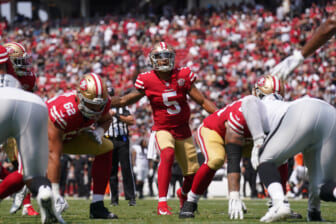 Naturally, fans are most excited about Lance’s athleticism. Once he becomes the starter, he’ll be one of the fastest quarterbacks in the NFL. Combine that with his size, this is a player capable of slipping out of sacks and rolling through arm tackles in the secondary to rip off big runs.

Shanahan is arguably the most creative mind in the NFL and the new-look 49ers’ offense could be far more explosive than anything fans saw from 2020-’21 with Garoppolo under center.

However, there should also be realistic expectations. Lance has attempted just 101 passes in meaningful games dating back to 2020. He played in a single college football game during the COVID-impacted 2020 season and barely saw the field in the NFL as a rookie.

Accuracy is still going to be a problem for him. While MVP candidate Josh Allen went from being a wildly erratic passer to one of the highest paid NFL players, he’s an outlier. Far more often than not, accuracy is something that doesn’t rapidly improve from college to the NFL.

If there’s one spot where Trey Lance’s weaknesses can be limited and his strengths emphasized, it’s with Shanahan and the 49ers. Fans should set realistically high expectations in 2022 and that means not betting on him to win MVP.