Who were the biggest steals on Day 2 of the 2021 NFL Draft? Find out our top five picks here. 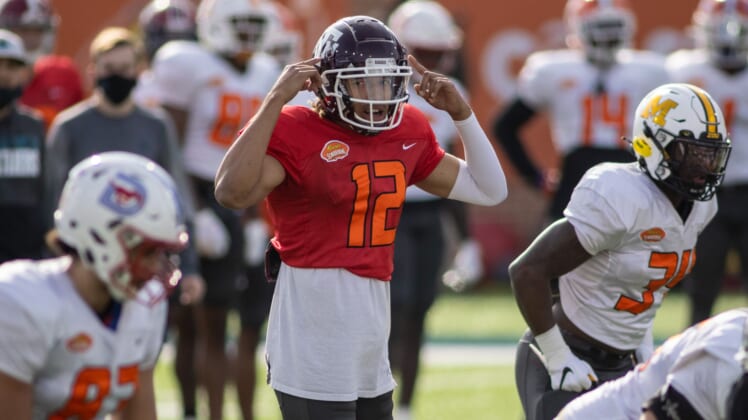 With Day 2 of the 2021 NFL Draft all wrapped up, there were inevitably winners and losers from Friday’s action, but it’s worth highlighting some of the very best value picks from the second and third rounds.

Some prospects slipped down draft boards due to medical concerns, but some of them were still available way too late for inexplicable reasons.

Check out this ranking of the five biggest steals from Day 2 of the draft.

On the Sportsnaut top 100 big board, Ojulari was the top-rated edge defender in the class. Apparent medical red flags in the week leading up to the draft dropped the Georgia product’s stock, but it’s hard to see why.

Granted, access to medical records has been uniquely limited this year. When was the last time a legitimate first-round-caliber prospect with medical concerns saw their careers cut significantly short?

Ojulari did tear his ACL as a high school senior, yet since then? Nothing major to be concerned about. He has tons of juice off the edge to help the Giants’ pass rush.

New York could’ve selected Ojulari 11th overall, and absent any injury issues, that would’ve been an appropriate slot. Instead, general manager Dave Gettleman traded back, collected an extra first-round pick in 2022 and still got Ojulari at 50th overall. Great stuff from the G-Men.

Ranked just one spot behind Ojulari on our big board at 17th, Owusu-Koramoah just shouldn’t have lasted this long. Browns executive Paul DePodesta admitted that the Notre Dame star was under consideration at 26th overall in Round 1.

Because Owusu-Koramoah has legitimately cornerback-level coverage skills to go with his aggressive, hard-hitting linebacker mentality, perhaps some teams saw him as a ‘tweener who wouldn’t pan out in the NFL. Whether that was the perception or not, Cleveland erupted when this pick was announced.

The Browns have lacked a playmaking linebacker in the heart of their defense, and Owusu-Koramoah can line up really anywhere on the front seven except defensive tackle, or stand in at strong safety or slot cornerback. He’s just a perfect scheme fit for Joe Woods’ defense, and other than depth on the interior defensive line, Cleveland now doesn’t have many holes at all on that side of the ball.

OK, so Marshall was in the top 25 on the ole big board and went 59th overall. He balled out at LSU without Justin Jefferson and Ja’Marr Chase to attract coverage attention in 2020, and didn’t have Joe Burrow as his quarterback.

Again, medical concerns dinged Marshall’s stock, but that feels like the most overrated, overblown narrative to emerge from the pre-draft process. For someone like Jaelan Phillips of the Miami Dolphins, who has an extensive concussion history and retired from football for a brief time? OK I get it.

Marshall’s red flags in this regard seemed trivial. Think about this: Joe Brady, the passing game coordinator for LSU’s 2019 national championship winning team, is now the Panthers’ offensive coordinator. He obviously knows Jefferson and Chase are unique, special players. He still thought highly enough of Marshall’s upside to pound the table for him in Round 2.

After losing Curtis Samuel in free agency, Carolina added another premier weapon in Marshall who’ll be so far ahead of the curve in terms of picking up the playbook. That should make new QB Sam Darnold very happy, as he’ll already have innate chemistry, too, with his former New York Jets wideout Robby Anderson.

You can bet new Chargers head coach Brandon Staley, who coordinated the Rams’ No. 1 defense last year, had at least somewhat of a say in this selection at 47th overall.

Asante Samuel Jr. has legitimate NFL bloodlines, a strong, productive track record at Florida State and phenomenal coverage skills. This isn’t some headline-grabbing selection based in nepotism. Samuel has earned the right to be a high NFL Draft pick, and honestly should’ve gone in the first round.

Chargers GM Tom Telesco is a paragon of patience and proved how much that can pay off when the board falls your way in the draft. He waited for Northwestern offensive lineman Rashawn Slater to fall to him at No. 13 on Day 1, and managed to fill another big need at a valuable position with Samuel in the second round.

Kirk Cousins, look out. That’s all I’m going to say. Kellen Mond was our QB6 in the 2021 class, and really couldn’t have landed in a much better situation.

Because of the financial commitment the Vikings have made to Cousins, they’re going to start him this coming year. Beyond that, he’ll be in the last season of his contract, and Mond will be nipping at his heels as a much differently-skilled QB.

Mond was a four-year starter at Texas A&M, and once the Tampa Bay Buccaneers chose Kyle Trask 64th overall to end the second round, Minnesota GM Rick Spielman made sure he got his potential successor to Cousins near the top of Round 3 at No. 66.

With legitimate dual-threat ability, plenty of experience accumulated against SEC competition and a pro-style background, Mond can definitely step in one day to be the Vikings’ starter behind a stellar, Dalvin Cook-led rushing attack.

Given the improvement he showed in his final year of college and lesser draft status, Mond’s narrative is reminiscent of Dallas Cowboys QB Dak Prescott, and that worked out pretty well for America’s Team.