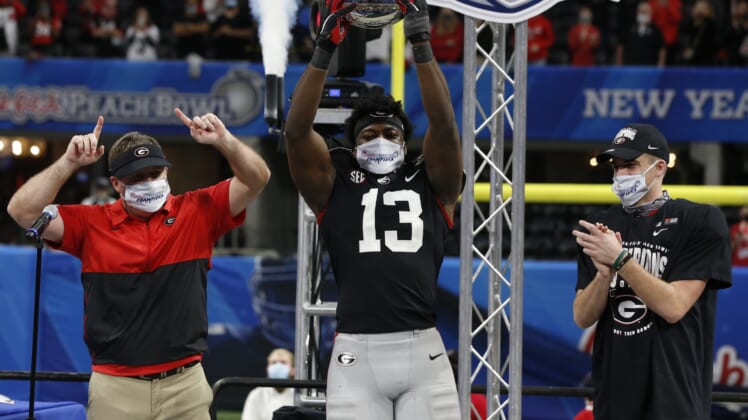 One of the 2021 NFL Draft’s most talented pass-rushers fell to Round 2, but the New York Giants finally picked Georgia’s Azeez Ojulari at No. 50 overall.

Ojulari was rated 16th on Sportsnaut’s top 100 big board and the top edge defender, but Tony Pauline of Pro Football Network reported that leading up to the draft, medical red flags brought about by knee and ankle injuries caused Ojulari’s stock to crash.

While there is a history there, as Ojulari tore his ACL as a high school senior, injuries weren’t really a problem of late at least in terms of hindering the Bulldogs star’s production on the field.

Playing in the SEC as a two-year starter, Ojulari shined with 17.5 tackles for loss, 15 sacks and five forced fumbles in that span.

Although he won’t wow you with size, there’s no question Ojulari has enough functional play strength at the point of attack to get it done against the run. But where he really shines is bending off the edge, converting speed to power and closing quickly on the opposing quarterback.

Having faced off against elite college competition and learned under an excellent defensive coach in Kirby Smart, it’s very possible Ojulari can step in and make an impact as an immediate starter in the NFL.

It’ll be interesting to see how Ojulari fares starting out if his injury concerns are real, though. Access to prospects’ key medical information has been a significant issue this year for teams.

It could very well be that, like the Tennessee Titans’ bold pick of Virginia Tech cornerback Caleb Farley, the Giants and Dave Gettleman rolled the dice and got a defensive franchise cornerstone in Ojulari on Day 2.

Ojulari brings a unique, leaner pass-rusher to New York’s defense, and should be able to feast with the likes of Leonard Williams and Dexter Lawrence taking on blockers on the interior.