Is Caleb Farley the steal of the 2021 NFL Draft? After the Tennessee Titans took him at No. 22 overall, there's a strong case to be made. 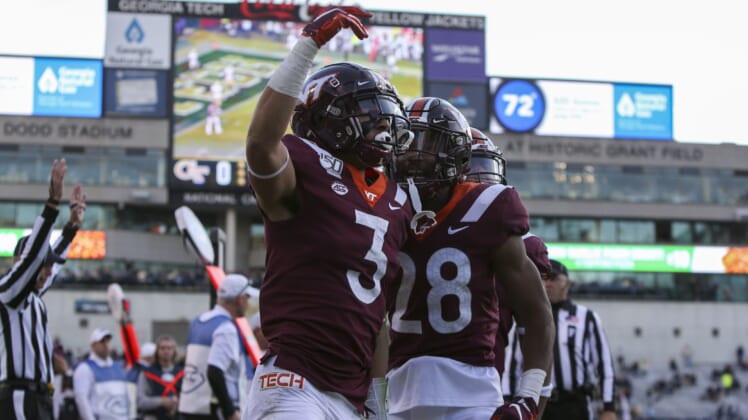 The Tennessee Titans patiently waited until the 22nd overall pick on Thursday night to select Virginia Tech cornerback Caleb Farley in the 2021 NFL Draft. It was one of the boldest moves of the night — and could result in the Titans landing the steal of the entire draft.

Credit Tennessee for doing this. General manager Jon Robinson got burned badly in 2020 when first-round right tackle Isaiah Wilson essentially quit on the team, got released after one year, and has already flamed out with the Miami Dolphins since. It’d have been easy to play it safe.

But Robinson didn’t, and now the Titans have the cornerback with the highest upside in the 2021 class in Farley.

Had it not been for a microdiscectomy, which is a back procedure, Farley would’ve easily been a top-10 pick. He’s also suffered a torn ACL from several years back, yet that didn’t impact his play on the field.

Those who opted out of the 2020 season due to the COVID-19 pandemic were rolling the dice in terms of whether they’d retain their status as a first-round prospect. Farley was an opt-out player after an exceptional 2019 campaign, and because he sat out and still had medical red flags, he dropped.

The fact that Tennessee still took a chance on Thursday night despite the Wilson fiasco of yesteryear and that context for Farley speaks to the Hokies star’s immense talent.

Caleb Farley is most physically gifted cornerback since Jalen Ramsey

Coming out of Florida State, Jalen Ramsey was a surefire, can’t-miss pick who the Jacksonville Jaguars chose fifth overall in 2016. Since then, he’s been traded to the Los Angeles Rams already, but Ramsey is a four-time Pro Bowler and two-time first-team All-Pro.

That’s the kind of upside we’re talking about with Farley. He professes to run something in the 4.2-second range in the 40-yard dash, and if that sounds hyperbolic, watch his game tape and see what you think.

Despite converting from wide receiver to cornerback after stepped onto Virginia Tech’s campus, Farley is already showing signs of elite form at the position. While some raw prospects might scare teams off, it’s actually encouraging how far along Farley considering his relative inexperience.

When it’s an athlete like Farley, who has elite change of direction and ball skills for days thanks to his time as a wideout, it’s easier to get over some of the areas he needs to refine his technique. Again, the physical tools, instincts and incredible recovering ability give him a greater margin for error — even against NFL pass-catchers.

Farley is still just scratching the surface of what he can be, but just look at his two seasons at cornerback for the Hokies. After registering a meager 56.8 player grade by Pro Football Focus’ metrics, Farley bounced back in 2019 with an 86.9 rating, which was 13th out of 618 qualifying cornerbacks.

Now, what do these PFF grades mean exactly? Take this in: on 50 targets in 2019 out of 396 coverage snaps — yeah, quarterbacks didn’t want to challenge him often — Farley allowed 18 completions for 257 yards and one touchdown while grabbing four interceptions. That’s good for a 26.8 opponent’s passer rating.

Not only will Farley lock down one side of the field in the NFL as long as he stays healthy, but he’ll help an underwhelming Titans pass rush get home more often. Because of all these factors, you can bet Farley may well be the steal of the 2021 NFL Draft.