It’s no surprise that the Philadelphia 76ers are among the teams most talked about on the trade market leading up to the 2022 NBA Draft next week.

President of basketball operations Daryl Morey has been the most-active front office head throughout his career. That included acquiring James Harden in a blockbuster deal ahead of the in-season NBA trade deadline on February 10.

Coming off a second-round exit at the hands of the Miami Heat in the 2022 NBA Playoffs, Philadelphia needs to upgrade its roster behind the big two of Harden and reigning MVP finalist Joel Embiid.

According to Keith Pompey of the Philadelphia Inquirer, the 76ers are gauging trade interest in several veteran role players leading up to the draft.

Veteran forward Danny Green is the most-interesting inclusion here. He has a non-guaranteed salary of $10 million for next season. Green suffered a torn ACL and LCL in the 2022 NBA Playoffs. He’s expected to miss the 2022-23 campaign. Green’s deal now becomes somewhat valuable in that it could offer another team $10 million in cap savings.

As for Harris, his contract continues to be an issue when it comes to Philadelphia gauging trade interest.

The 76ers had attempted to trade Harris several times in the past, including trying to send him to the Brooklyn Nets for the aforementioned Harden back in February. Despite his large contract, Harris can still be considered a top-end contributor on a contending team.

Thybulle, 25, is also an intriguing figure here in tht the former first-round pick has earned consecutive All-NBA Defensive Team honors. Unfortunately, his inability to do anything on offense (4.8 PPG through three NBA seasons) has made the Washington product a liability on that end of the court.

Either way, let’s look at three Philadelphia 76ers trade scenarios leading up to next week’s draft.

Related: Philadelphia 76ers Tyrese Maxey will reportedly be ‘close to untouchable’ this offseason

Indiana has shown strong interest in Korkmaz over the past several months. The idea for the retooling Pacers is to see if the 24-year-old wing can overcome recent struggles with a change of scenery.

Prior to shooting 29% from three-point range in 2021-22, the Turkey native had been stellar from distance. That included shooting a combined 39% over the previous two seasons. Adding Korkmaz at the three to go with Tyrese Haliburton and Chris Duarte in the backcourt would be nice. Doing so while moving off only two second-round picks would be even better.

In turn, Philadelpia adds the first selection in the second round. This gives Morey and Co. more flexibility in that said trade could be conducted ahead of the draft itself with Indiana taking on all of Korkmaz’s $5 million salary for next season. This hypothetical deal would be a precursor to another draft-night trade for Philadelphia.

Related: NBA Draft trades we could see next week

Denver already acquired the 30th pick in next week’s draft from the Oklahoma City Thunder in a deal that included JaMychal Green heading out. The idea for new front office head Calvin Booth was to create more flexibility, both under the cap and from a logistical standpoint.

Booth puts that to good use here by acquiring two still-young guards who can contribute to their rotation in 2023-23. As we saw last season with Jamal Murray sidelined to injury, the backcourt was a major issue for Denver en route to a first-round exit at the hands of the Golden State Warriors. 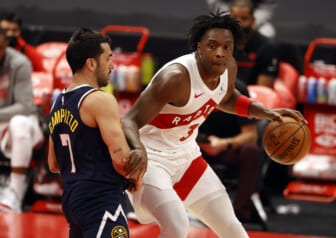 Speaking of flexibility, Philadelphia would then be able to use the 30th pick it acquired here and its original first-rounder (23rd overall) as part of a larger-scale trade following the draft. The 76ers are said to be going big-game hunting. Adding two first-round picks in any potential package given their lack of selections down the road would help in that regard.

As for Morris, he’d provide some absolutely elite things in the second unit behind Harden and Tyrese Maxey. Starting in place of the injured Murray last season, the 26-year-old guard averaged 12.6 points and 4.4 assists on 40% shooting from distance. Morris could also be used as part of a larger trade we mentioned above.

Not a single Warriors fan wants to hear this given the way Wiggins is playing in the NBA Finals. But finances might force Golden State to trade him this summer. It’s been a major talking point with the improved three-and-D wing slated to become a free agent following the 2022-23 season. In short, the Warriors are already paying a record amount into the luxury tax. Signing him to a new max-level contract would add more to said tax.

Instead, Golden State takes on Harris and the two years he has remaining on his current deal. He could take over for Wiggins short-term before Jonathan Kuminga is ready to start. Golden State could also flip Harris, its two first-round picks and a youngster to acquire another elite talent. It gives the defending Western Conference champions a ton of avenues to pursue moving forward.

This move would be rather simple for Philadelphia. It adds Wiggins at a need position to go with Maxey, Harden and Embiid. His ability to both score and play elite-level defense would be an absolutely perfect fit in Philadelphia. Being able to acquire Wiggins without giving up Maxey would also be seen as a boon.