NFL coaching hot seat: Head coaches who could be fired in 2021 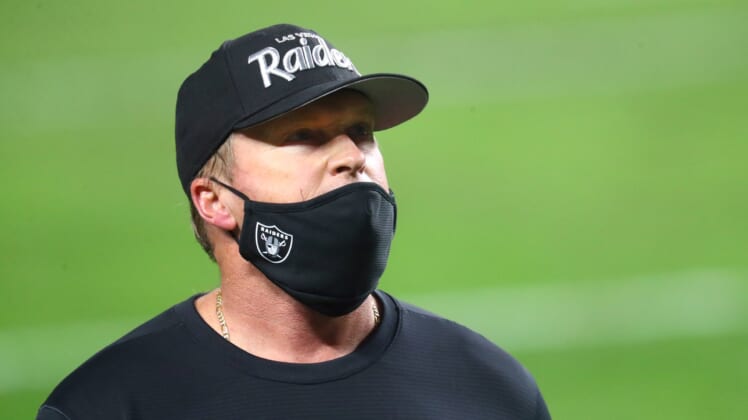 As teams make early preparations for the 2021 season, the NFL coaching hot seat is just starting to warm up. While training camp is still a few months away, a busy offseason is putting a ton of pressure on head coaches throughout the league to deliver in 2021.

Turnover in the coaching ranks is guaranteed. From Week 4 of the 2020 season through February, seven NFL head coaches were fired. For those lucky enough to escape being axed, they likely know that their jobs will be on the line this season. Of course, that’s even more true when you consider some of the moves their respective front offices made to improve the roster.

Let’s dive into the NFL coaching hot seat for 2021 and a few of the coaches who likely already feel the temperature rising steadily.

NFL coaching hot seat: What head coaches will be fired next season?

The Las Vegas Raiders didn’t just swing for the fences when they hired Jon Gruden, they bought a $100 million bat and closed their eyes. Jon Gruden isn’t a bad football coach, he’s proven himself as a leader and strategist throughout his coaching career. But the Raiders made a costly mistake by giving him control over the 53-man roster.

Mike Mayock does have some say in personnel, but everyone knows who is running the show. Despite Derek Carr’s stats and performance justifying his reputation and contract, Gruden has explored moving on from him every offseason. It would be one thing if he just toyed with the franchise quarterback. But this offseason, Gruden ripped apart one of the NFL’s best offensive lines and overpaid for a No. 2 running back.

Right now, the Raiders’ roster looks worse than the one it finished an 8-8 season with. To make matters worse, the AFC West got a lot better this spring. Even finishing 8-8 in 2021 might be an accomplishment and just avoiding another late-season collapse might be the only tolerable outcome. If Gruden isn’t willing to give up some of his power on 53-man roster decisions, Las Vegas will eventually need to consider someone else.

Credit to the Arizona Cardinals for taking an all-in approach this offseason. A healthy J.J. Watt and the return of Chandler Jones will do wonders for this pass rush, aiding a defense that ran into trouble late in the year. On top of that, the Cardinals signed A.J. Green and traded for Pro Bowl center Rodney Hudson. So, Kyler Murray will enter his third NFL season with an even better supporting cast.

The pressure all falls on Kliff Kingsbury. Arizona took a chance on him as a head coach, at a time when he was simply going to be the USC Trojans’ offensive coordinator. After a 5-10-1 season in his first year, the Cardinals improved to 8-8 this past season and there was a ton of buzz about the playoffs.

But this team crashed hard in the second half of the season. Coming out of the bye with a 5-2 record, Arizona lost to the Miami Dolphins and then needed a DeAndre Hopkins miracle catch to beat the Buffalo Bills. If not for that heroic play, a more intense microscope sees a 7-9 record and multiple gaffes by Kingsbury. If the Cards don’t reach the playoffs next season, it’s hard to believe the coach who couldn’t win in college with Patrick Mahomes will stick around for another year.

The Denver Broncos recognize that Vic Fangio isn’t entirely responsible for the problems at quarterback. John Elway drafted Drew Lock and it’s pretty evident that was a bad decision. That’s part of the reason why Denver made its decision early, giving this 62-year-old coach another shot in what will likely be his last head-coaching opportunity.

Going from 7-19 to 5-11 certainly isn’t what the Broncos expected when they hired Fangio. It’s also not like his brilliant defensive mind has translated to this team being suffocating defensively. In fact, the Broncos ranked 21st in yards allowed and 21st in points surrendered last year.

If Denver lands a player like Justin Fields, things could turn around. Huge additions were made to the secondary this offseason, with cornerback going from a strength to a weakness. Plus, Von Miller will be back on the field next season. It’s the ingredients for a quality defense and if the quarterback situation improves, playing in the Wild Card Round is possible. If the Broncos finish .500 or below, though, Fangio will be looking for gig as a defensive coordinator.

Cincinnati took a big risk on Zac Taylor in the 2019 offseason. He was wildly inexperienced, largely getting the job because he worked under Sean McVay and seemed to have a role in the Los Angeles Rams’ explosive offense. Things went horribly in his first season, finishing 2-14. But the arrival of Joe Burrow was supposed to change things.

Read More: How the Cincinnati Bengals can revolutionize the NFL Draft

Burrow looked great until an abysmal offensive line led to his devastating knee injury, but the Bengals rarely looked like a competitive team. A coach brought in for his offensive mind was overseeing an aerial attack that was the 27th-ranked passing offense in the NFL.

Six wins in two seasons are inexcusable, even when considering the state of this roster. But the Bengals show patience with their head coaches and seem willing to let Taylor learn the ropes of coaching, while he grooms the franchise quarterback. If the next season ends in only five wins and this offense doesn’t show significant improvement, though, the Bengals have to move on.

You have to admire Mike McCarthy. He convinced everyone that he spent a year embracing analytics, committing himself to learn about the new information available to coaches and finding ways to implement it. That caught the eye of the Dallas Cowboys, who practically hired him on the spot after learning he analyzed every snap from the Cowboys’ 2019 season. Then, McCarthy admitted that was a lie in his introductory press conference.

Now, it’s not McCarthy’s fault that Dak Prescott suffered a gruesome, season-ending injury. But the Cowboys were 2-2, with narrow victories over the New York Giants and Dallas Cowboys, after Week 5. The bigger knock on him is the hiring of Mike Nolan, a long-time friend who proved to be a disaster as the Cowboys’ defensive coordinator.

Jerry Jones has no problem being loyal to his employees, in most cases. He stuck by Jason Garrett for a long time and seems to be a big fan of McCarthy. But Dallas just made a huge commitment to Kellen Moore to prevent him from becoming the Boise State head coach. If the Cowboys don’t meet Jones’ expectations in 2021, he already has a successor in mind.

A three-game winning streak saved Matt Nagy. Just when it seemed like the Chicago Bears were ready to fire him, Mitchell Trubisky did just enough in a simplified offense to help this team reach the playoffs. Ironically, it might hurt this team’s future.

Finishing the season 8-8, instead of 6-10 or 5-11, cost the Bears dearly in the NFL Draft order. Not only did it take them out of position to draft one of the top quarterbacks, the difference likely kept them from a Russell Wilson trade. Now, Chicago will be rolling into the 2021 season with Andy Dalton under center.

The defense is going to be worse than it was last season, putting even more pressure on this offense to finally step up. Realizing that, Nagy and general manager Ryan Pace put their chips on Dalton. This bet is going to end with both men being fired and the Bears in need of a complete overhaul next offseason. The Trubisky effect is very real.