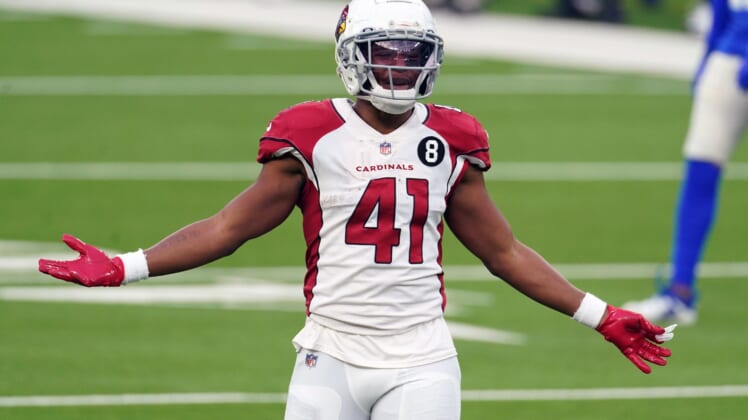 A bizarre offseason for the Las Vegas Raiders continued Thursday, with head coach Jon Gruden continuing a major overhaul of the offense by signing running back Kenyan Drake.

In a matter of days, Las Vegas has changed the look of its offense. While Derek Carr will remain under center, an offensive line that was once one of the NFL’s best will look completely different next season. Amid all the changes upfront, the Raiders are now set to use some of their money on a No. 2 running back to pair with Josh Jacobs.

According to ESPN’s Adam Schefter, Drake is signing a two-year deal worth $11 million and an additional $3 million can be earned through incentives.

The moves came as a surprise, given all the changes made by Gruden in recent weeks. Las Vegas traded guard Gabe Jackson to the Seattle Seahawks, sent right tackle Trent Brown to the New England Patriots and dealt Pro Bowl center Rodney Hudson to the Arizona Cardinals.

Las Vegas also released Richie Incognito, but later re-signed him. Additionally, Nelson Agholor has been replaced by John Brown after the receiver agreed to a one-year contract.

Signing Drake is an odd move, based on how well Josh Jacobs performed in 2020. He rushed for 1,065 yards and 12 touchdowns in 15 games. Many expected him to be the featured back in 2021, taking on a three-down role and proving he was worth the No. 24 overall pick in the 2019 NFL Draft.

Now, the Raiders will likely use a committee backfield next season. With both players running behind an offensive line that will take a significant step back.

As for Drake, this certainly isn’t the scenario he saw unfolding a year ago. After rushing for 643 yards and eight touchdowns in eight games during the 2019 season with Arizona, he returned to the team on a transition tag. He wasn’t quite as explosive over 15 games, averaging just 4.0 yards per carry, but rushed for 955 yards and 10 touchdowns.

Now, Drake will serve as the change-of-pace back to Jacobs and contribute on passing downs. Given the state of the Raiders’ offensive line, Carr might be looking his way quite often.