When looking at Masters odds to win the 2022 tournament, it’s rather interesting. For those who only follow majors, it will come as a suprise that the three golfers with the best odds to take home the green jacket have never won this major event.

With that said, all three pros are better known to the golfing community as a whole. Of course, we’re talking about Jon Rahm, Justin Thomas and Cameron Smith.

As we saw with Hideki Matsuyama’s historic win last season, there’s always a first for everything.

Meanwhile, all-time great and five-time Masters champion Tiger Woods is making his long-awaited return to the professional ranks after a horrific automobile accident back in February of 2021. Where do his Masters odds stand with things about to get going in Augusta? We look at this and more below with information provided by BetMGM.

The No. 1 player on the tour, this 25-year-old former Texas Longhorn star has three wins and six top-10 finishes in just 12 events during the 2022 PGA season. That included defeating Patrick Cantlay in a playoff at the Phoenix Open back in February.

With that said, Scheffler hasn’t finished better than 19th in two Masters appearances. The good news? He does have four top-10 finishes in nine major tournaments. Augusta is not too big of a stage for the Dallas native.

The hot streak is continuing for Scheffler. He enters the final day of Masters 2022 atop the leaderboard, holding a three-shot lead over Cameron Smith. Barring disaster, Scheffler will win his first Masters.

The PGA Championship winner back in 2017, Thomas has four other top-10 major finishes throughout his celebrated career. That includes a top-four finish in the postponed 2020 Masters Tournament.

Thomas, 28, has four top-five finishes in nine events this season. Most recently, he shot 16-under-par in the Valspar Championship to finish third overall.

Entering the final day of 2022 US Masters, Thomas has the fifth-best odds to win. Sitting eight strokes back of Scottie Scheffler, it’s highly unlikely.

In an out of the PGA Tour earlier in his career, Smith has ascended the ladder in a big way and is now the sixth-ranked player. For good reason. The Australia native just won THE PLAYERS Championship in his last event with an eye-opening minus-13 at TPC Sawgrass back in March. He put on a putting display in that one.

That performance came roughly two months after Smith took the title at the Sentry Tournament of Champions with a minus-34. As for majors go, he’s put up two consecutive top-10 finishes in the Masters and lost out as runner-up to Matsuyama last year. 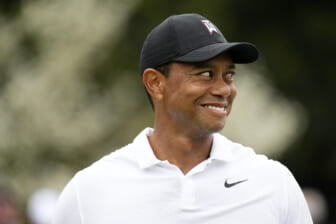 Also Read:
2022 Masters: 10 golfers with the best chance to win the major

The No. 2 player in the world right now, Rahm is coming off a win in the U.S. Open last year and continues to play great golf. The 27-year-old Spain native has three top-10 finishes this season. That includes a minus-14 mark in the Farmers Insurance Open back in late January.

As for Rahm’s Masters odds, he’s finished in the top five in each of the past four tournaments at Augusta. However, his chances at winning are almost certainly over as he enters Sunday +7 and tied for 41st place.

Finally, a former champion of this major makes the list with the best Masters odds for 2022. At +1600, Johnson seems to be a pretty trendy pick.

His game seems to translate very well to Augusta despite missing the cut last year. Prior to that, he had put up five consecutive top-10 finishes in the Masters. That included tying with Xander Schauffele for the second spot behind Tiger Woods back in 2019. As for this season, he has only one top-10 finish in five events. Hence, the longer Masters odds heading into Thursday’s opening round.

On Sunday, Johnson would need an all-time historic comeback to win. He’s at +1, tied for ninth, but is 10 strokes back on the Masters Leaderboard.

One of the better golfers on the PGA circuit, Spieth has struggled to make an impact thus far this season. He has just one top-10 finish in nine events and missed the cut altogether at TPC Sawgrass back in March. His only top-10 finish came at the famed AT&T Pebble Beach course in February.

It is still hard to ignore what Spieth has done in Augusta, leading us to believe that his Masters odds could end up being a good bet. The dude has five top-three finishes in the annual event and most recently finished third last year behind Matsuyama and Cameron Smith.

A winner of four major championships throughout his career, McIlroy is still attempting to collect his first green jacket. In fact, he missed out on the cut altogether last year at Augusta.

With that said, he’s a popular threat to earn that rare Grand Slam on the PGA Tour. The reasoning? McIlroy has come close with six career top-10 Masters finishes. Most infamously, McIlroy held a 54-hole lead back in 2011 before a final round 80 dropped him all the way down to the 15th spot. Revenge could be on his mind more than a decade later.

This Oklahoma State University product should be considered a solidly popular bet. He has four top-10 finishes in 10 events this season, including thee consecutive top-10 postings before some struggles at the Valspar Championship.

The interesting dynamic here is that Hovland has only jumped on to the scene this season. his previous PGA tour wins came at the Puerto Rico Open (2020), Mayakoba Golf Classic (2020) and World Wide Technology Championship (2021). Those aren’t necessarily big-name tournaments. In two Masters appearances, he’s finished no better than tied for 21st.

The 30-year-old Matsuyama is now a living legend in Japan after his historic win in the Masters last season. His eight PGA Tour wins also ranks No. 1 all-time among Japanese born players.

So, why does Matsuyama have such long Masters odds? It’s rather simple. He’s struggled recently with a No. 39 finish at the The Genesis Invitational before finishing 20th at the Arnold Palmer Invitational. Just recently having to withdraw from the Texas Open due to a neck injury less than a week before the Masters starts.

The man. The myth. The legend. Having not played in a PGA-sanctioned event since almost losing his leg in an automobile accident back in February of 2022, Woods will give it a go. With +4000 Masters odds, it also wouldn’t be a surprise if Vegas saw a lot of bets on him ahead of Round 1 on Thursday.

Woods reportedly looked great during two nine-round practice events at the Augusta course on Sunday and Monday. It also doesn’t take a genius to realize his game has always translated well to the Masters. A five-time champion of this event, Woods has tallied a record 13 top-10 finishes in the major. Simply put, don’t bet against Tiger.