2022 Masters: 10 golfers with the best chance to win the major

The 2022 Masters is the most-coveted tournament on the PGA calendar. The winner not only receives a trophy replicating the clubhouse at Augusta National Golf Club, but also the Green Jacket. It is presented by the previous champion to the victor.

Here are the 10 golfers who have the best chance to win the 2022 Masters.

Last year, Will Zalatoris made his Masters’ debut and did in style.

The 2021 PGA Tour Rookie of the Year was the runner-up a year ago and almost became the first golfer since 1979 to win the Masters as a tournament rookie. In all four rounds, Zalatoris was under par and shot a final round 70 — finishing one shot back of 2021 Masters Champion Hideki Matsuyama.

With his success in his first Masters last year, momentum is in his favor heading into this week.

Like Zalatoris, Cameron Smith was also a runner-up at the Masters. That came back in 2020. That Masters was held in November and was pushed back due to the COVID-19 pandemic. After his tie for second place two years ago, Smith finished inside the top-10 last year after firing a final round 70 to complete the tournament.

In his last five previous Masters Tournament appearances, Smith has three top-10s, That also included a top-five finish in 2018.

If Cameron Smith wins this week, he would become second golfer to win the Players Championship and the Masters in the same year, joining only Tiger Woods when he accomplished that feat in 2001.

Earlier in the week, Tiger Woods has said he was a “game-time decision” before Thursday’s first round gets underway. After taking part in two practice rounds, he’s now ready to go.

Despite coming off a car accident over a year ago, Woods’ mentality, especially when it comes to a major tournament like the 2022 Masters Tournament, is always high as this event has been the goal for his return.

Already inducted into the World Golf Hall of Fame last month, Woods is still looking to compete at the highest level — hoping to make an even bigger comeback than his 2019 Masters victory. 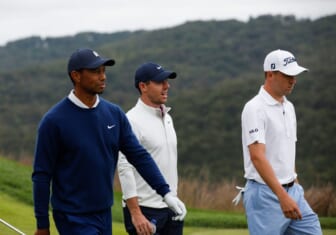 Despite missing the cut last year at Augusta, Patrick Cantlay finished the PGA Tour season strong as he won the Tour Championship at Eastlake. It led to him earning 2021 PGA Tour Player of the Year honors.

Last year defined how difficult the Masters was as Cantlay shot a first-round 79, followed by a second-round 73.

Cantlay’s best finish for the Masters Tournament came in 2019 when he tied for ninth, which was highlighted by a third round eight-under 64 that was one of top scores that day.

Since last year, Cantlay has been working on his putting and currently leads the Tour with a 46.97 one-putt percentage. In addition to this, Cantlay is fourth among players in avoiding three putts this season.

Some say if the putter can get hot, especially at Augusta, watch out.

Hideki Matsuyama, who became the first Japanese-born player to win the Masters Tournament last year, is looking become the fourth player ever to win the green jacket in back-to-back years. If Matsuyama can pull off the victory, he would join three hall of fame golfers in Woods, Sir Nick Faldo and Jack Nicklaus to accomplish that feat.

If there has been anybody as consistent when it comes to major tournaments over the last four years, it is Xander Schauffele. In each of the four Masters tournaments Schauffele has participated in, the San Diego native has recorded two, top-three finishes, including runner-up in 2019.

Since last season, Schauffele, who is entering his fifth Masters, won the Gold Medal at last year’s Summer Olympics and is looking to add a green jacket for his first win on the PGA Tour in three years.

Rory McIlroy’s first Masters Tournament was in 2009 when he tied for 20th.  Since then, McIlroy’s has finished in the top 10 in six of the last eight Masters, highlighted by his fourth-place finish in 2015.

The former world No. 1 golfer is on the brink of achieving golf’s career grand slam with a win at Augusta as McIlroy has won four majors. McIlroy had an opportunity to win a green jacket in 2011 after having the 54-hole lead, but a final round 80 pushed him out of the top 10 for a 15th place finish.

A lot has changed in the 11 years since McIlroy’s third Masters appearance as he hopes to don the green jacket and complete one of golf’s coveted goals.

Dustin Johnson, 37, enters the 2022 Masters Tournament as the world’s eighth best golfer and is looking to get his second win at Augusta in three years. Johnson, who won the 2020 Masters when it was held in November of that year, scored a 20-under 268 which broke the 72-hole scoring record that was previously held by Woods and Jordan Spieth.

This is Johnson’s 12th Masters and despite missing the cut last year, he had five straight top-10 finishes from 2015-2020.

One of the hottest players in the game right now, Scottie Scheffler is looking to get his fourth win in a span of two months.

After winning the Waste Management Phoenix Open in Arizona for his first PGA Tour victory, Scheffler also got wins at the Arnold Palmer Invitational on March 6, and at the WGC Dell Technologies Match Play event on March 27.

On Jan. 30, 2022, Scheffler ranked No. 14 in the Official World Golf Rankings. Following his Dell Technologies Match Play victory, the 25-year-old vaulted four spots from No. 5 all the way to the top.

Scheffler has a commanding lead in the FedEx Cup standings as we are near the midway point with a lead of over 750 points. He is guaranteed to leave the Masters with the top spot in the Cup standings no matter what happens.

The only question for Scheffler is can he stay hot and win?

Prior to Scheffler taking over the world’s top golfer, John Rahm had been No. 1 for 33 weeks while finishing in the top-8 in all four majors last season, which also includes a victory at the U.S. Open.

At Augusta, Rahm has never finished higher than 28th and has four straight top-10 finishes in his five tournament appearances.

Entering the first the major of the season, the Spaniard has finished inside the top-10 four times, including a runner-up at the Sentry Tournament of Champions in January and a third-place finish at the Farmers Insurance Open. He’s our favorite to win the 2022 Masters.