The New England Patriots sat back late last month and saw former Alabama quarterback Mac Jones fall to them with the 15th pick in the 2021 NFL Draft.

Leading up to the annual event, rumors persisted that the Patriots were attempting to move into the top 10 for a signal caller of the future. Meanwhile, suggestions also concluded that the reigning Heisman finalist might go as high as No. 3 overall to the San Francisco 49ers.

At the end of the day, it appears that both Mac Jones and the Patriots find a perfect fit. He’s seen as more pro-ready than any quarterback in the class outside of No. 1 pick Trevor Lawrence. For a Patriots team still attempting to find a long-term replacement for Tom Brady, this could not have represented better timing.

Even after re-signing struggling veteran quarterback Cam Newton, there’s every reason to believe Jones will compete for the starting job during training camp. Below, we look at three reasons why he should in fact be QB1.

As we noted above, Jones was linked to San Francisco throughout the pre-draft process. There’s good reason for this. While the quarterback does not boast anywhere near the highest ceiling in the 2021 NFL Draft class, he might have the highest floor. He’s also been seen as a more-talented version of 49ers quarterback Jimmy Garoppolo, who the Patriots had interest in reacquiring ahead of the draft.

As for the Pats’ scheme and personnel, it seems to fit Jones more than Newton. The signing of former 49ers wide receiver Kendrick Bourne as well as Nelson Agholor adds another layer to this. Both succeeded last season in timing-based offenses. Jones is coming from said type of offense in Tuscaloosa. Add in the presence of recently-acquired tight end Jonnu Smith and Hunter Henry, and Jones is set up to succeed out of the gate.

No, Cam Newton is not the answer

It was surprising to see New England retain the 31-year-old Newton in free agency. Indications late last season were that he’d be one-and-done with the Patriots. However, a surprisingly solid relationship between the former NFL MVP and head coach Bill Belichick led to a reunion.

With that said, Newton’s return comes via a one-year contract in which he’s guaranteed a mere $3.5 million. That’s backup money. It also comes after a 2020 campaign in which the quarterback threw a grand total of eight touchdowns in 15 starts. That’s just not going to cut it. Why hold out hope that a pre-injury version of Newton will somehow just show up come September? We’re past that point.

Why wait to start the Mac Jones era?

This is the biggest reason why New England should start Mac Jones out of the gate. Existing in an AFC East that has the Miami Dolphins, New York Jets and Buffalo Bills seemingly boasting young franchise quarterbacks, there’s no reason for New England to delay the inevitable. Sure Belichick is 69 years old. But he also knows that this Patriots squad is not a top-end division title contender.

That’s where Jones comes into play. By starting him out of the gate, New England could expedite the process of returning to contention. A mediocre season with Newton under center simply won’t help Jones as he holds a clipboard. In turn, any return to relevance will be delayed. 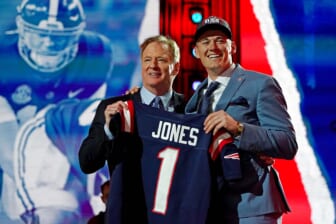