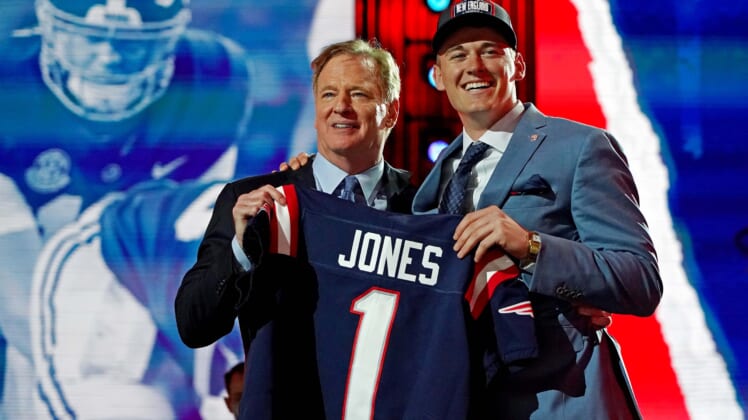 Apr 29, 2021; Cleveland, Ohio, USA; Mac Jones (Alabama) with NFL commissioner Roger Goodell after being selected by the New England Patriots as the number 15 overall pick in the first round of the 2021 NFL Draft at First Energy Stadium. Mandatory Credit: Kirby Lee-USA TODAY Sports

Former Alabama quarterback Mac Jones as all up in his feels Thursday evening after the New England Patriots made him the 15th pick in the 2021 NFL Draft.

Considered by some to be a target of the San Francisco 49ers at three, Jones fell down the draft board. At the end of the day, he was the fifth quarterback off the board.

With that said, Mac Jones could not have asked to land in a better situation. He’ll now learn from offensive guru in Josh McDaniels and all-time great head coach Bill Belichick. Jones will also be able to sit behind Cam Newton for one season before he takes over as the face of the franchise — taking over the departed Tom Brady in the process.

Interestingly enough, a tweet Jones sent back in 2019 has now gone viral. Then a backup for Alabama, he posted a photo comparing his skinny frame to one Tom Brady right before the GOAT was drafted by these very same Patriots back in 2000.

That’s all sorts of great stuff right there. People also had some pretty amazing reactions to this tweet more than two years after the fact.

What a fun ride this is going to be for Mac Jones and the Patriots.