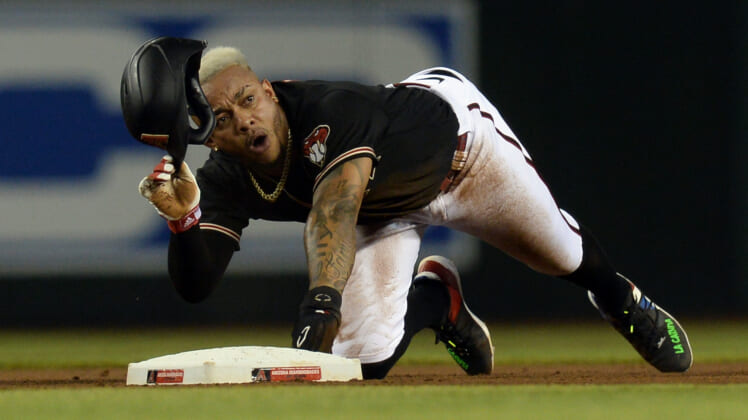 When an MLB team is 23-60, there likely isn’t a player on their roster that they would deny trade inquiries for. That could include Ketel Marte of the Arizona Diamondbacks.

Albeit he has been on the injured list multiple times, Marte has looked like his 2019 self (he posted a .329 batting average and 32 home runs) at the plate this season. He sports a .370 batting average and a .974 OPS on the season and of course has extensive experience playing second base, shortstop and center field.

Whether they actually intend on trading Marte before the MLB trade deadline is a gray area. But everything has a price, right? We’re talking about a legitimate star player who’s 27 and playing at a high level. Under team control through 2024, the D-Backs could surely get back a haul via trade from contending teams for Marte.

Here are three teams that make sense for a Ketel Marte trade.

The Yankees are in a state of flux and have no choice but to make win-now moves in an attempt to climb up the American League ladder. Acquiring Ketel Marte would be a boldly impactful move that could potentially give New York its new best position player.

Marte has mostly played center field of late, and that works perfectly for the Yankees. Aaron Hicks is out for the season with a wrist injury. Meanwhile, the likes of Brett Gardner, Clint Frazier and Miguel Andujar have either struggled at the plate or in the field. Manager Aaron Boone needs someone new in the grass.

Marte is a smooth fielder and a dynamic hitter. He gets on base via base hits often, has considerable power and when healthy has been one of the best players in MLB since 2019. He enhances the Yankees from all aspects of the game.

If the Yankees are intrigued by Marte’s infield resume, they could plug him at shortstop next year, put a healthy Hicks back in center and move on from Gleyber Torres if he continues to slump.

With all that being said, the Yankees may refrain from making a trade that requires moving on from top-tier prospects before the MLB trade deadline — instead opting for more short-term, low-cost moves.

The White Sox’ outfield has been mired with injuries, as Eloy Jimenez, Luis Robert and Adam Engel have all endured injuries at some point this year. Plus, infielder Nick Madrigal is out for the season, and Yermin Mercedes was recently sent to Triple A. Ketel Marte aids the White Sox in both regards.

Offensively, Marte would make an elite White Sox’ offense formidable. A combination of Marte, Jose Abreu, Tim Anderson and Yoan Moncada would be something else. For a team in the thick of American League pennant contention and in first place in the AL Central, Marte poses a way for them to strengthen their roster and potentially run away with their division.

One way or another, Marte fills a defensive void for the White Sox. He can be the team’s new starting center fielder, giving manager Tony La Russa a deep outfield rotation at full force. On the other hand, he’d be an enormous upgrade for them at second base, as he would form a sturdy double-play duo with Tim Anderson. The pair of middle infielders, Abreu and Moncada would form arguably the best infield in MLB.

Contenders go for it, and that’s what the White Sox would be doing by trading for Marte. They’d be filling a void in emphatic fashion for a team that’s loaded across the board.

Why wouldn’t the White Sox make the trade? They may view themselves as having enough star power to the point where they merely have to make minor trades to win the World Series.

The St. Louis Cardinals have the talent to win but for some reason have been unable to put it together in recent memory. When you trade for perhaps the best first and third baseman in the game in Paul Goldschmidt and Nolan Arenado (when they made the trades, that is), you’re a win-now team that believes it can win the World Series. They might as well continue to entrench themselves in blockbuster trades, making a move for Ketel Marte.

Tyler O’Neill has basically been the only bright spot for the Cardinals this season. Their offense is monotonous, starting pitching is adequate and the bullpen is a guessing game.

Tommy Edman and Paul DeJong have struggled to get on base, opening the door for Marte to start at either middle infield position and move his predecessor into a utility role. As for the outfield, it has been a story of inconsistencies and injuries with Dylan Carlson, Harrison Bader and Justin Williams. Marte could take over in center field.

Marte adds variety to a lacking offensive attack. If Arenado and Goldschmidt pick up the slack by a hair and Marte continues to put the ball in play on a frequent basis, the Cardinals’ offense can at least be middle-of-the-pack. Some part of this team has to perform better, and the offensive pieces are capable of better performance, especially with the addition of a star in his prime.

If they’re going to right the ship and get in the NL pennant mix, the Cardinals need their veterans to wake up and the organization has to make a profound move. Ketel Marte fits the bill and would be an integral part of their future.