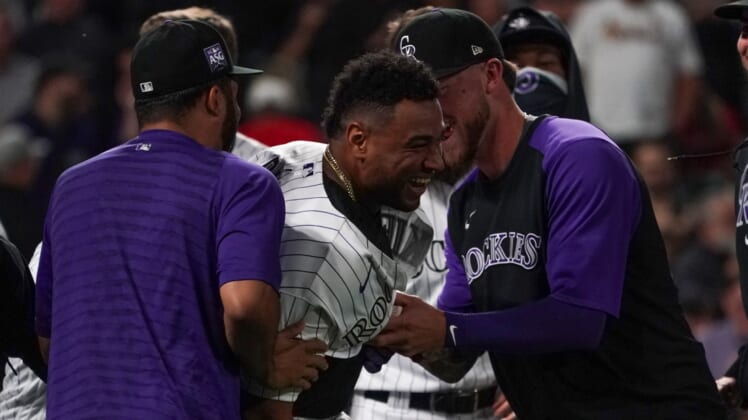 Elias Diaz hit a two-out, three-run homer in the bottom of the ninth as the host Colorado Rockies beat the St. Louis Cardinals 5-2 in Denver on Thursday night.

Diaz finished with three hits, and Brendan Rodgers also went deep among his two hits for the Rockies, who have won four straight.

Daniel Bard (4-4) pitched the ninth inning for the win.

Paul Goldschmidt homered and had two hits, and Tyler O’Neill and Paul DeJong had two hits each for St. Louis.

With two outs in the ninth, Rodgers and Ryan McMahon walked against Giovanny Gallegos (5-2). Diaz fell behind 0-2 before crushing a slider into the seats in left; his fifth homer of the season spoiled Nolan Arenado’s return to Coors Field.

Arenado, who was traded to the Cardinals in the offseason, played eight seasons with the Rockies. He went 0-for-4 Thursday.

St. Louis starter Adam Wainwright came into the game with a stellar 11-1 record against the Rockies, including a 4-0 mark at Coors Field. Colorado was able to get to him in the second inning.

It started with a walk to C.J. Cron. Rodgers followed with his fifth home run of the season, a shot to center field that gave the Rockies a 2-1 lead.

St. Louis had gone in front in the top of the inning when Tommy Edman reached on a one-out triple to right field and scored on a single by DeJong. The Cardinals had runners on second and third with two outs, but starter Antonio Senzatela got Dylan Carlson to ground out.

St. Louis tied it in the third when Goldschmidt led off with a homer, his 12th of the season and the 26th of his career against Colorado.

Senzatela retired eight straight and 10 of 11 from the third through sixth inning. He allowed two runs and seven hits in seven innings.

Wainwright was equally effective, retiring 12 of his last 13 and striking out four in eight strong innings.