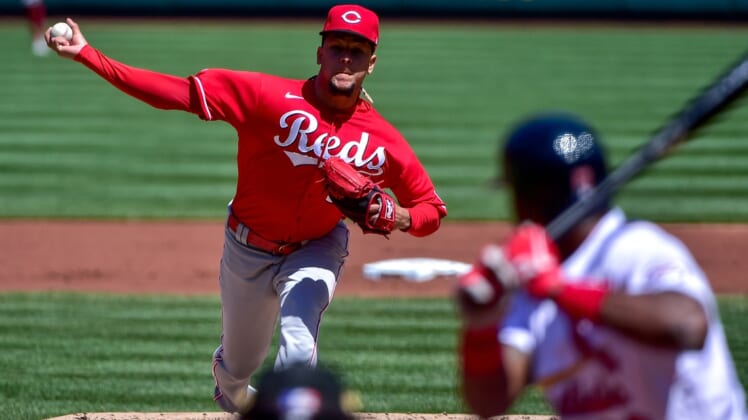 The Reds have lost seven consecutive games to fall three games under .500 and sink into the National League Central cellar.

Jack Flaherty (4-0) held the Reds to one run on three hits over seven innings. He struck out six batters and walked nobody.

Alex Reyes got in and out of ninth-inning trouble to earn his fifth save.

Reds manager David Bell was ejected in the sixth inning for arguing after Flaherty hit Jonathan India in the helmet with a pitch and the umpires issued warnings to both teams.

India stayed in the game to run, but the Reds lifted him after the half inning.

The Cardinals struck first. Tommy Edman led off the first inning with a single, then he raced to third on Dylan Carlson’s single and scored on Paul Goldschmidt’s groundout.

Andrew Knizner followed with a single, and Flaherty bunted him over. Carlson’s RBI single put the Cardinals up 4-0.

The Reds finally got on the board in the seventh inning when Jesse Winker, who has a 10-game hitting streak, smacked a lead-off homer.

They cut their deficit to 4-2 in the eighth inning. With one out, Kyle Farmer hit a potential double-play grounder, but he reached second base on Edman’s throwing error.

The Cardinals responded in their half of the inning when Carlson hit a double and scored on Goldschmidt’s single to make it 5-2.

The Reds got the potential tying run on base in the ninth. Nick Castellanos hit a ground-run double with one out and Joey Votto walked. After Eugenio Suarez flew out, Reyes walked Nick Senzel to load the bases.

But Tucker Barnhart grounded out on a 3-1 pitch to end the game.