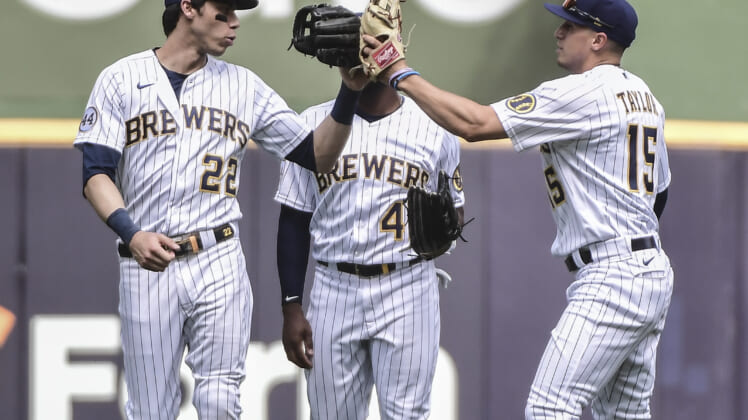 The Milwaukee Brewers are rolling. Winners of 10 of their last 11 contests, the Brew Crew has taken a six-game lead in the National League Central at 48-33. They’re firing on all cylinders and playing their best baseball of the season.

The National League has captivated the interest of baseball fans alike with the San Francisco Giants sporting a 50-29 record while the Los Angeles Dodgers and San Diego Padres sport formidable rosters.

Such competition in the NL West has taken the attention off basically every other team in the NL. Attention doesn’t always lead to results, though, as the Brewers are squarely in the NL mix with the aforementioned powerhouses.

Here are three reasons why the Milwaukee Brewers are a legitimate NL pennant contender.

Manager Craig Counsell’s tenure with the Brewers has habitually featured a starting rotation that has left much to be desired. The 2021 season has squashed that narrative.

One could argue that the Brewers have the best starting rotation in MLB at the moment. Brandon Woodruff, Freddy Peralta and Corbin Burnes have been electric on the hill. The trio of right-handers are logging strikeouts at a high rate, pitching deep into games, keeping runners off base and doing so efficiently. Burnes’ 2.53 ERA is the worst of the three starters. That’s absurd. 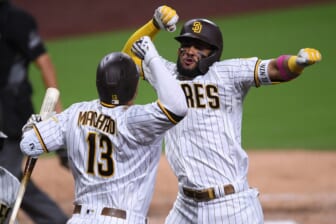 All the while, Adrian Houser and Eric Lauer have held their own and Brett Anderson is capable of being a sturdy force every fifth day. This group is a reliable and mostly homegrown unit that’s proving to be a power-pitching bunch.

Milwaukee’s identity has been Christian Yelich and their bullpen. Now it’s their starting rotation. It’s keeping their offense in games, lessening the strain on their bullpen and serving as the impetus for the team’s success.

Any time a team’s backbone is starting pitching, their play is sustainable. It makes up for a lacking part of a team’s roster, especially when its starters provide length.

Starting pitching has been the primary catalyst for the Milwaukee Brewers’ play this season. The beneficiary of that play? That would be the Brewers’ multi-faceted bullpen.

Josh Hader has been lights-out. The hard-throwing southpaw is blowing his fastball past hitters and sports a ridiculous 0.55 ERA. While he hasn’t been as superb as he was in 2020, Devin Williams has pitched better of late. Brad Boxberger, Brent Suter and midseason pickups Trevor Richards and Hunter Strickland have been plausible in the late innings.

A handful of these relievers are adept at pitching beyond one inning and/or have flexible roles out of the bullpen. In the past, they were somewhat overworked due to the starters providing minimal length. Albeit that problem hasn’t exactly disintegrated this season, the continued dominance of their rotation makes it feasible to expect the workload on their bullpen to lessen as the regular season heats up.

All the Brewers have ever had to do is complement their high-octane bullpen with a reliable rotation to win. Instead, they have an elite rotation of arms who have come into their own, and it makes their bullpen that much more dangerous.

The bullpen isn’t being asked to get 12-15 outs anymore. Everyone is fresh and performing better as the season progresses.

From a pure statistical standpoint, the Brewers have an underwhelming offensive attack. On the other hand, those in their order who have underwhelmed are players who have been a hassle in the batter’s box for the bulk of their respective careers.

A healthy Christian Yelich isn’t a .247 hitter; he’s a slugging machine. While he has never been known for his ability to get on base, Jackie Bradley Jr. isn’t a .165 hitter. Keston Hiura has showcased an ability to hit at a high level in the past.

If and when these individuals get back on track, they’ll accompany those in the Brewers’ offense who are swinging the stick well such as Omar Narvaez, Kolten Wong and Willy Adames. Those struggling and thriving all have something crucial in common: they have considerable playoff experience under their belt either with the Brewers or another MLB team.

Let’s get hypothetical, shall we? If the Brewers’ offense merely produces a little better than it has over the first half of the regular season, this team is a World Series contender. Great starting pitching, a great bullpen corp and a respectable, veteran offense with upside is a combination no one wants to face in the playoffs.

This team has come up short in the playoffs in each of the last three seasons, not to mention their 2017 second-half collapse. The 2021 season has been the best all-around brand of baseball that the Milwaukee Brewers have put together in recent memory. They have the pieces to win it all.