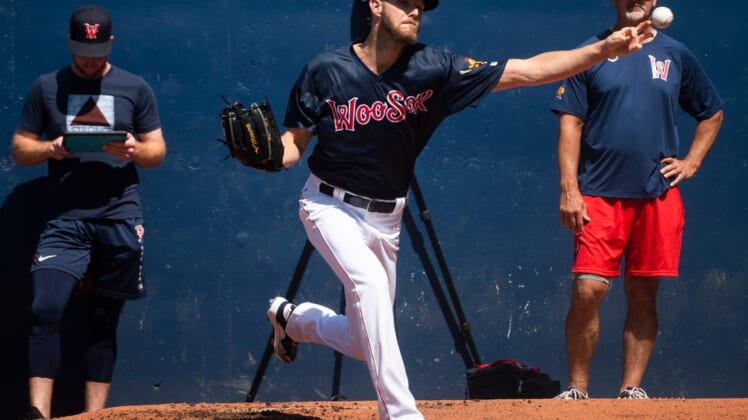 Boston Red Sox manager Alex Cora is eager to welcome back left-handed ace Chris Sale, whenever that should happen.

On Wednesday, it felt as if a return may be closer than previously expected.

Sale, recovering from Tommy John surgery performed in March 2020, threw from the main mound at Fenway Park with a fastball that consistently touched 94-95 mph. Sale complemented his velocity with a collection of sliders and changeups.

Cora explained his optimism in a media session before Boston’s home game against the Kansas City Royals.

“Just the command of the pitches,” Cora said. “That’s something that I didn’t expect. And he was able to throw fastballs inside, fastballs arm side, up and away, put people away. The changeup was good and the slider was good.

“That’s something that, throughout the process, I do believe that that’s the last thing you get. The changeup and command. And for him to be dotting pitches already, it’s a great sign.”

Should all continue trending toward a return, Sale, 32, could be back in the rotation by August.

Cora referenced the likelihood that Sale would be sent on a rehab stint.

“It’s not guaranteed, yet, obviously,” Cora said, “but it’s trending that way. You know, we’ll see how he feels tomorrow. I always said that the most important thing about this whole process is the next day or the days in between live BPs or bullpens and all that.

“I saw him walking by, I talked to him out there, and he feels good about where he’s at, how he went about it, so we’ll see what this brings.”