WATCH: Milwaukee Brewers hold off Chicago Cubs for 7th win in a row 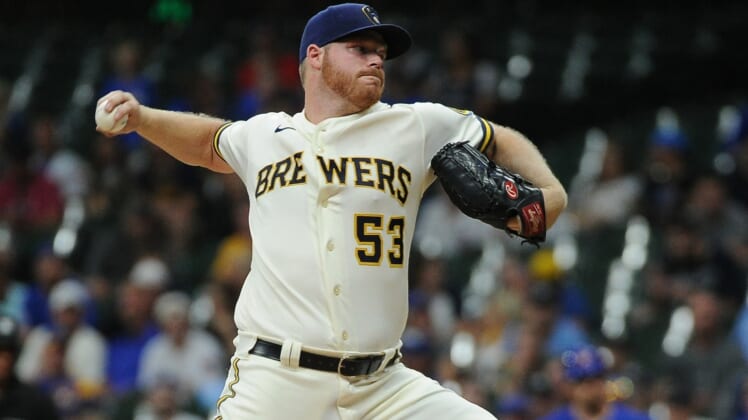 Brandon Woodruff struck out eight batters over six strong innings, and the Milwaukee Brewers held on for a 2-1 win over the visiting Chicago Cubs on Tuesday night for their seventh victory in a row.

Christian Yelich and Jace Peterson drove in one run apiece for Milwaukee, which will go for a three-game sweep over the Cubs on Wednesday afternoon. The Brewers have outscored opponents 44-15 during their winning streak.

Patrick Wisdom went 1-for-3 with a double and an RBI to lead the Cubs at the plate. Chicago has dropped five consecutive games.

Woodruff (7-3) limited the Cubs to one run on four hits before giving way to the bullpen in the seventh. The right-hander walked three batters and threw 66 of 104 pitches for strikes.

Cubs right-hander Zach Davies (5-5) gave up two runs on two hits in four innings against Milwaukee, where he played from 2015-19. He walked three and struck out six.

Brewers closer Josh Hader pitched a scoreless ninth inning for his 20th save in as many opportunities. He retired pinch hitter Jose Lobaton to end the game and lowered his ERA to 0.55.

Milwaukee opened the scoring in the bottom of the first. Willy Adames drew a walk, stole second base and scored on a one-out double by Yelich to right-center field.

The Cubs evened the score at 1-1 in the top of the fourth. Javier Baez hit a leadoff triple to right field and scored two batters later on Wisdom’s double to center field.

In the bottom of the fourth, Milwaukee regained a 2-1 lead. Peterson ripped a single to right field, and Yelich scored from second base as the ball bounced off Cubs right fielder Jason Heyward.

The Cubs loaded the bases with two outs during the seventh, but Brewers right-hander Jake Cousins escaped trouble when he struck out Ian Happ on a slider to end the inning.

Cubs first baseman Anthony Rizzo missed his second straight game because of back pain. His teammate, Kris Bryant, was not in the lineup because he is dealing with soreness in his side.