The Urban Meyer situation damaged the already-poor reputation of the Jacksonville Jaguars. But things weren’t supposed to go this way after drafting Trevor Lawrence, the top quarterback prospect since Andrew Luck. It should have been maybe one more year of turmoil, with mixed glimpses of hope swimming through Duval, like we’ve seen from the Bengals and Chargers the past two seasons.

Instead? Another year dwelling at the bottom of the league, looking like an embarrassment. Some even are jumping the gun, questioning whether Lawrence is a bust after just 13 games into his pro career, which is asinine.

Now that Meyer has finally been shown the door, it’s all upward and onward from here. Here are four moves the Jacksonville Jaguars need to make to ensure Lawrence is successful, starting in 2022. 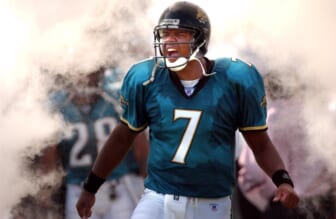 There are several candidates Jags team owner Shad Khan could hire to replace Meyer, and almost all of them would be an improvement. The most crucial part of getting the Jags right is ensuring Trevor Lawrence can flourish. For that reason, they should hire an offensive-minded head coach who can personally help him become the superstar, phenom quarterback they selected No. 1 overall.

Some of the top offensive minds who appear prepared for a head coaching role are Kansas City’s Eric Bieniemy, Dallas’ Kellen Moore, and Tampa Bay’s Byron Leftwich, who spent four seasons with the franchise from 2003-06.

Leftwich never experienced the same mild success as he did with the Jags until he got into coaching, where he’s ascending as fast as any coach in the industry. While he’s not the biggest reason for their success, Leftwich often draws high praise from Bruce Arians, Tom Brady, and several others within the Tampa Bay Buccaneers organization.

Hiring Leftwich may be seen as a safe hire, going back to their history with one another, but it could also be the right decision.

One big question: How will Leftwich continue developing Lawrence? Brady came to Tampa as a finished product, what has Leftwich done to make his QB better? Would another candidate such as Kellen Moore, Josh McDaniels, or Jim Caldwell be better for Lawrence? These are the questions Leftwich will undoubtedly face during his eventual head coaching interview.

The Jaguars are currently slated to have the second overall pick in the 2022 NFL Draft. As usual, there are a lot of prospects packed with potential, but there is only one Kyle Hamilton. Standing at 6-foot-4, the Notre Dame safety is a human chess piece for any defense.

Hamilton is superb in coverage where his speed makes him a rangy defender. Yet his instincts help him make an impact when stopping the run. He’s also a great tackler. Hamilton is the total package, not to mention his freakish size and athleticism. Also born in Greece, it’s too bad the “Greek Freak” moniker is already taken because Hamilton just might fit the bill.

One could make a case for the Jaguars to go with a pass rusher such as Aidan Hutchinson or Kayvon Thibodeaux here as well since the Jags are tied for the fifth-fewest sacks this season, but they’ve already invested first-round picks in Josh Allen and K’Lavon Chaisson there. The safeties in Duval are barren, and while those can be acquired in the offseason, Kyle Hamilton’s don’t grow on trees.

As it stands, the Jacksonville Jaguars project to have just over $70 million in cap space to spend this offseason. They should do everything in their power to build up their offensive line to protect their QB. Building from the trenches out will also open up running lanes for James Robinson and Travis Etienne, who missed his rookie season due to a Lisfranc injury to his left foot.

Another area they need to improve is at wide receiver. D.J. Chark was only able to play four games, which obviously didn’t help matters, but he’s set for free agency at the end of the season. Even with him in the stable, the Jaguars don’t have a No. 1 receiver for Lawrence to rely on when the situation calls for it.

Luckily, they don’t need an overhaul. A combination featuring two of Chark, Marvin Jones and Laviska Shenault can work, but they need another explosive option. And they need to find a starting tight end, bringing in Tim Tebow for some publicity won’t cut it.

So, how do the Jags acquire a No. 1 receiver, a starting tight end, and rebuild their offensive line in one fell swoop?

Since they have a swamp full of cap space, they can throw tons of money at the issues and hope to solve them.

Widely regarded as the top unrestricted free agent available, the Jaguars should back up the Brinks truck for wide receiver Davante Adams. The Packers are projected to be well over the cap and could struggle to retain one of the best wideouts in the game.

Left tackle Cam Robinson, while serviceable, hasn’t developed into the bookend left tackle that the Jags may have hoped for, as suggested by last season’s franchise tag. They can essentially swap him out for Saints left tackle and 2022 unrestricted free agent Terron Armstead.

Should the Jaguars decline to draft an elite pass-rusher, perhaps they can find one via the trade market. There are several who could be considered available, with the right offer.

The Packers have Za’Darius Smith and Preston Smith, two aging veterans on the wrong side of 30, plus an emerging Rashan Gary who’s their presumed top pass-rusher going forward. Depending on which direction the organization plans to go, whether an Aaron Rodgers parting happens, one of the Smith Bros. could likely be acquired.

Za’Darius is coming off a back injury that’s knocked him out of 12 games thus far, which likely saps his trade value. This could make the Packers less inclined to “sell low”. Preston in particular seems like the easier trade target. The Packers can save $12.5 million in cap savings by trading the seven-year veteran.

While Preston isn’t likely to lead the league in sacks any time soon, he’s more than capable of getting after the quarterback. Currently averaging just 1.8 sacks per game as a team, the Jaguars can afford to trade a mid-round selection for a proven pass-rusher. It also allows them to continue developing K’Lavon Chaisson instead of moving on from him altogether, with Smith acting as a stopgap in the best-case scenario.

If the Jacksonville Jaguars can make some of these moves, or anything similar, Trevor Lawrence will never experience another two-win season as he’s mired in right now ahead of Week 15.

The Jags can begin their playoff push, or at least compete for them as soon as next year. As Lawrence mentioned, the drama needs to stop in order for them to win, now that Urban Meyer can’t foil their plans, winning can finally become the organization’s top priority.