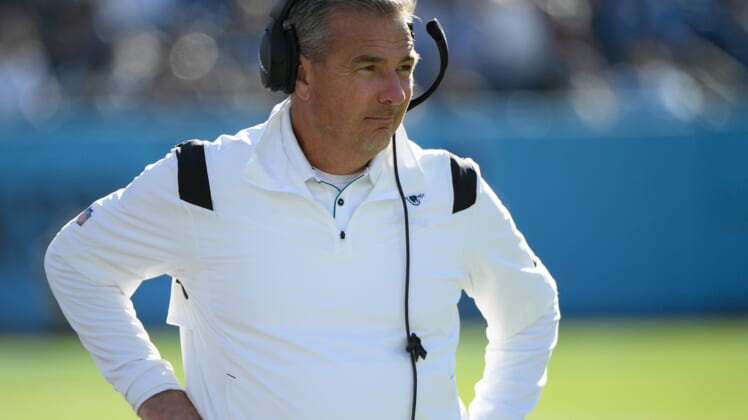 Hours after the latest allegation of misconduct was levied against Urban Meyer, the Jacksonville Jaguars ended the head coach’s brief, controversial and unsuccessful stint, firing him Wednesday night.

Earlier Wednesday, former Jaguars All-Pro kicker Josh Lambo alleged that Meyer kicked him in the leg while cursing him out during a preseason workout session. Meyer responded to the report by saying, “Josh’s characterization of me and this incident is completely inaccurate, and there are eyewitnesses to refute his account.”

Still, it was the latest black mark for Meyer, with reports surfacing in the past week that he got into a shouting match with wide receiver Marvin Jones after criticizing the receivers group and that he called members of his coaching staff “losers.”

This follows an incident in October when he was seen on videotape with a young woman, who wasn’t his wife, dancing close to him. A second video, released later, appeared to show him touching her bottom.

After a 20-0 loss to the Tennessee Titans dropped the Jaguars’ record to an AFC-worst 2-11 in Meyer’s first season on the job, the head coach denied calling his coaches losers, and he downplayed the incident with Jones. He said anyone who was leaking information would be fired.

Instead, it was Meyer who was fired.

Jaguars owner Shad Khan said in a statement Wednesday night, “After deliberation over many weeks and a thorough analysis of the entirety of Urban’s tenure with our team, I am bitterly disappointed to arrive at the conclusion that an immediate change is imperative for everyone. I informed Urban of the change this evening. As I stated in October, regaining our trust and respect was essential. Regrettably, it did not happen. …

“In the spirit of closure and recharging our players, staff and fan base, I will not comment further until some point following the conclusion of the NFL season.”

The Jaguars lost more games this year than Meyer dropped in seven seasons at Ohio State, where he was 83-9 from 2012-18.

Meyer, 57, won two national championship (2006, 2008) while in charge at Florida, and he added another national title with Ohio State in 2014. He owns a 187-32 record as a college head coach counting his time at Bowling Green, Utah, Florida and Ohio State, but he had never worked in the NFL before this year.

Bevell, 51, has been an offensive coordinator for the Minnesota Vikings, Seattle Seahawks and Detroit Lions before landing that position under Meyer in Jacksonville this year. He was the Lions’ interim coach for the last five games of the 2020 season, leading Detroit to a 1-4 record.