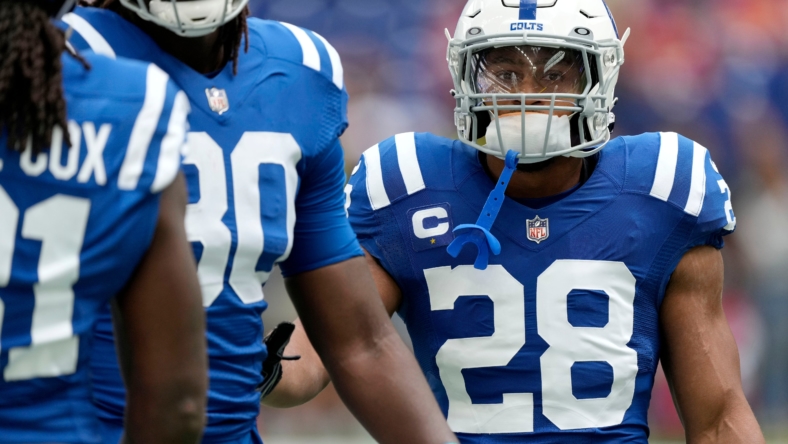 This week the Indianapolis Colts host Washington for a late afternoon game. Both of these teams have been connected in the news a few times this year. First, the Colts traded their starting quarterback to Washington because Jim Irsay was done with Carson Wentz. Then recently, at the owner’s meetings, Irsay publicly stated the owners have enough evidence to force Washington’s owner Dan Snyder out.

So, most likely, the only fans watching this game will be those of these two teams. That is unless the owners get into it between now and when the game is over. For now, let’s look at the three important matchups for the Colts to win.

Jonathan Taylor gets a chance to feast

The Colts made the phrase “run the damn ball” famous. Then that’s exactly what they did frequently. This season, however, they have not been running the ball. Jonathan Taylor has only cleared 100 rushing yards once this season, and that came back in Week 1.

Now the team will be starting a brand new quarterback, one who will be making his NFL debut. Considering the team has been asking grandpa Ryan to throw the ball 40+ times in the last couple of games. It would be smart for the Colts to run the ball more often.

This would also take some pressure off of Sam Ehlinger. Also, if the running game is cranking out big gains, it will make the play-action game that much more effective. Washington is 16th in the NFL with their rush defense. Giving up 4.5 yards per carry and an average of 118.3 yards per game. This shapes up for a get-back-on-track game for Taylor.

Defense doing what it’s been doing

The strength of this Colts team has been their defense. Yes, the defense is what the team is leaning on, not the offense like the Peyton Manning or Andrew Luck era. This defense has been ok. Unfortunately, they are asked to play too much of the game and therefore get worn down and can’t make the subsequent stops.

This unit also isn’t creating as many turnovers as they did last season, either. That could have more to do with the fact the team is behind multiple scores in every game. Regardless, this defense needs to do what it’s been doing. Not giving up big plays and limiting the run.

Washington’s offense is no juggernaut and isn’t on the same rushing level as Tennessee’s. The Colts should be able to handle this opponent. Possibly even force some turnovers.

Sam Ehlinger will be making his first NFL start on Sunday. The range of outcomes is all over the place. The guy showed in college that he’s tough and a gamer. But will that translate to the NFL and be sustainable? He’s improved his throwing mechanics and subsequently improved his game this past offseason.

There are two big things that Ehlinger needs to do this week to help his team win above all else. The first thing is not turning the ball over. The Colts have only done this once this season, and it resulted in their highest-scoring output of the season. The second is making smart plays. It’s ok to throw the football away if there is nothing there. Or he can use his legs to gain some positive yardage.

Michael Pittman, Alec Pierce, and Parris Campbell can all make plays. Ehlinger just needs to get the ball in their hands and let them do the work. The same goes for Taylor and Nhyheim Hines. Ehlinger doesn’t need to come out and throw the ball 40+ times. He just needs to keep the offense on time, stay out of long yardage plays, and get the ball to his playmakers.

This week’s game might be the ugliest on the slate of NFL games. Which could go well with how the Colts play football. This game is a toss-up as to who will win. And in those cases, either the team with the better quarterback wins or the team whose quarterback plays better wins.

Related: 5 Indianapolis Colts that should be moved before Nov. 1 trade deadline