How To Watch the Denver Broncos Games Live This Season (2022) 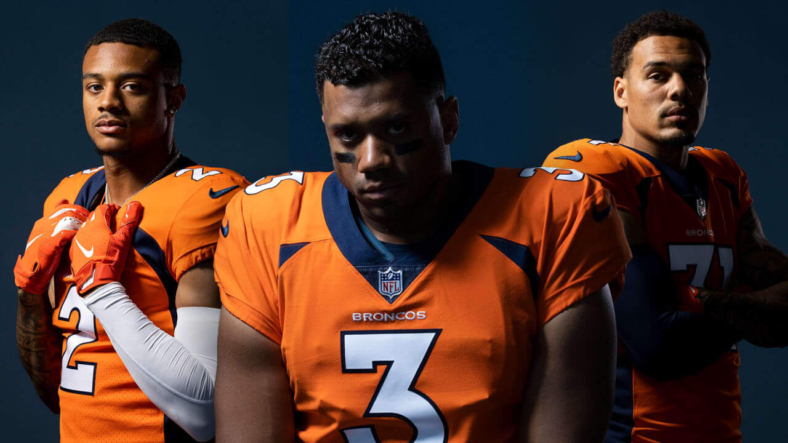 After what could have been the most exciting pick-up in the NFL this off-season, Russell Wilson and the Denver Broncos look to get back to the Peyton Manning era of play in Denver. With high-caliber wideouts Jerry Jeudy and Courtland Sutton accompanied by Melvin Gordon III in the backfield, this offense will be something to keep an eye on this 2022 NFL season. Broncos country, are you ready to ride?

As livestreaming services have taken over, now is the time to make the switch. Don’t wait until the season is in its peak to make the switch from cable to streaming service. Most Broncos games will be broadcasted on CBS, NBC, ESPN, Fox and the NFL Network this season. If you find yourself asking how you’re going to watch the Denver Broncos this season, look no further. Continue reading to see all your options for live streaming so you won’t miss a single touchdown from the mile high city.

Where can you stream almost all of the Denver Broncos games?

Live streaming the Denver Broncos with Hulu + Live TV is a great option to keep up with all the action. Offering two plans that include 75+ live channels, unlimited DVR, and an option for ad-free on-demand streaming, this streaming service could be your new home for all things entertainment. Along with Hulu, you will gain exclusive access to Disney Plus and ESPN Plus making this package one of the best for viewers.

With no free trial offered for its live TV packages, Hulu makes up for it with extensive channel selection, multiple streaming networks, and more. Find out for yourself this NFL season and watch all of the Denver Broncos games live with Hulu + Live TV.

With DIRECTV STREAM, you get a streaming service you can count on no matter where you go or how many people you have watching at the same time. Offering customers four plans to choose from and a channel listing that covers everyone’s needs, DIRECTV STREAM allows its users 20 simultaneous streams so when you’re watching the game there’s no need to worry about being booted off when someone in the family turns on something else down the hall.

FuboTV is a streaming service that is looking out for its sports fans. Starting at $69.99, FuboTV offers four packages that encompass livestreaming as a whole. For the ultimate sports fan, we suggest taking a look at the Ultimate plan that comes with FuboTV’s Sports Plus package. You’ll have access to different college networks, other sports related content, and so much more. If the Ultimate package doesn’t seem like the right fit but you still want the Sports Plus package, you can add it onto the other packages for an additional cost.

Offering new users the opportunity to test out the streaming service prior to committing is a big part of what makes FuboTV so great. The service provides a seven-day free trial so you can get a full week of the NFL season and make sure that this is the right service for you. But Broncos fans, we can tell you that you won’t be disappointed.

Sling TV offers live TV streaming at a very affordable cost. With three packages starting at just $35 a month, sports fans will want to check out either the Blue plan or the Sling Orange & Blue plan to make sure that they’re catching all of the sports action.

Sling TV is offering its new customers an awesome deal right now. With $10 off your first month, you can bring your total to $25 for livestreaming. With everything you’ll be gaining plus the ability to watch the Denver Broncos this season, you’d think Sling TV just threw you the game-winning touchdown.

YouTube TV takes all the hassle out of choosing a plan from your live TV streaming service. They keep it simple and provide you with one main option that has it all. Starting at $65 a month, 85+ live channels, and YouTube originals, this streaming service has got you covered. New users will also get $50 off their first month when they sign up, so grab your saddle and sign up for YouTube TV today. Broncos country, let’s ride!