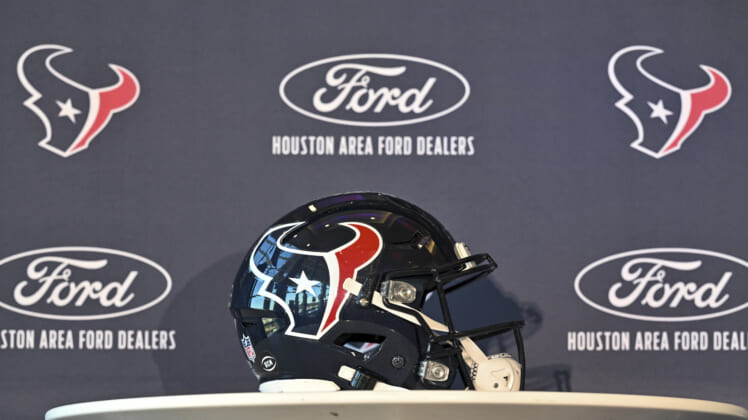 The Houston Texans trade of franchise quarterback Deshaun Watson sets the team up well in each of the next three NFL Drafts.

That includes the annual event in Las Vegas later this week. Houston now boasts an additional first-round pick. It’s in this that general manager Nick Caserio has a ton of flexibility. That includes potentially trade down from the No. 3 pick while adding future draft capital.

Coming off a four-win team and in the early stages of a rebuild, this week is going to be huge for the team. Below, we look at three ideal Houston Texans trade scenarios during the 2022 NFL Draft.

Houston Texans trade down from the No. 3 pick

The Texans are apparently sold on 2021 third-round pick Davis Mills under center. It’s why the team has pushed back against acquiring a veteran quarterback such as Jimmy Garoppolo from the San Francisco 49ers.

This also means that Houston isn’t going to spend its original first-round pick (No. 3 overall) on a quarterback. It also means that the Texans could look to trade down with a quarterback-needy team. Let’s say the Detroit Lions pass up on Malik Willis as No. 2. If so, a team like the Carolina Panthers (sixth), Atlanta Falcons (eighth) and Seattle Seahawks (ninth) could look to move up for the Liberty product. This would net the Texans both early-round draft capital in 2022 and another early-round selection next year.

Houston Texans trade back into the first round

Flush with the 37th pick in the second round, Houston could very well look to move back into the end of the first round. It’s a team-building philosophy multiple organizations have utilized in the past. The idea would be to acquire a player that would then have a fifth-year team option on his rookie contract.

Houston has needs up and down the roster. It can target a specific player that perhaps falls a bit further down the board than we might imagine right now. In the process, it wouldn’t necessarily be paying a huge price to move up just a few spots.

On one hand, having a franchise left tackle to protect Mills should be seen as a great thing for Houston. On the other hand, the Texans could acquire a huge bounty for the expensive Pro Bowler. At the very least, there’s been some suggestions that this could be in the cards despite Houston pushing back against the idea publicly.

The idea here would be to acquire future draft capital as a way to expedite the rebuild. Teams such as the New England Patriots, Pittsburgh Steelers, New Orleans Saints and Philadelphia Eagles could use upgrades at left tackle. New Orleans and Philadelphia both also boast multiple first-round picks.

Could the Texans potentially add another first-round selection and more capital in pulling off a Tunsil trade? We wouldn’t put it past this organization heading into the 2022 NFL Draft in just a matter of days.