Although the full NFL schedule release will wait until Wednesday evening, Fox got a jump on things in the morning by revealing its full Week 1 lineup.

There are several epic showdowns on tap in Fox’s slate, which features four contests kicking off at 1 p.m. and two games in the late-afternoon window. 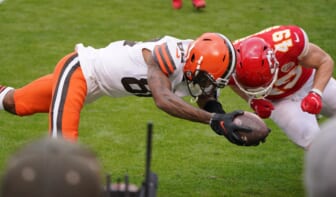 Most prominent among the early games is a clash between the Seattle Seahawks and Indianapolis Colts.

After Carson Wentz forced his way out of Philadelphia, he’ll have to live up to championship expectations in Indianapolis. His first assignment isn’t an easy one, but speaking of disgruntled quarterbacks, Russell Wilson made it known to the Seahawks he wasn’t pleased with the direction of the team this offseason.

One of these two potential Super Bowl contenders will be 0-1 after Week 1, which won’t set the best tone for either team dealing with uncertainty at the most important position on the field.

The Philadelphia Eagles traded up from 12th to 10th overall for the right to draft reigning Heisman Trophy winner DeVonta Smith. He’s expected to provide an immediate spark for Jalen Hurts and the Eagles’ passing attack.

Facing off against a porous Atlanta Falcons defense could result in a special Hurts-to-Smith connection, but the Philadelphia QB’s counterpart, Matt Ryan, has a new special weapon of his own in No. 4 overall pick Kyle Pitts.

Although he’s listed as a tight end, Pitts is more like a freakish receiver at the position. The Florida product can split out wide and beat cornerbacks, or devastate anyone who tries to cover him when he lines up along the line of scrimmage.

Ryan distributing the ball to Pitts, Julio Jones and Calvin Ridley is going to be tough for any defense to guard against. This should be a high-scoring affair, which makes it a great pick to be on Week 1 of the NFL schedule.

Packers-Saints face off in watershed moment for NFC contenders

This will mark the first time in a very long time that the New Orleans Saints haven’t taken the gridiron with Drew Brees leading the way under center. It’ll now be either Jameis Winston or Taysom Hill, which means the Saints could well take a big step back in 2021.

Starting off at home is nice, but facing the Green Bay Packers, who’ve been to the NFC Championship Game twice in a row, isn’t the easiest draw.

However, reigning league MVP Aaron Rodgers is upset with his situation in Green Bay. He may not be on the Packers’ Week 1 roster. In fact, current Denver QB Drew Lock is actually favored to take the Cheeseheads’ first snap in Week 1.

If the Rodgers saga results in a trade, then we could see the debut of his presumed successor Jordan Love against an exotic Saints defense in the Superdome. Not a great environment for an NFL debut. 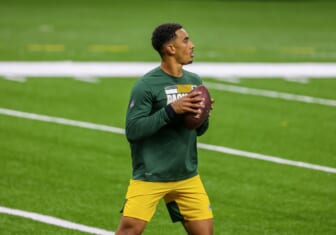