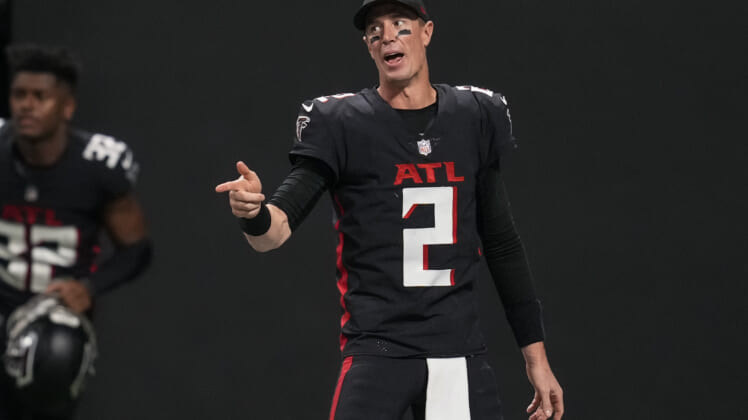 The Atlanta Falcons lost out on a deal for Deshaun Watson and with the franchise seemingly open to a new future at quarterback, Matt Ryan is the subject of NFL trade rumors.

When the offseason began, it seemed likely that Atlanta would keep its franchise quarterback around. It became inevitable after the sides reportedly agreed to a restructured contract, reducing his cap hit for the 2022 season. However, everything changed when Watson expressed interest in the Falcons.

Atlanta tabled its restructured contract with Ryan and turned its attention towards Watson. After seemingly being a finalist, the three-time Pro Bowl selection suddenly decided to play for the Cleveland Browns.

It seems a few days of thinking about a future without Ryan had an impact on Atlanta.

According to Ian Rapoport of NFL Network, the Falcons have fielded trade calls for Ryan and are receptive to the possibility of moving him Monday. If a deal isn’t reached, he’ll likely receive a new deal to mend fences after the Watson pursuit.

Let’s take a quick look at the best fits for Matt Ryan if he’s traded.

The Indianapolis Colts missed out on the MVP-caliber quarterbacks once again this offseason. Fortunately, the sudden availability of Ryan could save them. While he’s no longer an elite quarterback, Ryan played with one of the worst supporting casts in the NFL last season. A trade to Indianapolis could change the fortunes of both the organization and its new quarterback.

Playing behind a healthy Colts’ offensive line, Ryan would have more time to throw in a clean pocket than he did in Atlanta. Furthermore, one of the best rushing attacks in football would set up the play-action and allow him to serve as a high-end facilitator in the offense. Given the Tennessee Titans seem destined for regression, Ryan would likely make Indianapolis the favorite to win the AFC South.

Trading for Matt Ryan doesn’t mean the San Francisco 49ers aren’t sold on Trey Lance. We saw this team nearly win the NFC Championship Game with an injured Jimmy Garoppolo, it has the talent and coaching to win a Super Bowl. This would also reunite Kyle Shanahan with the quarterback he had the most success with at any stop of his coaching career.

Naturally, a trade would be complicated. Both sides might need to orchestrate a three-team trade with Ryan headed to San Francisco and Garoppolo moved to a team like the Carolina Panthers. All three teams would need to navigate the salary cap, but all parties would come away from a deal with what they need. If Ryan is under center for the 49ers in 2022, they can win the NFC.

The Seattle Seahawks made a run at Watson, but he wasn’t interested. It’s a sign that despite the public support for Drew Lock, the organization knows it can do a lot better at quarterback. There’s plenty of cap space to absorb Ryan’s deal and providing Pete Carroll with a reliable signal-caller would certainly interest the 70-year-old coach.

Ryan certainly wouldn’t make the Seahawks a legitimate playoff threat, there are too many holes on the roster. However, a level of stability at quarterback means maintaining trade value for Tyler Lockett and DK Metcalf with consistent production. Putting a few more wins on the board and being more competitive also gets fans in the seats, which the Seahawks need amid their mini rebuild. If the cost is right, the Seahawks will explore.