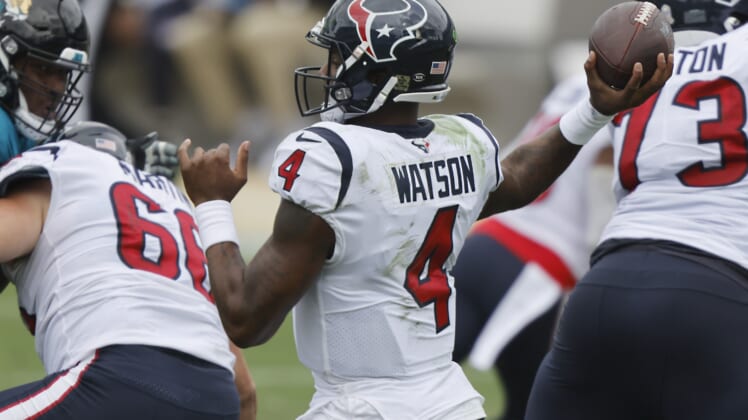 When Deshaun Watson requested a trade, the Carolina Panthers immediately got involved with the hope of landing a new face for the franchise. Everything changed in March when the first of 22 sexual assault allegations emerged against the Pro Bowl quarterback.

As more women came forward to accuse Watson of sexual assault, the Panthers turned their attention elsewhere. Before long, desperate to upgrade over Teddy Bridgewater, Carolina pulled off the Sam Darnold trade.

The Panthers immediately exercised his fifth-year option, fully guaranteeing his salary for the 2021 and ’22 seasons. He is expected to be the starter when Carolina’s season opens, but it seems the door isn’t closed on a deal for Watson.

NBC Sports’ Peter King wrote in his weekly column that he still believes the Panthers could put themselves in the running for Watson. It would take his legal issues being figured out, a process that could take months, but Darnold isn’t viewed as the kind of player who would stop a pursuit of Houston’s Pro Bowl quarterback.

Before allegations emerged against Watson, team owner David Tepper badly wanted the superstar passer. While the Texans never engaged in discussions, the Panthers increased their efforts to convince Houston on a blockbuster trade. Carolina was reportedly willing to essentially write a blank check to make something happen, but the Texans never budged.

A few months later, both teams find themselves in very different positions.

Even before the legal matters, there was a possibility Watson sat out the 2021 NFL season. He threatened to skip training camp and regular-season games in order to force a trade and the Texans were prepared to allow it. At the time, Houston was confident it could resolve the issues and believed it had no reason to move him for draft picks.

Barring all 22 suits against Watson being dropped, along with the NFL inquiry and Houston Police Department’s criminal investigation finding insufficient evidence, Watson will likely face discipline. There is a growing belief he will either be suspended or placed on the Commissioner’s Exempt List, resulting in him missing games.

As a result, Watson’s trade value has taken an undeniable pit. A player who many viewed as having an outstanding reputation and as one of the NFL’s biggest stars, now has significant questions and has lost key sponsors.

For Houston, the potential of landing three future first-round picks and additional assets for Watson is now gone. While teams like the Panthers, Denver Broncos and Philadelphia Eagles still have some interest, the Texans’ leverage in negotiations is gone.

The Texans will need to let the legal process and investigations play out. In the meantime, Tyrod Taylor projects as the team’s starting quarterback in 2021. As for the Panthers, it would seemingly take a lot going right for Watson and the Texans significantly lowering their asking price for a deal to go down.