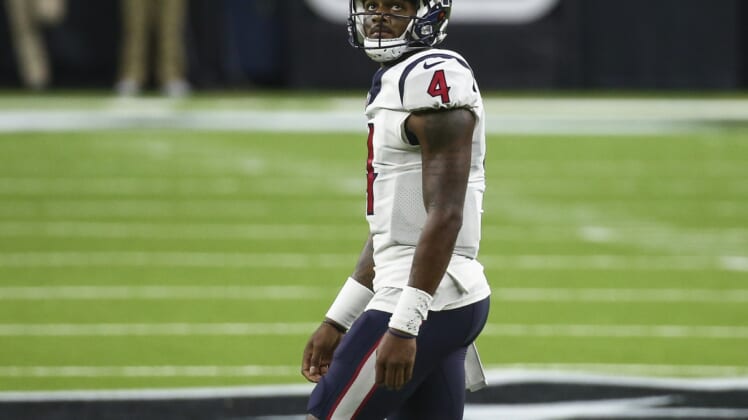 It was just a couple months ago that a potential Deshaun Watson trade was the talk of the NFL watercooler. That changed on a dime back on March 17 when an then unknown woman came out via her attorney to claim sexual assault on the part of the Houston Texans’ quarterback.

Initially, we had no idea what to make of these allegations. There were no criminal investigation pending from the Houston Police Department.

Things have changed big time since. North of 20 women have now come forward with civil suits claiming sexual misconduct and/or sexual assault on the part of the quarterback. The Houston Police Department also opened a criminal investigation on April 3.

In the mean time, talk of Deshaun Watson being traded have died down. Teams that had previous interest in the 2020 NFL passing leader have moved on to other options. Now, according to ESPN’s Jeremy Fowler, things have cratered in this regard.

“As far as his trade talk, that has cratered right now. From people I’ve talked to around the league, it’s just too heavy of a story to try and trade for Watson right now,” Fowler noted (h/t Bleacher Report).

What does this all mean? Well, there’s a bunch of different layers to it. We have the serious allegations levied against Watson, which impact multiple individuals outside of the football world. We also have Watson’s future in the NFL. That now seems to be up in the air.

Can any team justify trading for Deshaun Watson right now?

The short-form answer to this more complex question is a resounding no. NFL teams can’t assume guilt on the part of Watson. That much is known. But with his legal situation up in the air and given the severity of these allegations, making a move for the Pro Bowl signal caller just wouldn’t be prudent.

We have to look at this through the lens of society in general, not just a game being played by professional athletes. What type of public relations hit would an organization be taking on if it made a move for Watson right now? From a football standpoint, giving up anything for a quarterback whose career is up in the air also makes no sense.

Despite this, it appears that the Philadelphia Eagles are one of the teams keeping a close eye on the Watson legal situation. Should something dramatic happen in the quarterback’s favor, things would change. Until then, it’s a whole bunch of unknowns.

Will the NFL take action against Deshaun Watson?

This is another major backdrop as the Watson situation plays out off the field. In the past, we’ve seen players like Dallas Cowboys running back Ezekiel Elliott suspended for off-field issues despite criminal charges not being filed.

We’re too early in the process to comprehend what the Houston Police Department’s criminal investigation into Watson will conclude. What we do know is that the NFL has made it clear that the league is investigating the allegations. In fact, the NFL doubled down on that last week.

The likeliest scenario here is that Watson is placed on the commissioner’s exempt list. As Fowler noted in his report, it’s something Roger Goodell and Co. have used in the past, pending an investigation from both the league and authorities in the region where the allegations surfaced. However, that likely wouldn’t come until closer to Week 1 in September.

For now, there’s no trade value for Deshaun Watson. That’s as clear as day.