The Houston Texans appear to be in a wait-and-see mode when it comes to star quarterback Deshaun Watson. It was earlier this offseason that the Pro Bowl quarterback requested a trade from the Texans. Almost immediately, accusations from north of 20 women claiming sexual assault and/or sexual misconduct became public record.

With Watson’s legal situation still firmly up in the air, the Texans are seemingly struggling to figure out what to do. General manager Nick Caserio addressed the elephant in the room in speaking to the media on Monday.

While he did not provide us with a ton of new information, it’s now clear that Houston will make a decision about what to do with Watson ahead of the start of training camp late next month.

“I don’t have any additional comments about anything. I think we’re respectful of what’s happening, respectful of the process and everybody that’s involved,” Caserio said, via John McClain of the Houston Chronicle. “The most important thing is for all of us, the coaches and players and myself included, is to focus on the things we can control. As we get more information, as we get closer to training camp, we’ll try to make the best decision for the Houston Texans, whatever that entails.”

There’s really not a lot the Texans can do as it relates to Deshaun Watson right now. He’s facing multiple civil cases stemming from the aforementioned allegations. If the cases are not settled or dropped, there’s a darn good chance that the situation will still be pending through the 2021 NFL season.

This is a major backdrop to the entire story. It seems highly unlikely that the NFL would let Watson take part in training camp this summer with the allegations still pending.

Rather, it’s more likely that the star quarterback will be placed on the Commissioner’s Exempt List. This enables Watson to still get paid while remaining away from the Texans’ facility. Depending on what happens with the cases, a suspension could also be in the cards. However, that’s ways down the road. 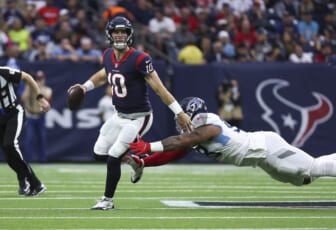 We’re now at that point where the NFL is going to have to make a decision on this matter. The Texans are set to open training camp in less than six weeks.

To say that Caserio have prepared for Watson potentially missing at least the start of the 2021 season would be an understatement. The embattled organization signed former Pro Bowler Tyrod Taylor during free agency this past spring.

Houston then used its first selection in the 2021 NFL Draft (third round) on former Stanford signal caller Davis Mills. The Texans have also added veteran journeyman Jeff Driskel to the mix.

Right now, Taylor has to be seen as the odds-on favorite to start Week 1 against Trevor Lawrence and the Jacksonville Jaguars should Watson be either suspended or placed on the aforementioned exempt list.

In terms of a potential trade, teams are still interested in the Pro Bowl quarterback. With that said, the legal situation would have to draw to a conclusion before any suitor actually pulls the trigger on a trade.

Watson, 25, is coming off a 2020 campaign in which he led the NFL in passing yards (4,823) while tallying 36 total touchdowns against seven interceptions for an otherwise hapless Texans squad.