Houston Texans quarterback Deshaun Watson won’t be deposed in the civil action against him until February 2022, ESPN reported Tuesday.

Citing Watson’s attorney, Rusty Hardin, the discovery phase of the lawsuits against him has begun and will continue well into the upcoming NFL season. Depositions begin in September and all 22 accusers will be deposed before Watson. He can’t be deposed before Feb. 22, per the report.

Hardin said Tuesday there are no settlement discussions taking place. Earlier this month, the attorney representing the 22 women, Tony Buzbee, said they won’t accept a financial settlement in exchange for dropping their sexual misconduct lawsuits against Watson. 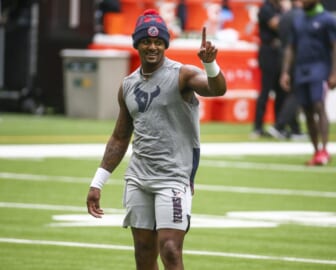 Watson and Hardin have denied allegations that anything inappropriate occurred during the massage sessions. In a news conference on April 9, Hardin acknowledged that Watson had “consensual encounters” with women on some occasions.

Watson is not attending OTAs with the Texans and had requested a trade before the allegations began to surface.