College football picks against the spread can be tricky when it’s Week 1, but there’s enough information out there to make smart bets as the 2021 season kicks off in earnest in the coming days. Four ranked teams are in action on Thursday, with a big slate planned for the weekend as well.

Here are our picks for all the top 25 games against the spread, followed by a breakdown of certain matchups to explain why they present particularly strong betting value. Game lines are courtesy of DraftKings.

Many of the spreads are so massive in Week 1, so why not have some fun and put a little coin on the best duel that’s going down?

Even though Clemson lost Trevor Lawrence, the Tigers return pretty much everyone else from a 2020 team that went to the College Football Playoff. Meanwhile, Georgia lost cornerbacks Eric Stokes and Tyson Campbell to the NFL, and the Bulldogs have to contend with star wide receiver Justyn Ross’ return after he missed last season with a spinal injury.

D.J. Uiagalelei proved last year when Lawrence was out with COVID-19 that he could step in and take the reins. He won against Boston College and pushed Notre Dame to two overtimes in South Bend, despite not having the aid of a viable rushing attack in that one. 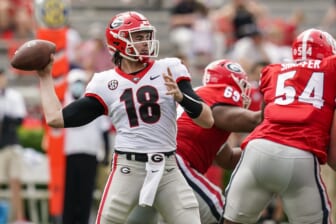 Given the losses to Georgia’s defense on the back end and Uiagalelei’s precocious poise shown as a true freshman, it’ll take a transcendent performance from Bulldogs signal-caller JT Daniels to pull this one out.

The last time Daniels was on a big stage, he fumbled twice, losing one, and threw an interception against Cincinnati in the Peach Bowl. Daniels rallied Georgia to a win, but he’s just a more limited player than Uiagalelei, and that should prove to be the difference.

Check out our 2021 Heisman Watch to see where D.J. Uiagalelei and JT Daniels are among the top contenders

The last game on Saturday’s slate also happens to be a huge no-brainer bet. If you’re going to place a wager on one game for Week 1, this is the one.

A football powerhouse UCLA is not. The Bruins are much more of a basketball school, and Chip Kelly’s presence as head coach hasn’t changed that. Their season-opening rout of Hawaii marked Kelly’s first non-conference win in what’s now his fourth season at the helm.

LSU is being slept on for its underwhelming 2020 campaign, which came on the heels of a national championship. They’re returning almost every starter from last year, got a boost on defense with Clemson transfer linebacker Mike Jones Jr., and Max Johnson has solidified their QB1 spot. 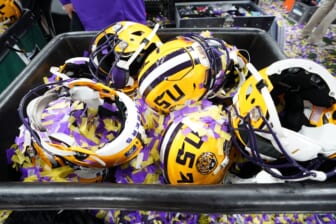 Derek Stingley Jr. and Eli Ricks are arguably the best cornerback tandem in the country. How in the world is UCLA going to throw on the Tigers, considering Dorian Thompson-Robinson managed to complete only 10 of 20 passes against the Rainbow Warriors?

That fact alone should be enough to persuade anyone to hammer LSU. Even if Kelly was doing his best to hide his scheme in a pseudo-exhibition precursor to this contest, the Tigers should just absolutely smash the Bruins. The rest of the nation’s elite programs will be put on notice after this one.

Our forecast for Notre Dame football isn’t exactly rosy, but this spread feels a little disrespectful to the Fighting Irish.

Yes, they’re on the road, are replacing Ian Book with Jack Coan at quarterback, and lots of offensive linemen to the NFL Draft. That said, Notre Dame should have a huge edge in overall talent level, not to mention the coaching matchup between Brian Kelly and Mike Norvell.

Coan is a transfer from Wisconsin, so he’ll have a chip on his shoulder to prove himself. His potential counterpart, McKenzie Milton, is an amazing story who suffered a career-threatening injury while starring at UCF. It kept him out of football for two full seasons. Milton even competing for a starting job at Florida State is borderline miraculous. 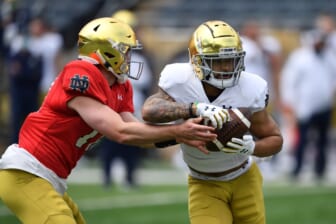 As much as college football fans will be rooting for Milton to succeed, he’s listed as a co-starter on the depth chart with Jordan Travis. Whichever QB is at the controls will be facing an excellent Irish defense, headlined by a probable first-round pick at safety in Kyle Hamilton.

Given their uncertainty at the most important position, the Seminoles hardly have the means to keep up with Notre Dame, even at home.