No. 16 LSU Tigers ready for first meeting with UCLA

UCLA’s season has gotten off to an impressive start.

No. 16 LSU already has had challenges getting ready for its opener against the host Bruins on Saturday.

UCLA rolled to a 44-10 home victory against Hawaii last Saturday as a tune-up for its first meeting against the Tigers, who evacuated to Houston over the weekend to avoid Hurricane Ida and prepare for their opener.

“This team is a special team,” Kelly said. “You can be a special team and get your tail kicked on weekends too, but the players we have right now are really special. … It’s a mature team. … They’re really disciplined in terms of what they want to do.” 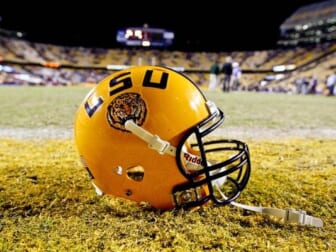 “If you ask me, I think we have the best running back duo in the country,” said quarterback Dorian Thompson-Robinson, who completed just 10 of 20 passes for 130 yards, which included a 44-yard touchdown to Kazmeir Allen.

UCLA held the Rainbow Warriors to 269 total yards and made two interceptions. Ale Kaho blocked a punt that David Priebe recovered in the end zone.

“Took care of the ball on offense, created turnovers on defense. … You couldn’t ask for more than that,” Thompson-Robinson said.

It was an encouraging start for a program seeking its first winning record in six years.

LSU is eager to put the disappointment of last season behind it by getting off to a winning start of its own. The Tigers were defending national champions when they were upset at home by Mississippi State 44-34 last season, setting the tone for a 5-5 record.

“This game is probably the most important starting game I’ve had since I’ve been head coach,” Ed Orgeron said of the opener for his fifth full season as head coach. “Our team knows that. For us to get on the right foot, to get to where we want to be, we have to start well.”

LSU also has been dealing with a series on injuries on offense. Sophomore Max Johnson won what was expected to be a close competition to be the starting quarterback when fifth-year player Myles Brennan suffered a broken bone in his non-throwing arm on the eve of preseason camp.

The Tigers’ two most experienced running backs — Tyrion Davis-Price and John Emery Jr. — have been sidelined for much of preseason practice. Sophomore Josh Williams and highly regarded freshmen Corey Kiner and Armoni Goodwin have gotten most of the preseason snaps.

“I want Tyrion and John to be our running backs,” Orgeron said. “But they haven’t remained healthy throughout camp. Let’s see if they come back (for UCLA). If they come back and play well, they’re going to be fine. But if not, we have to find out who’s our best running back.”

Starting guard Chasen Hines and top reserve offensive lineman Anthony Bradford also have been injured, but Orgeron is hopeful that they will be ready this week.