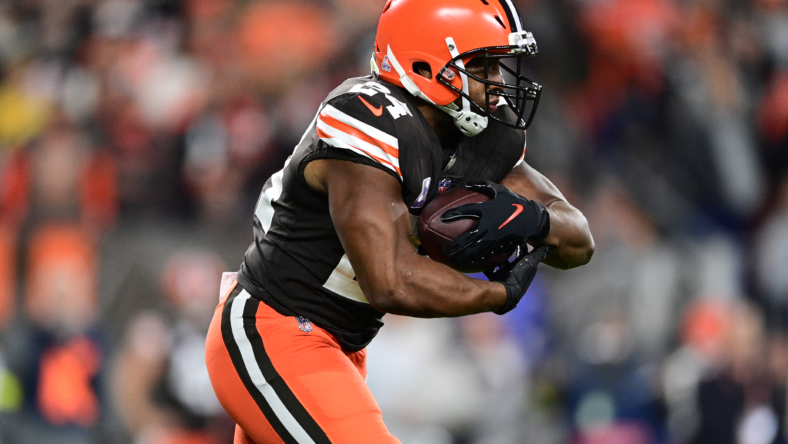 The final game on the Week 8 NFL schedule featured the Battle of Ohio, with the local kid Joe Burrow and his Cincinnati Bengals heading on the road, but not very far, to take on the Cleveland Browns.

It wasn’t the most exciting game. It certainly didn’t feature a lot of points, but it was still football. In what was mostly a defensive battle, let’s recap the biggest winners and losers from Monday Night Football.

When it comes to playing football on Halloween, maybe the Browns were the perfect choice. All-Pro pass rusher Myles Garrett is a bad man (in a good way), but if you’re tasked to block the freakish 6-foot-4 defender, you’re probably in trouble.

Taking on a Bengals offensive line that has caught their fair share of flack, Garrett knew he could be in for a big day. Left tackle Jonah Williams came into the matchup having allowed five sacks in seven games. It didn’t even take a full quarter for Garrett to add another in the sack column.

Even when trying to chip Garrett, the offense never stood a chance. Garrett also later added another half-sack, giving him 7.5 on the year.

Loser: Joe Burrow without his pal

It turns out, Ja’Marr Chase was the glue holding the Bengals together offensively. Even though the Burrow to Tee Higgins and Tyler Boyd connection had been strong through seven weeks with Chase, it was nonexistent against Cleveland.

Higgins and Boyd came into the matchup tied with 455 receiving yards apiece, averaging 65 per game. It’s not quite Chase’s 605 yards and 86.4 yards per game, but it’s still a very potent combo. Only, we didn’t see any evidence of a top-notch passing offense in Week 8. The two combined for six catches, 87 yards, a lucky score, and a somewhat legitimate one in garbage time.

The Browns were just teeing off on Burrow by the end of the game, knowing he had no choice but to drop back and throw, facing a multi-score deficit. Meanwhile, the QB finished his day completing just 25-of-35 passes for 232 yards, two TDs, and an interception. Only most of his work came with the game already decided. The Bengals had every opportunity to win, but they just didn’t have it today.

Looking to jumpstart an offense that came into the matchup ranked 22nd in the NFL in passing yards per game, head coach Kevin Stefanski tried to get a bit creative. In this case, he dialed up a play, having receiver Amari Cooper toss a pass instead of doing his usual thing. Looking back, this was far from a good decision. The execution was way off Christian McCaffrey’s effort on Sunday.

It turns out playing quarterback isn’t as easy as some make it look. In fact, Cooper’s effort makes Brissett look spectacular. Then again, maybe not. Brissett’s effort just before the half was one of the dumbest decisions we’ve seen this season.

Perhaps the Browns should stick to running. At least Brissett and Cooper redeemed themselves by otherwise putting forth a solid effort on the day where the QB missed just five passes.

Loser: Cincinnati Bengals look like a shell of themselves

Somehow the Bengals made the Browns look like one of the best teams in football after a few early adjustments. Obviously, as we saw above, it didn’t come without Cleveland making their own fair share of mistakes, but Cincinnati couldn’t capitalize on two terrible turnovers.

They got outgained, outscored, outplayed, and clearly outcoached. There’s no excuse for a team with Burrow, even without Chase, not to be able to put up at least 20 points on the board against a defense that hadn’t allowed fewer than 17 points to an opponent coming into the day. Knowing they won’t have Chase for what could be a few weeks, Taylor needs to have a better plan over the next few weeks.

Winner: Nick Chubb puts Browns on his back

What a beast. If it weren’t for Nick Chubb, not only would the Browns have much more trouble winning on Monday, but they also likely wouldn’t have any wins this season. Chubb has practically single-handedly shouldered the offensive burden for a lackluster scoring attack. While Brissett and Co. haven’t been great, Chubb has been excellent.

Even though defenders have seen hundreds of snaps of Chubb’s previous work, they still can’t help but get caught empty-handed reaching for the bag of candy as the three-time Pro Bowl back leaps over them. It doesn’t get much better than this hurdle by Chubb.

He’d finish with 101 yards and two touchdowns, averaging 4.4 yards per tote. Any time you can average nearly half a first-down on a play as safe as a run call, why try much else?