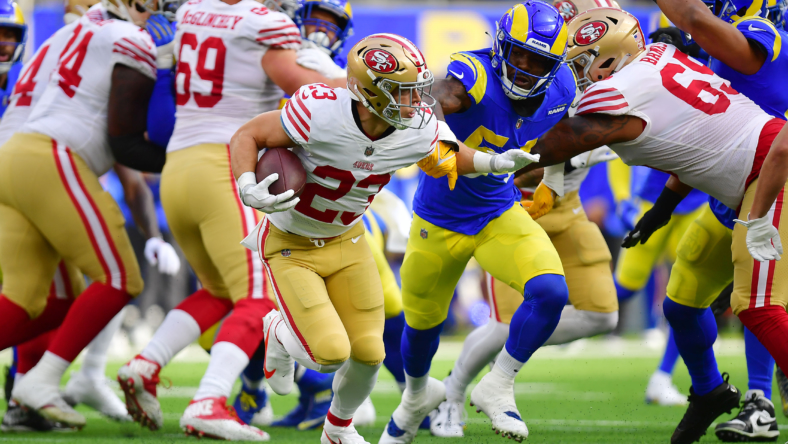 Christian McCaffrey has been a member of the Carolina Panthers for less than two weeks, but he’s already making an impact on the field. Strangely, his first touchdown didn’t come on the ground, and it wasn’t a TD catch either.

Instead, with CMC still not even knowing the full Kyle Shanahan playbook, they got their newest acquisition involved in a very unique way.

Incredibly, McCaffrey was asked to throw the ball on a gadget play after catching a pass from Jimmy Garoppolo behind the line of scrimmage, but he pulled it off. McCaffrey managed to find a wide-open Brandon Aiyuk in the end zone for a 34-yard touchdown pass to get the San Francisco 49ers on the scoreboard.

It was a big touchdown to help get the 49ers’ scoring started, matching the Rams at 7-7 in the second quarter, but it clearly caught the defense by surprise.

McCaffrey came into the game with three previous passing attempts, but he does actually have a passing touchdown to his name (now two) when he had a 50-yard TD strike back in 2018 with Carolina.

As Next Gen stats pointed out, the CMC toss was the longest distance a running back has thrown since 2016, which traveled 37.2 yards in the air. In other words, McCaffrey has a bit of an arm on him. While the impressive display of skills is cool, we’re still waiting for his first rushing score with San Francisco.

Credit to the 49ers for realizing the Rams would likely pay great attention to the All-Pro running back, making the pass to Aiyuk the perfect play call. We’ll see what coach Shanahan has up his sleeves next.