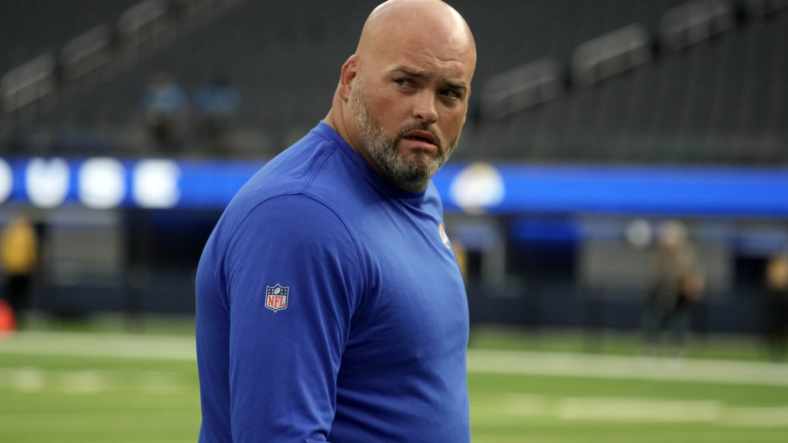 Now-retired four-time Pro Bowl left tackle Andrew Whitworth announced his decision to hang up the cleats shortly after winning his first Super Bowl ring with the Los Angeles Rams. His retirement was made official on March 15. Now, months later, with the regular season less than two weeks away, Whitworth may be getting the itch to return to the football field in 2022.

Yet, he’s not the only one interested. Whitworth suggested during the Thursday Night Football broadcast that his phone has been ringing, with teams trying to gauge his thoughts about coming out of retirement to join their franchise for this upcoming season.

It’s an interesting proposition, as Whitworth is still technically under contract with the Rams, only he’s on their reserve/retired list. Any team looking to bring Whitworth in would have to negotiate a trade with the Rams or hope the team is willing to release Whitworth, allowing him to continue his playing career elsewhere.

While Whitworth quickly walked back his comments, likely because he didn’t want to get anyone in trouble for tampering, the possibility of him playing a 17th season in the NFL remains.

There’s been no indication of Whitworth wanting to play anywhere other than in LA again, but if he does come back, it would surely be to play another season with a competitive team. With several organizations in need of strengthening their offensive line, Whitworth’s services would be in great demand if he makes his comeback official. Here are the four best fits for Whitworth ahead of the 2022 season.

The Dallas Cowboys had no idea their franchise left tackle Tyron Smith would go down with a torn hamstring that would sideline him for much of the upcoming season when assembling their roster. Sure, Tyler Smith was their first-round selection in April, and he may be the long-term starter to protect Dak Prescott‘s blindside, but we may not be there just yet.

Tyler Smith had been projected to begin his career as an offensive guard instead. Now he appears primed to fill in for Tyron at left tackle, but there could be another way for Jerry Jones to address his sudden weakness in the trenches.

Andrew Whitworth is a Louisiana native, and he may enjoy the opportunity to play closer to home with the Cowboys. The Cowboys should have one of the top offensive attacks in the NFL, but without stability at left tackle, that’s no guarantee. While publicly, the Cowboys aren’t stressing about Tyron’s injury, privately, they have to be cursing in JerryWorld. Whitworth can help clean up the place for good.

Not all that different from the injury situation in Dallas, the New Orleans Saints also have developed a strong need to improve at left tackle. Rookie first-round tackle Trevor Penning tore a ligament in his foot in the preseason finale on Friday. He’ll need surgery, but his timetable to return is unknown.

James Hurst stepped up last season when Terron Armstead battled injuries. He played 59% of his 941 snaps at left tackle and allowed just one sack as a bookend. But Hurst can play every position except center, and there’s a reason the Saints selected Penning, to begin with. They’ve added multiple veterans on both sides of the ball in preparation for a possible postseason run. Why not add another with Whitworth? He’d even get to play in his home state of Louisiana.

Nothing went right for the New England Patriots offense during the preseason. With Patriots reporter Mike Giardi noting offensive tackle as a “concern” after paying close attention to the situation all summer, maybe it’s time the team does something about it.

We’ve heard Mac Jones own up to some of his early struggles. Their play-caller situation is another that bears watching, but for both the passing and running games to be most effective, they need consistent play from their tackles. Isaiah Wynn, their 2018 first-round pick, appears to be on the trade block after losing his starting left tackle gig to Trent Brown, yet the latter hasn’t exactly dominated as the blindside protector either. If Wynn is traded, the Patriots could try and move Brown back to his natural position at right tackle and sign/trade for Whitworth.

Despite being 40, Whitworth is more proven on the left side and still played at an elite level with the Rams in 2021. Whitworth graded as the fourth-best left tackle according to Pro Football Focus, yet he had the best pass blocking grade at his position in the NFL. Landing Whitworth could drastically turn a concerning situation into one that can compete right away.

Related: Bill Belichick: New England Patriots ‘might have left it on the practice field’ after ugly preseason finale

Of course, the easiest route for Whitworth to return would be to pick up where he left off in LA. Why not try and run it back to see if he can double his Super Bowl total?

His replacement, Joseph Noteboom can’t be rooting for it, but the Rams don’t know what to expect out of the unproven 27-year-old just yet. A three-year, $40 million contract extension signed in March suggests they’re all in on Noteboom, but it’s hard to see Sean McVay turning down a chance to bring back a player he knows can help his team reach the promised land.

Whitworth is already a record holder for being the oldest tackle to play in a game and the oldest offensive lineman to win a Super Bowl. He might be considering a chance to put those records even further out of reach. Based on his outstanding play last season, why not give it another go? Of course, as he said, it’s probably up to the boss (his wife).