Update: Various reports note that Tyron Smith has suffered a torn hamstring and is going to miss months of action.

Dallas Cowboys star left tackle Tyron Smith is expected to be among the most-important members of the team heading into the 2022 season, starting Week 1 against the Tampa Bay Buccaneers.

Dallas hopes that the eight-time Pro Bowler and future Hall of Famer will actually be on the field for said game. Smith, 31, exited practice early on Wednesday after suffering a knee injury. The video of said play did not look good as Smith was seen on the turf holding his left knee.

Smith immediately left to meet with the Cowboys medical team for a review of the injury. After some initial concern, Todd Archer of ESPN reports that reviews of Smith’s knee show that his ACL is intact. Smith will have further tests on his knee Thursday morning.

Tyron Smith injury and importance for the Dallas Cowboys

Even with Smith avoiding an ACL tear, there’s a chance that he could miss some time. It will all depend on the MRI he receives Thursday.

For Dallas, the idea of losing Smith long-trem can’t be seen as great. He’s the anchor of the team’s rebuilt offensive line in front of Dak Prescott and has been among the best left tackles in the NFL since Dallas made him a first-round pick in the 2011 NFL Draft.

Dallas’ best offensive lineman since Larry Allen was in his heyday, it’s hard to stress just how important he is to the Cowboys’ success. 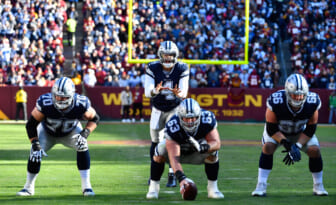 It wasn’t too long ago that the Cowboys had one of the best offensive lines in the NFL. However, the retirement of center Travis Frederick following the 2019 season and La’el Collins’ departure this past spring has created some issues. Right now, rookie first-round pick Tyler Smith is slated to start at left guard next to Tyron Smith.

As with any story of this nature, we’ll have further updates on Smith’s injury as more information comes out. For now, the Cowboys are breathing a sigh of relief.