The New England Patriots didn’t want any quarterback controversy hovering over them entering the 2021 season, so they opted to roll with rookie Mac Jones and release Cam Newton on Tuesday.

Newton doesn’t seem like the type of signal-caller who’d accept a backup job, but given how late he was cut, he has no other choice. His best-case scenario is latching on somewhere and competing for a QB1 spot in 2022. With that in mind, let’s look at Newton’s top three free-agent destinations.

Hard to imagine a better head coaching fit for Cam Newton than Pete Carroll. The Seattle Seahawks coach is famously player-friendly and lets his stars speak their minds to no end.

Tensions were high this offseason as Russell Wilson mulled a potential trade out of the Emerald City. If things don’t go well this year, Wilson could very well ask out from Seattle, which would leave a huge void at the most important position.

While the prospect of moving from Wilson to Newton seems like a significant step down in theory, there’s merit to it. Newton wouldn’t be as averse to a run-heavy offense as Wilson was in 2020, and his style of play isn’t dissimilar to the Seahawks superstar.

See if Seattle makes the postseason cut in our NFL playoff predictions, where we also forecast a Super Bowl winner

Obviously, Wilson is a far superior passer in terms of accuracy, but if you think about it, Newton has never truly had elite wide receivers at his disposal, even during his apex with the Carolina Panthers. Having the likes of Tyler Lockett and DK Metcalf to throw to, if and when he plays, could help Newton revitalize his career.

That’s a pipe dream, of course, until Wilson is no longer in a Seahawks uniform. He and Carroll seem to have patched things up for now, but let’s see what happens

Also Read:
Seattle Seahawks could be creating a further rift with Russell Wilson

How ridiculous does this sound? Maybe not as much as it appears upon reading that boldfaced subheading, which, believe it or not, isn’t merely designed to paint the author as a provocateur.

Think about it this way: Who do the Bucs have behind 44-year-old Tom Brady? Rookie second-rounder Kyle Trask looked overwhelmed in the preseason and, at least prior to roster cuts, had yet to earn the QB3 spot on Tampa Bay’s roster.

Blaine Gabbert has proven he can’t start in the NFL, too, and Ryan Griffin is — wait, who’s Ryan Griffin?

It’s completely unclear how much longer Brady will play football. He’s defied the odds to date. No one should doubt the GOAT. Maybe he could physically play three more years, but if the Bucs win another championship this coming postseason, TB12 could opt to go out on top with an eighth Super Bowl ring. You never know. 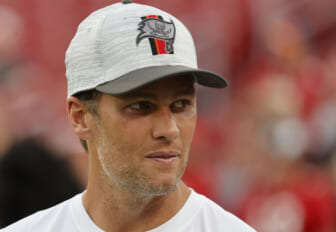 By the way, perhaps no team is as loaded on offense as the Bucs. They go legitimately six deep at wide receiver, and have Rob Gronkowski, Cameron Brate and (for now) O.J. Howard at tight end. Leonard Fournette, Ronald Jones and Ke’Shawn Vaughn should all play out of the backfield, too.

Although it’d take some schematic tweaks to accommodate Newton’s skill set, it’s not like Tampa Bay has shunned Brady’s input. In fact, TB12 brought over some of his stuff from the New England Patriots, and that was key in helping the Bucs win the Super Bowl.

Newton just spent two seasons learning many of the offensive principles Brady brought to Tampa. There should be carryover in that sense, and with some designed QB runs sprinkled in, Newton could eventually be next in line after Brady, or at least provide competition for when Trask presumably rises to take the reins.

Colorful personalities haven’t scared off the Pittsburgh Steelers in recent years. Despite all the noise and relative chaos surrounding the organization, though, the Steelers remain an exemplary model of how to run an NFL team.

Newton could fall into much worse situations than Pittsburgh, who’s all-in to win in 2021 with Ben Roethlisberger under center, but beyond that, the future looks murky at best in terms of a contingency plan.

The young core of skill position players in running back Najee Harris, and wideouts Chase Claypool and Diontae Johnson — not to mention promising rookie tight end Pat Freiermuth — provide Newton with a decent nucleus to work with. Plus, as long as the Steelers extend T.J. Watt successfully, they’ll continue to have an elite defense.

Click here for our latest NFL defense rankings, as T.J. Watt and the Steelers rate among the league’s best

Pittsburgh fans may not be overly enthused about adding Newton to the mix. Then again, is there any reason whatsoever to be excited about the futures of Mason Rudolph and Dwayne Haskins at this moment? Not really!

Newton’s unvaccinated status may be an X-factor that determines his immediate NFL future. If he gets the shots in the arm, his list of suitors will grow, because as the COVID-19 protocols linger, QB depth will be at a premium.