In this 2021 NFL Draft breakdown, discover five key, underrated prospects who should prove to be big hits in the pros. 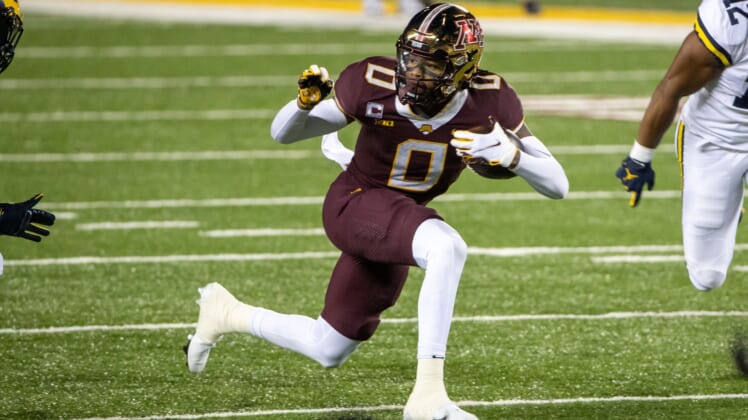 The 2021 NFL Draft is quickly approaching, and with so much discussion revolving around the players expected to go early, such as presumptive No. 1 overall pick Trevor Lawrence, it’s worth digging deeper into some underrated prospects who should probably go off the board earlier than they’re likely to.

First, we’ll get into some first-round players who aren’t getting enough love either due to depth at their position or overblown red flags. Then, we’ll zero in on some potential Day 2 selections who have the potential to be among the biggest steals of the draft.

Here’s a nice mix of players from various positions who are underrated in their own unique ways entering the NFL Draft, but could well transform into legitimate superstars who teams will kick themselves for passing on in the years to come.

Now that Justin Fields is apparently emerging as the front-runner to be the San Francisco 49ers’ No. 3 overall pick over previously presumed favorite Mac Jones, there are four quarterbacks squarely at the center of the pre-draft discussion.

One man getting lost in all that is Trey Lance. Only turning 21 in May, the North Dakota State signal-caller boasts a tantalizing blend of advanced football acumen, serious dual-threat ability and mind-blowing arm power.

Although his ball placement leaves something to be desired and his one full season of college starting experience against FCS competition are worthy criticisms, there’s also a flip side to that. Imagine what Lance could do with NFL coaching, as a member of a stable franchise who’s fully committed to him as its QB of the future.

Lance did hail from a pro-style offense at North Dakota State. He knows how to execute those concepts, has plenty of experience lining up under center and can already process and get through progressions better than any 20-year-old you’re bound to find. His cannon for a right arm and breakaway speed as a ball-carrier hint at the insane upside Lance has.

Because of all these unique elements, Lance is among the most fascinating QB evaluations in NFL Draft history. obviously, for a team at the top of the draft like Jacksonville or the New York Jets, there’s pressure to take someone who’s perceived as ready to play and win now. Lawrence and Zach Wilson appear to fit that bill, as does Jones, and now it seems like people are coming around on Fields.

Heck, even perceived Tier 2 QB Kellen Mond is getting lots of hype because of his four-year starting tenure at Texas A&M and his pro-style system roots.

Despite his youth and relative game inexperience, Lance may actually wind up being the absolute best quarterback in the entire 2021 class, and that includes Lawrence. He’s also probably readier to play — and play well — than most realize.

It’s a pretty stacked class of wide receivers, but Rashod Bateman could actually wind up being the best of the bunch. That sounds like such a ridiculous hot take when prospects like Ja’Marr Chase, Jaylen Waddle and DeVonta Smith are out there, right? Trust this: it’s not as crazy as it sounds.

Think about it this way: Chase is almost certain to be the first receiver off the board, which means he’ll go to an inferior team. There are at least some concerns that Smith’s slender frame might be a detriment to translating his Heisman Trophy-winning success to the NFL. Waddle was hurt for a good chunk of 2020, and any talk of him being WR1 is tied to his comparisons to Tyreek Hill, who’s a one-of-one playmaker.

No one’s really hyping up Bateman, and someone should. This could be the second coming of a Justin Jefferson situation. Jefferson slipped in last year’s draft due to perceived top-end speed issues and route-running. As it turns out, Jefferson wasn’t hurting for speed, was arguably the best route-runner coming out, and had a ho-hum 1,400-yard receiving season as a rookie.

Bateman may not reach those ridiculous numbers, yet if he lands in the right spot somewhere in the second half of the first round, he’ll make some quarterback very happy. With pro-caliber route-running chops already, plenty of strength at the catch point, and better burst than most evaluators would have you believe, Bateman is a complete package.

No, Bateman doesn’t have the elite speed of Waddle, the pure ball skills of Chase or the quick-twitch skill set of someone like Smith. However, he mixes all those attributes into a well-rounded arsenal that should garner him more appreciation than he’s receiving right now. Look out for Bateman to take the NFL by storm upon his arrival in 2021.

A microdiscectomy has torpedoed Caleb Farley’s draft stock. Before that, he was talked about as the first defensive back on the board. That’s why he’s on this underrated list, because to be frank, the whole situation is being completely overblown.

If you do a basic Google search of that back procedure, some of the first words that pop up are “minimally invasive.” Any kind of surgery isn’t something to scoff at, particularly when it’s related to someone’s back. However, teams should be more worried about medical red flags in cases like Jaelan Phillips, who’d probably be the first edge defender drafted if not for a history of multiple concussions.

Look, there’s nothing wrong with taking a polished, ready-made pro like Patrick Surtain II. Even South Carolina’s Jaycee Horn has the tenacity and pure man cover skills to be a Pro Bowl-caliber player for a long time. Neither of them have even close to the upside of Farley, who opted out of 2020 but was dazzling the year before.

There’s a chance Farley falls out of Day 1 — or, more likely, a Super Bowl-contending team realizes the golden opportunity at hand and either trades up for him or waits patiently until he falls to them near the end of the opening round.

Farley does have some technique issues to work on and is still learning the position after converting from wide receiver. Nevertheless, we’re talking about a corner who might have the best pure physical tools entering the draft since…I mean, to be real? This is like Jalen Ramsey or Patrick Peterson-level stuff we’re talking about here as far as size-speed-quickness combination.

Sounds worth the risk. Also consider: The two most prominent defenders who come to mind as having medical red flags are linebackers Jaylon Smith and Myles Jack. It’s a bit of apples to oranges, but if those two can overcome their injuries at a much more contact-heavy position, why can’t Farley transcend his to be a premier cornerback?

There’s this perception that because Carlos Basham Jr. tips the scales at around 275 pounds that he has limited explosiveness or that he lacks athleticism.

First of all, maybe that’s because there are just straight-up freak shows among the 2021 crop of edge defenders such as Michigan’s Kwity Paye and Penn State’s Jayson Oweh. They are complete and total outliers, what with Paye’s insane 3-cone drill and Oweh’s sub-4.4-second 40-yard dash.

But not only did Basham enjoy a much more productive collegiate career than Paye and Oweh — he’s also an excellent athlete in his own right. Per NFL Network’s Daniel Jeremiah, Basham’s 10-yard split in the 40-yard dash of 1.63 seconds was faster than Paye’s and not far behind Oweh’s 1.59.

In terms of overall athletic profile, too, Kent Lee Platte ranks the Demon Deacons standout extremely high among 1,300-plus defensive ends since 1987:

Basham’s size is an asset. He can play outside or inside, and even though you may look at his bench press numbers and think, “uh-oh,” don’t worry. He has advanced techniques when it comes to hand placement and understanding of leverage. With great lateral quickness, change of direction and tremendous lower-body strength, Basham is an absolute beast.

With 33.5 tackles for loss and 19.5 sacks over 31 games in his final three seasons at Wake Forest, there’s no questioning Basham gets it done from a testing standpoint and in terms of on-field production.

The game tape backs all that up, but Basham will probably slide to some lucky team in Round 2 based on the lack of buzz about him.

Another loaded position group is offensive line, or at least that’s the perception surrounding the 2021 NFL Draft.

As a result, someone like Northern Iowa’s Spencer Brown, who’s from a smaller school and is thus less proven against elite competition, isn’t going to be boldly drafted in the first round, and may not be in the second or the third.

Would that ever be a mistake. Senior Bowl director Jim Nagy even implied as much after seeing Brown firsthand in Mobile, Alabama, as his testing numbers boggled everyone’s minds:

Yes, Brown is raw, but his innate traits are just too insane not to take a chance on. His frame is lean, but then again, Brown is 6-foot-8 and still obviously has plenty of strength on him. To get up 29 reps on the bench press with his length is an incredible feat.

Something else that makes Brown unique is the fact that he’s a right tackle. Having someone this skilled at that spot is rare, as most teams are still geared toward protecting their quarterback’s blind side, which is usually on the left.

Because edge rushers have become so explosive, and the league is much more pass-happy these days, it’s all the more critical to have a traditional left tackle-caliber pass protector on the right side. Few prospects, if any, have Brown’s ceiling in that regard on the right side.