The 150th Open Championship begins and in fitting fashion, the final major of the season is taking place at the birth of golf. The Old Course at St. Andrews.

This is the 30th time the Open Championship will be held at the Old Course, which is the most of any course hosting this event.

Although there might be some forgiving fairways throughout the St. Andrews course, pot bunkers around each hole can be tough to get out of and mother nature plays a second challenge this week with rain and wind expected in the forecast.

“It’s going to be a game of chess this week,” 2014 Open Champion Rory McIlroy said on Tuesday.

In the field or not, some the game’s best players are on hand to celebrate this historical tournament, including 18-time major champion Jack Nicklaus.

Related: Golfers with the most major victories

On Tuesday, Nicklaus became just the third American and first in over six decades to be named the honorary citizen of St. Andrews, Scotland. Nicklaus joined investor and statesman Benjamin Franklin in 1759 and golfer Bobby Jones in 1958 as the other Americans to receive the honor.

Defending champion Collin Morikawa, who won last year’s Open Championship at Royal St. George, is relishing the nostalgia of this historical event with many living legends in attendance.

Another experience players and fans alike will have is the opportunity to witness 15-time major champion Tiger Woods, who has won twice at St. Andrews in Open Championship fashion in 2000 and 2005. It is his first time competing since withdrawing from the PGA Championship in May.

Woods, who skipped the U.S. Open last month to ensure he would play this week, said he wanted to be in the field because of the things he earned at St. Andrews throughout his career.

First round play begins on Thursday as everyone in the field is looking to win a memorable and historic Open Championship along with the Claret Jug.

Here are 10 players who can win the Open Championship.

Cameron Smith enters this week with a top-10 finish at last week’s Genesis Scottish Open. It was his first tournament since missing the cut at the U.S. Open last month. Earlier this year, Smith finished inside the top-15 at the PGA Championship and tied for third at the Masters in April.

Before the Masters began, Smith won the PLAYERS Championship in March and the Sentry Tournament of Champions in January.

Smith ranks second on the PGA Tour with a 4.70 birdie average per round and fourth with a 69.25 scoring average this season.

In Smith’s two previous Open Championships, he has made the weekend both times — finishing at 1-under in 2019 and 2-under last year.

Patrick Cantlay has seven PGA Tour titles, but none have come in major tournament fashion. Cantlay, who finished inside the top-5 at last week’s Genesis Scottish Open, is looking to bring that momentum, and more, this week at St. Andrews.

As last week’s Scottish Open progressed, Cantlay’s four-round scores dropped. After scoring even par 70 in both the first and second rounds, the 30-year-old shot a third-round 69 and a final round 67.

In his three Open Championships, Cantlay’s best finish came in 2019 when he shot 3-under and finished just outside the top-10.

Related: Will Zalatoris’ excitement level ‘off the charts’ for The Open Championship

Over the last few majors this year, we have seen how close PGA Tour rookie Will Zalatoris has come to winning with second place finishes at the PGA Championship and the U.S. Open, followed by a sixth-place card at the Masters.

Zalatoris, who is one of many players competing at St. Andrews for the first time this week, said he is using his previous runner-up finishes for experience purposes in the future.

“Of course, I want to win one, but I also have to remind myself is we’re sitting here talking about me not winning a major and I’ve been on the PGA Tour for 20 months,” Zalatoris said Tuesday.

At the PGA Championship in May, Zalatoris lost in a three-hole aggregate playoff to Justin Thomas. At the U.S. Open last month, Zalatoris missed a 14-foot putt to force a playoff against Matt Fitzpatrick.

Jordan Spieth enters this week’s Open Championship as a past champion with his win in 2017 at Royal Birkdale and a second-place finish last year.

Spieth said he can’t wait to play this week with the awe St. Andrews brings and its history.

Last time at St. Andrews for the Open Championship in 2015, Spieth came one stroke short of the three-man playoff and finished fourth.

However, Spieth said he has more motivation as he his playing in his eighth tournament in the last 10 weeks.

“I think of myself as having a bit more momentum in 2015,” Spieth said. “I don’t know how you can have more. But I think there’s certain parts of my game that I feel stronger.”

Morikawa enters this week looking to retain the Claret Jug on Sunday after his Open Championship victory a year ago.

The 25-year-old realizes the urgency this week brings as it is the final major of the year.

“I’ve got to step it up. Look, we get only four majors a year and we’re already at number four,” Morikawa said. “I don’t want to look back at this year and kind of not be happy about what I did and how I prepped. So, I’m doing everything I can to get ready for this week and hopefully we can put together four really good rounds.”

Despite missing the cut in two of his last three events, Morikawa has a top-five finish sandwiched in between his missed cuts at the U.S. Open last month.

Morikawa has been looking to get back on track by studying different numbers to improve his clubs and his swing ahead of the final major.

“I think I’ve figured that out this year,” Morikawa said of his irons. “Driver hasn’t been great and kind of my wedge shot with my 60 degree. Already made some changes and feeling great now.

“It was a simple grind on the wedge and then driver had to have a little more spin. I’ve been playing all year with too little spin or way too much spin. I haven’t found that middle zone to be able to hit that one shot I can trust down the line.”

The 2022 U.S. Open Champion is looking become just the fourth player ever to win the Open Championship (or British Open) following a U.S. Open victory. If Fitzpatrick can accomplish that feat, he would join Woods (2001), Lee Trevino in 1971 and Tom Watson in 1982.

Fitzpatrick, who only trails Rory McIlroy for the best scoring average on the PGA Tour this season, said playing American courses does not compare to St. Andrews and links courses and will be a challenge to some this week.

The 27-year-old, who finished inside the top-10 last week at the Genesis Scottish Open, is right outside the FedEx Cup standings top 10 at 11th place. With all FedEx Cup standings players inside the top 10 playing this week, a quality showing and with some help from those right above, Fitzpatrick can find his way there come Sunday and a month before the playoffs begin.

Xander Schauffele is one of the hottest players in the game right now, having won in his last two starts and three times in his last seven starts.

Schauffele won last week’s Genesis Scottish Open, which was co-sanctioned by both the PGA Tour and the DP World Tour for the first time — scoring 7-under par.

Two weeks before, the 28-year-old won the Travelers Championship that gave him his first individual PGA Tour title in over three years and his first win on Tour when holding a 54-hole lead.

Schauffele has risen to No. 3 in the FedEx Cup Standings and No. 5 in the Official World Golf Rankings, looking to finish this stretch strong ahead of the FedEx Cup playoffs next month.

This tournament is one of the last for Scottie Scheffler to have a large amount of momentum before the playoffs.

The 25-year-old is looking to become the first golfer since 2018 and fourth golfer in eight years to win multiple majors in a year when Brooks Koepka won the U.S. Open and the PGA Championship.

Scheffler, who had never won on the PGA Tour before this season, won four events in a six-start span — ending with his first green jacket at Augusta National in April. Win or not, Scheffler will still remain in the top spot in both the Official World Golf Rankings and the FedEx Cup Standings with the winner receiving 600 FedEx Cup points.

Jon Rahm comes into the Open Championship for the final major of the year by making cuts at each of the previous six major tournaments. However, his best finish among the three majors was a 12th place finish at last month’s U.S. Open.

Since his first Open Championship in 2016, Rahm’s best finish came last year when he tied for third with Louis Oosthuizen at -11.

Last month at the U.S. Open, Rahm started well shooting 69 and 67 through his first two rounds before faltering with rounds of 71 and 74 on Saturday and Sunday at The Country Club in Brookline, Mass.

Although Brookline is a complete 180 degrees from St. Andrews, if Rahm can start the way he did and continue that throughout the week, he has the chance to raise the Claret Jug on Sunday. 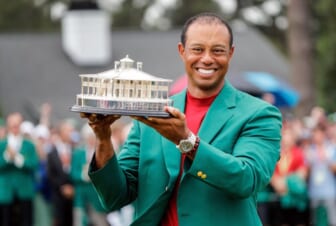 Rory McIlroy, who became the one three players win four majors before the age of 25 in 2014 joining Woods and Nicklaus, is in the field this week and one of the favorites looking to win his second Claret Jug.

The Northern Ireland native, who will tee off with Morikawa and Schauffele, has been the top scorer on the PGA Tour this season — averaging a 68 in an 18-hole round.

McIlroy said winning this week at this course in particular, also known as The Home of Golf, would be special.

“It’s the holy grail of our sport,” McIlroy said. “So, not a lot of people are going to get that opportunity to achieve that, but that’s what winning at St. Andrews is. It’s one of the highest achievements that you can have in golf.”