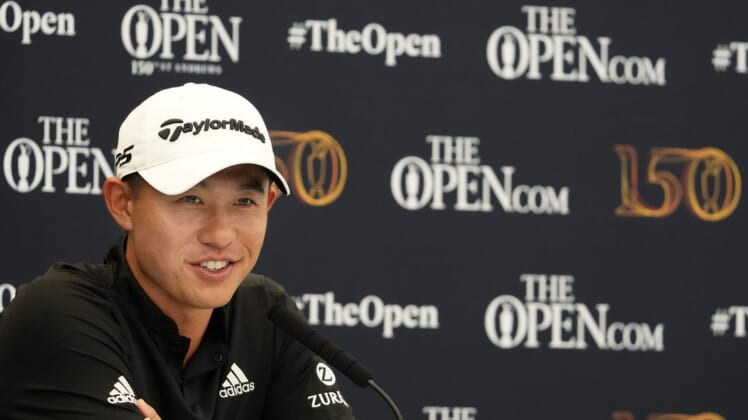 Ahead of the 150th Open Championship at St. Andrews this week, defending champion Collin Morikawa spoke on behalf of his peers about what it meant for Tiger Woods to be on the grounds.

After Woods withdrew from the PGA Championship after three rounds due to ongoing pain in his surgically repaired right foot and leg, he skipped the U.S. Open in order to be fit and ready for the Open.

Morikawa said his generation of PGA Tour players, which grew up idolizing Woods, has to be grateful to see the 46-year-old any time he’s competing.

St. Andrews, the famed Scottish venue hailed as the birthplace of golf, hosts the Open Championship roughly every five years. Woods won there in 2000 and 2005.

Woods played practice rounds at the Old Course on Sunday and Monday. He also participated in a four-hole “celebration of champions” exhibition on Monday.

Morikawa, the 25-year-old with two majors already under his belt, said it’s been “amazing” to become closer with someone he grew up admiring.

“It’s cool to see that — I’m going to call it a friendship. He can call it whatever he wants,” Morikawa said. “Whatever this relationship, this friendship that we have, it’s gone past the ‘I’m in awe and I’m in shock’ to now you can joke around and you can talk to him, and you can give him a call if I really needed something.

“I’ve never done it. I’m actually scared to,” he joked.

Morikawa said he talked with Woods earlier this year and learned about what it takes for Woods “just to walk every day,” following the single-car accident in February 2021 that nearly required his leg to be amputated.

“All this love that you guys give him, he wants to beat us so bad,” Morikawa said, “and I do too. I tell him that … He’s such a competitor (and) that’s what’s awesome about him. Even though he’s gone through everything he’s gone through.”