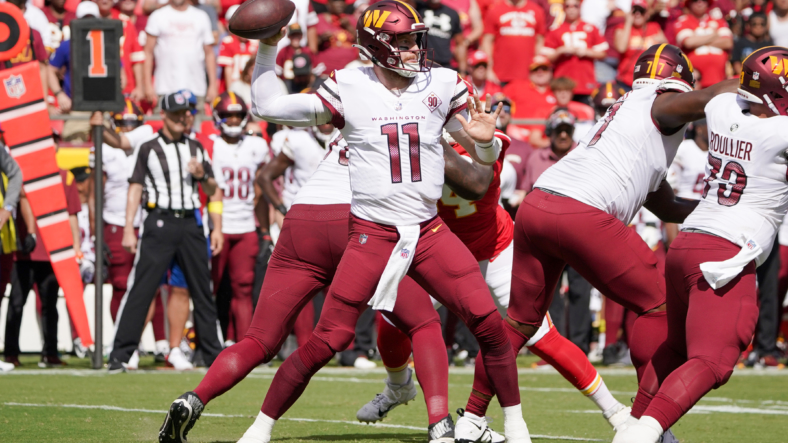 The Washington Commanders vs Jacksonville Jaguars will open the season with plenty to prove in Week 1. Many expect both clubs to finish near the bottom of the NFL standings, but both franchises have hope of becoming breakout teams in 2022.

Sunday afternoon’s Jaguars vs Commanders game offers plenty of intrigues. It’s not one of the primetime games on the NFL schedule, but it does offer an intriguing quarterback battle and there is exciting talent on both rosters. Washington is looking to rebound with Carson Wentz leading the offense, while Jacksonville is counting on the new coaching staff to get the most out of Trevor Lawrence.

Related: 3 reasons to watch the Washington Commanders in 2022

Washington’s offensive line looks a lot better than it did a few years ago. After signing with the franchise in 2021, Charles Leno Jr. became a standout at left tackle this past season. He only allowed seven hits and six sacks in 678 pass-block snaps, receiving a stellar 87.3 pass-blocking grade from Pro Football Focus. Meanwhile, center Chase Roullier became an anchor on the interior and Samuel Cosmi really blossomed towards the end of his rookie season.

Sunday is going to be a challenge. The Jaguars have assembled an excellent defensive line, surrounding edge rusher Josh Allen (50 pressures, 33 hurries in 2021) with complementary talent. Folorunso Fatukasi is an underrated defensive tackle, arguably one of the best interior run stuffers in the NFL from 2019-’20. Jacksonville also has Arden Key (36 pressures in 260 pass-rush snaps) as a situational rusher. Most importantly. No. 1 pick Travon Walker appears to be the real deal.

The Commanders’ offensive line will be busy on Sunday. It helps that this group features veteran Andrew Norwell and Trai Turner, but both guards missed time this summer with injuries and there are concerns about a dropoff because of age. The battle in the trenches will prove crucial to the Week 1 outcome.

The Christian Kirk contract created plenty of jokes for NFL fans and analysts this offseason, overshadowing the importance of him joining the Jaguars’ offense. The Arizona Cardinals finally discovered how to use Kirk correctly in 2021 and it resulted in a career-best season. While he fell short of a 1,000-yard season, a 114.5 passer rating when targeted and 3.1 yac per reception are just as impressive.

Washington’s secondary will be put to the test. Safety Bobby McCain will be tasked with providing help deep, but he’ll also need to provide assistance underneath with Kamren Curl likely out. It puts even more pressure on second-year cornerback Benjamin St-Juste, who moved inside to the slot after getting torched in coverage as a rookie. If the Commanders fail to bottle up Kirk, Lawrence won’t have any issue helping his new wideout deliver a 100-yard performance.

We can’t talk about the Washington Commanders without addressing Wentz. Reports out of training camp were awful, adding fuel to the rumors about why Wentz was pushed out by his last team. Some of those concerns quieted thanks to a solid preseason, but there’s an argument that exhibition games mean even less for veteran quarterbacks than summer practices.

That’s why there should be so much focus on the Jaguars vs Commanders opener. Wentz won’t be facing one of the best defenses in football but he is battling against a quality pass rush. It means this is an important test for a quarterback whose production really dropped when he faced pressure in 2021.

The Commanders provided Wentz with the fresh start he wanted and they surrounded him with weapons. If he wants to prove he can be a viable long-term starter and aims to demonstrate Washington is a playoff threat, he must provide consistency in Week 1 because this is a winnable game.