Tua Tagovailoa encountered plenty of obstacles in his first NFL season, recovering from a career-threatening injury and then entering the league amid a COVID-19 pandemic. Given the opportunity to work through a normal offseason, things seem to be going well at Miami Dolphins training camp.

It wasn’t a forgone conclusion this spring that Tagovailoa would still be in Miami. When Houston Texans star Deshaun Watson demanded a trade, the Dolphins were immediately floated as a landing spot and NFL rumors surfaced about their efforts to land him.

But with training camp underway and Week 1 on the Dolphins’ schedule arriving, Miami is prepared to commit another year to its top pick from the 2020 NFL Draft. Fortunately for the organization, he is making a strong impression thus far in camp.

Barry Jackson of the Miami Herald spoke to multiple players after the first week of practices, with many raving about how the 23-year-old quarterback has looked thus far.

“He’s letting it fly this year. He was last year, but he looks a little more comfortable back there, making some tough throws, putting it in the hole, leading the receivers.”

One major flaw in Tagovailoa’s game this past season, which impacted Miami’s offense when he started, was a lack of familiarity with the playbook. He even admitted this offseason that he never had a full grasp of the playbook.

Much of the blame for that can fall on the COVID-19 pandemic. NFL teams weren’t allowed to hold rookie workouts or minicamps last year, taking away practice reps that Tagovailoa desperately needed. But the suspended preseason hurt him even more, taking away the young signal-caller’s opportunity to implement things he learned.

After appearing in 10 games last season and dedicating his offseason to learning Miami’s system, teammates seem to be impressed with how much Tagovailoa picked up and noting the impact it has on practices.

“He’s always had accuracy. That was never a problem. He always had the zip, always had the power. I just believe it’s that year-two jump that everyone needs to make from their rookie year. And obviously the type of offense. Last year, I even noticed his playbook was condensed to slants and bubbles. They really wouldn’t let him show his arm. Now seeing training camp, a lot more deep routes, they’re allowing him the opportunity to throw it deep. That’s what we need.” 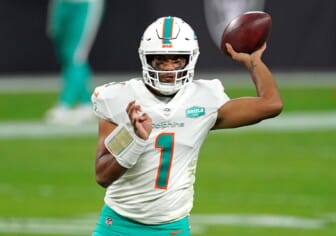 It’s the most important development for the second-year quarterback and will have the biggest influence on the Dolphins’ record this season. Miami enters 2021 with one of the highest-ranked groups in Sportsnaut’s NFL defense rankings and is a projected playoff contender.

If Tagovailoa is more consistent in 2021 and lifts the ceiling on Miami’s offense, this team can return to the playoffs for the first time since 2016. But if he doesn’t improve, head coach Brian Flores isn’t afraid to make a quarterback change and that might be even more permanent in 2022.