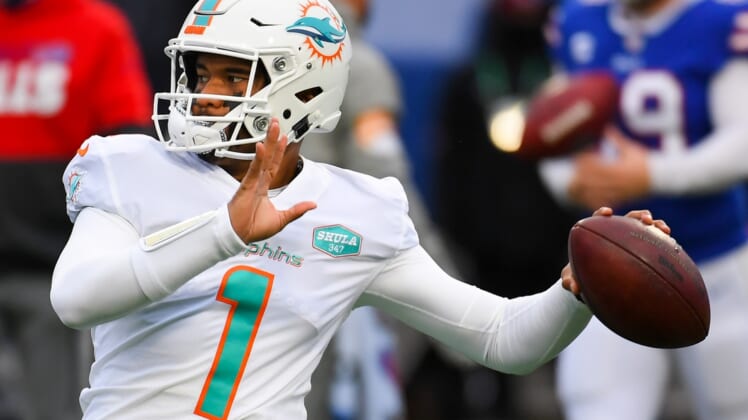 “Honestly, I just think he’s comparing last year to where he is right now — and I get it. I understand that,” Flores said.

“I think he’s thinking about where he is right now versus that time a year ago, just reflecting. And that’s good because this time of year is about reflection, and where you are now versus six months ago.”

“I wasn’t as comfortable just in general. I wasn’t comfortable calling plays. … I just didn’t have the comfortability of kind of checking plays, alerting plays and doing that. I just rode with the play even if I knew in a way that it wasn’t going to work. I was going to try to make it work still.”

When asked to clarify his comment, Tagovailoa offered the following:

“Actually, what I’m saying is that I didn’t actually know the playbook necessarily really, really good, and that’s on no one else’s fault but my fault. Our play calls were simple when I was in. I didn’t have alerts and checks whereas now, feeling more comfortable, I can kind of maneuver my way through these things now.”

Tagovailoa made nine starts for the 10-6 Dolphins as a rookie last season, compiling a 6-3 record and completing 64.1 percent of his passes for 1,814 yards with 11 touchdowns and five interceptions. He also rushed for 109 yards and three scores.

Tagovailoa was selected by the Dolphins with the fifth overall pick of the 2020 NFL Draft.