Jacksonville Jaguars quarterback Trevor Lawrence was seen as a generational prospect heading into the 2021 NFL Draft. It led to the former Clemson star going No. 1 overall in the annual event.

The same thing can’t really be said about Patrick Mahomes of the Kansas City Chiefs leading up to the draft in 2017. Despite starring at Texas Tech, Mahomes found himself as the 10th pick in the draft. He was selected behind bust Mitchell Trubisky that year.

These two will meet Saturday afternoon in Kansas City during the AFC Divisional Playoffs. While Mahomes has the obvious advantage heading into this one, we figured it made sense to look at how these two quarterbacks performed in their first two seasons as starters. It could give us a glimpse into Lawrence’s future as he leads his upstart Jaguars into Arrowhead as major road underdogs.

We can’t look at this through a general point of view. Mahomes actually sat behind Alex Smith as a rookie in 2017. Once he took over as a sophomore, the Chiefs were a legit Super Bowl contender.

Lawrence started out of the gate for a bad football team and was impacted big time by a one-and-done head coach (more on that later). With that as a backdrop, let’s look at how the two stack up in their first two seasons as starters in the NFL.

The obvious advantage goes to Mahomes here. He had more than twice as many touchdown passes with eight fewer interceptions.

The good news for Lawrence and his Jaguars? The young signal caller has picked up his game big time since struggling to open his career. Prior to last week’s four-interception outing in a comeback win over the Los Angeles Chargers, Lawrence posted 17 total touchdowns compared to two interceptions for a 104.6 QB rating in his final nine regular-season starts.

Let’s put this into perspective for a second. In Mahomes’ final nine starts as a second-year starter back in 2019, he accounted for 17 touchdowns against five interceptions for a 99.0 QB rating.

Lawrence’s rookie season included playing 13 games under a disastrous head coach in Urban Meyer. In fact, the former college head coach couldn’t even last a full season in Duval due to both his off-field issues and a complete lack of knowledge of the NFL game.

Meyer’s final game as Jacksonville’s head coach resulted in a 20-0 loss to the Tennessee Titans in which Lawrence threw four interceptions.

When Mahomes took over for Alex Smith as Kansas City’s starter in 2018, he had future Hall of Fame head coach Andy Reid calling the shots. At that point in his career, Reid had already coached 13 playoffs teams — the very number of games that Meyer coached in Jacksonville before being canned. Just let that sink in.

It’s not a coincidence that things turned around for Lawrence as a sophomore after Jacksonville hired Super Bowl-winning head coach Doug Pederson. In an not-so-subtle manner, Pederson’s performance in his first season in Duval showed us just how bad Meyer was. 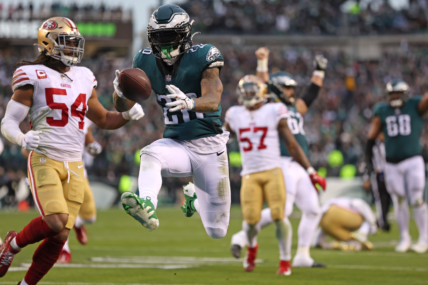 Supporting casts play a role, too

Mahomes’ first season as Kansas City’s starter saw the team boast a 12-4 record. It had four Pro Bowlers on the offensive side of the ball, including skill-position players such as wide receiver Tyreek Hill and tight end Travis Kelce. The two combined for north of 2,800 receiving yards and 22 touchdowns.

As you likely already know, Lawrence didn’t have anywhere near the same supporting cast as a rookie. Marvin Jones led the team in receptions (73) and receiving yards (832). The team’s top pass-catching tight end was James O’Shaughnessy with 24 receptions.

Once Jaguars general manager Trent Baalke decided to go out there and get some weapons last offseason, things turned around big time. In addition to 2021 first-round pick Travis Etienne making his debut in 2022 (running back missed his entire rookie campaign), the Jags added wide receivers Christian Kirk and Zay Jones to the mix. They also brought in a solid tight end in that of Evan Engram.

What followed was a much better sophomore season for Lawrence than what most had expected. Kirk, Jones and Engram combined for north of 2,700 receiving yards during the regular season. This helped Lawrence take the next step.

Imagine that. The organization actually found Lawrence some weapons, and he played like a Pro Bowler. Crazy stuff.

It’s interesting to look at. In his first go-around in the NFL Playoffs, Lawrence is seen as the young gun with Mahomes being the seasoned veteran. The role seems to be reversed for Kansas City’s star.

In his first career NFL Playoff start back in January of 2019, Mahomes took out Pro Bowler Andrew Luck and the Indianapolis Colts. That divisional playoff game saw Mahomes complete 27-of-41 passes for 278 yards in the 31-13 win. While Kansas City would go on to lose to Tom Brady and the New England Patriots during Championship Sunday, he made his name known that winter.

Fast forward four years, and Lawrence has an opportunity to do that very same thing. A big performance and upset win over the homestanding Chiefs would change the narrative around Lawrence big time. He’d go from talented young signal-caller to one of the faces of the NFL moving forward, much like what Mahomes did after his first regular season as a starter.