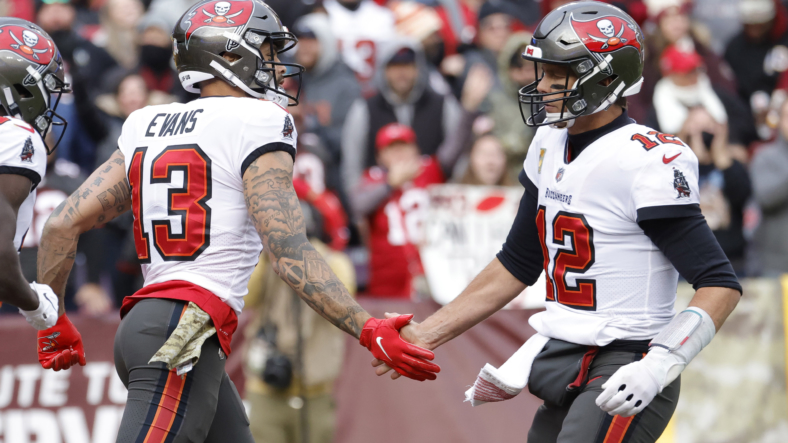 Tampa Bay Buccaneers quarterback Tom Brady is not holding back in his criticism of the NFL after teammate and star wide receiver Mike Evans received a one-game suspension by the league.

Evans was suspended on Monday for his role in a brawl with New Orleans Saints cornerback Marshon Lattimore one day before. It was the continuation of multiple issues between the two division rivals over the past half-decade or so.

In his weekly appearance on the Let’s Go! podcast, Brady defended his teammate’s actions in a big way while calling out the NFL over the one-game ban.

“I love Mike. And the fact that Mike would come out there to defend me, it means everything in the world to me as a teammate and a friend. And Mike knows how I feel about him. So, in the end, emotions are a part of sports. Sometimes they boil over and they obviously did yesterday. And it’s an unfortunate circumstance. I don’t think it deserved any type of suspension. I think that’s ridiculous. You know hopefully we can move past it, get to a better place. You know in the end, I appreciate Mike having my back. I know he’ll learn from it. And he knows that we all have is back.”

It was back in 2017 that Evans was suspended one game for a cheap shot on Lattimore during a game between the Buccaneers and Saints. The Pro Bowl receiver will appeal this most-recent suspension, but nothing is expected to come of said appeal.

Tom Brady could be without top targets moving forward

Both Chris Godwin and Julio Jones were sidelined from Sunday’s game against the Saints. Depending on the appeals process, Brady could be without his top-three wide receivers for next week’s game against Aaron Rodgers and the Green Bay Packers.

With both Godwin and Jones out of action on Sunday, Tampa Bay found itself shutout in the first half. It was the continuation of struggles from Brady against the Saints since he joined Tampa Bay back in 2020. In fact, the seven-time Super Bowl champion was 0-4 against New Orleans in four regular-season outings as a member of the Buccaneers since joining the team prior to the Week 2 win.

As you can see, the 45-year-old Brady has struggled to an extent through the first two games of the 2022 season. Said struggles could continue if Brady is without his top targets against a stout Packers defense in Week 3.