When Carson Wentz went down with a foot injury, it was widely and rightly assumed that second-year quarterback Jacob Eason would take the reins of the Indianapolis Colts‘ offense. Sixth-round rookie Sam Ehlinger is challenging that assumption.

Reich also stated that for the rest of the week, Ehlinger and Eason will continue to share reps with Indianapolis’ No. 1 offense, according to The Athletic‘s Zak Keefer.

Although Wentz has already been spotted at practice without a walking boot despite requiring surgery on his foot, it’s going to be a while before he’s fully recovered. He’ll be the unquestioned starter upon his comeback, barring something unforeseen.

Speaking of things that are difficult to anticipate, no one would’ve thought a QB competition would play out in Indy, but here we are. Heck, even after Wentz got hurt, who would’ve thought Ehlinger would have a chance at all of unseating Eason atop the depth chart?

With that in mind, it’s worth digging into the games of Ehlinger and Eason a bit to see which direction Indianapolis is likely to go as the team attempts to keep its playoff hopes alive until Wentz returns. There’s no reason to think Wentz will be pressed back into action, given his lengthy injury history.

See where the Colts rank in our latest NFL power rankings

The Texas Longhorns football program has been in a state of flux, uncertainty and underachievement for a while, yet Ehlinger was essentially a four-year starter and a stabilizing force during the perpetual turbulence in Austin.

Ehlinger’s decorated college career and sheer game experience are factors that got him drafted in the first place. He lacks some of the “wow” factor as a passer that top QB prospects boast. However, there’s something to be said for Ehlinger’s dual threat capabilities, as he racked up 1,903 rushing yards over four years at Texas.

Can the Colts make the postseason again in 2021? Read our NFL playoff predictions to find out

Meanwhile, Eason’s game and skill set are quite a stark contrast. He’s strictly a pocket passer with an absolute hose for an arm and can drive it to any area of the field. The problem for Eason has been consistency and scattershot accuracy. He was a fourth-round pick last year and didn’t see the field behind Philip Rivers.

You may look at the completion numbers and think Eason is far superior to Ehlinger based on their respective final college seasons. That said, Eason was in the mid-50% range in his two years at Georgia before transferring, and in Ehlinger’s two preceding years, he was at 64.7% and 65.2%. 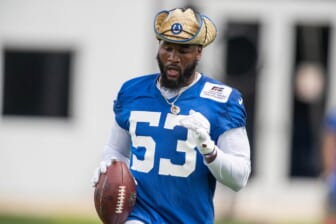 Because Ehlinger can make off-schedule plays with his legs and seems to have the moxie that Eason lacks, it’s not a total shock he’s jumped out at Colts training camp.

Ehlinger is a nice story, but no offense to him: If he’s trotting out as Indianapolis’ Week 1 starter — particularly without All-Pro guard Quenton Nelson in the lineup to help protect him — things could get ugly in a hurry for the Colts in 2021.

That said, many of his detractors probably didn’t think Ehlinger had any business being drafted, much less making a 53-man roster, and much less competing for a starting gig as a rookie. Maybe it’s unwise to count him out right away.

Many criticized the Colts this offseason for banking on a Wentz reunion with Reich as a viable plan to fix their QB situation in the wake of Rivers’ retirement. General manager Chris Ballard may have somehow lucked into a viable contingency plan with a late-round flier on Ehlinger.

Maybe the Colts’ defense can help their offense along early. See where Indy places in our NFL defense rankings