Los Angeles Lakers general manager Rob Pelinka will be in that role for at last one more season following a disastrous 49-loss 2021-22 campaign for the team.

On Monday, Los Angeles made official what everyone knew the night before. Immediately following the Lakers’ season finale win over the Denver Nuggets, reports broke that head coach Frank Vogel was going to be fired. An official announcement came on Monday from Southern California.

The backdrop here is Los Angeles’ struggles despite boasting an all-time great in that of LeBron James and two other future Hall of Famers, Russell Westbrook and Anthony Davis.

In speaking to the media on Monday, Rob Pelinka touched on what the Lakers are looking for in their next head coach. He also addressed rumors of discontent on the part of King James and suggestions that the four-time NBA champion might not be long for Southern California.

“With obviously superstars on our team, we want a strong voice that’s able to inspire the players to play at the highest level of competition every night.”

It was noted earlier on Monday that Toronto Raptors head coach Nick Nurse is a candidate to replace Vogel on the Lakers’ bench. Whether that’s even a remote possibility remains to be seen. What we do know is that the Lakers are going big-game hunting for a new head man.

Vogel was fired on Monday after leading the Lakers to a 127-98 record in three seasons. Said tenure was defined by COVID-19 and a multitude of injuries within Los Angeles’ aging roster. He did lead the Lakers to the NBA title following the COVID-shortened 2019-20 season. Since then, Los Angeles boasted an 81-79 record under Vogel.

Despite the Lakers’ struggles over the past two seasons, Pelinka did not simply use Vogel as a fall guy. He placed the onus on both the players and those remaining within the organization to improve, himself included.

“I think when you have disappointment, you need to take ownership of that and vow to make adjustments to be better,” Pelinka told reporters. “And that’s where the work starts today. We have exit interviews with every player, so we get a chance to get their thoughts and really reflect on ways that we can be better across the board.”

“Today is not going to be a day of finger-pointing or unwinding all the specific reasons,” Pelinka continued. 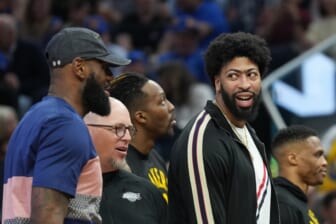 When asked about James’ future in Southern California, Pelinka stated what he believed to be the obvious. “Every indication we’ve received is he sees the Lakers as his home,” the general manager said.

While this might sound fine and dandy, it seems to be more PR spin than anything else. James is under contract for one more season and is eligible to sign another super-max extension this summer. If the future first ballot Hall of Famer pushes back against that, a new head coach will be faced with a ton of questions about whether James plans to finish his career wth the Lakers.

Remember, it was during the regular season that various reports suggested there was a rift between James and the Lakers’ front office. Some of that stems from their lack of activity ahead of the February 10 NBA trade deadline and the fact that Russell Westbrook simply never fit in with the current iteration of the team.

Rob Pelinka under a microscope himself

We can talk about Vogel’s struggles on the bench over the past two seasons. We can discuss James having his hand in pretty much all of the major roster decisions in Los Angeles. Acquiring Russell Westbrook last summer being a primary example. We can also discuss injuries that impacted the Lakers this past season.

That’s all fine and dandy. But from a roster construction standpoint, Pelinka let the organization down.

Remember, their rivals up north in that of the Golden State Warriors won 53 games despite seeing Stephen Curry, Klay Thompson and Draymond Green being on the court together for all of 11 minutes. The injury excuse only goes so far.

In his four full seasons as the Lakers’ general manager, Pelinka oversaw a roster than earned two playoff appearances and won that one title in the Orlando Bubble during the COVID-19 pandemic.

Outside of that one season, it’s been a disastrous tenure for Rob Pelinka in Southern California. He might take blame for these struggles. But we’re wondering aloud whether that’s going to be enough moving forward.