The Los Angeles Lakers have parted ways with Frank Vogel and the franchise is reportedly targeting one of the best coaches in the NBA to take over.

Even before officially firing Vogel, rumors on the Lakers’ coaching search spread quickly. Los Angeles is reportedly interested in Doc Rivers, among other candidates, and will be keeping a close eye on who becomes available. While there are multiple candidates right now, there is one that sits atop the organization’s wishlist.

According to Shams Charania of The Athletic, Toronto Raptors coach Nick Nurse is one of the Lakers’ top targets to replace Vogel as head coach.

Nurse will not be freely available this offseason. He won a championship with the Toronto Raptors in 2019 and signed a multi-year contract extension with the club shortly after. He is signed for the next two seasons, meaning Toronto would need to agree to trade his rights to Los Angeles.

It’s an ambitious wish by the Lakers. The 54-year-old coach has cemented his status as one of the best strategists in the NBA. Furthermore, the Raptors are a team on the rise and they will be competing in the Eastern Conference playoffs this year.

Los Angeles doesn’t even know if Nurse would be interested in them per The Athletic. The front office is simply hoping a new contract and the opportunity to coach in Southern California is enough to convince Nurse to leave the Raptors. Even if he is willing, limited Lakers’ trade assets would complicate arranging a deal with Toronto.

On the surface, coaching the Lakers might seem like an opportunity most NBA head coaches wouldn’t turn down. However, this franchise isn’t nearly as desirable as it used to be even with LeBron James and Anthony Davis on the roster.

While Los Angeles could pitch Nurse on the opportunity to work with LeBron and Davis, availability is a problem. Davis has played a combined 76 regular-season games since 2020 and his durability issues are a long-term concern. Likewise, LeBron turns 38 in December and isn’t a safe bet to play in 60-plus regular-season games next season.

Outside of those two players, the Lakers’ roster is one of the worst in the NBA. Los Angeles is also stuck with Russell Westbrook and must pay him $47 million next season. If the club wants to move off his contract, it will cost their 2027 first-round pick and they’ll need to take on other bad contracts. 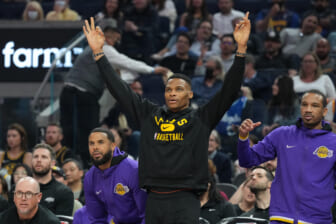 Moving to Los Angeles might not even be that appealing for Nurse, who grew up in Iowa and has never spent any time during his coaching career in a major US city. In every way, the Raptors’ job should appeal more to Nurse than the Lakers’ vacancy.

The only time Nurse will be coaching in Los Angeles next year is when the Raptors travel to face the Lakers or Los Angeles Clippers.