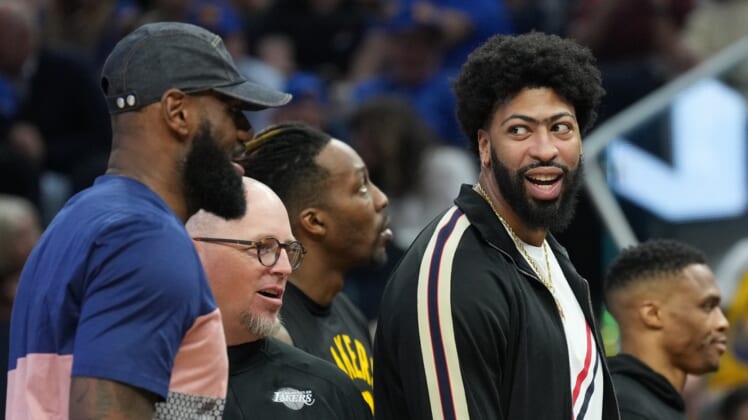 LeBron James anticipates changes in the offseason after the Los Angeles Lakers missed the playoffs for the fifth time in the past seven seasons.

James said Monday it’s natural to begin the offseason thinking about what adjustments might be necessary to get the Lakers back to the NBA Finals.

James said he respects head coach Frank Vogel but didn’t know what the future would hold after reports over the final month of the season focused on what head coaching plans the Lakers might have.

“I respect Frank as a coach and as a man. He’s a man who gives everything to the game,” James said. “At the end of the day I don’t know what’s going to happen with Frank and him being here, but I have nothing but respect for him.”

James averaged 30.3 points per game, becoming the first player to improve his career scoring average (27.1 points) in his 19th season. And he scored 30-plus points 34 times, easily setting another NBA record for a player in his 19th season.

He’s eligible for a contract extension with the Lakers this summer but said Monday he hasn’t had a conversation with the team about that deal.

The Lakers won the 2020 NBA title in the “bubble” in Florida. All-Star teammate Anthony Davis said Sunday night he believes the duo can remain the center of a championship team, but admitted there is a need to understand what has changed for the team since the title. James concurred, pointing to health and the inability to keep the team’s stars on the court as the reason for the 2021-22 disappointments.

Davis played 40 games after just 36 games played in 2020-21 and a veteran roster assembled around the star nucleus was unable to pick up the slack.

“The reason we were not very good together is we weren’t on the damn floor together. That’s the No. 1 damn thing,” Davis said.

Roundly critiqued for pushing the Lakers to pursue Russell Westbrook — and reportedly discouraging the signing of DeMar DeRozan in free agency — James claimed his focus will be on getting ready for training camp.

“I think the front office will do whatever it takes to win,” he said, adding he’ll share his opinion if the team asks for it.

During All-Star weekend, James sparked speculation he could be considering another relocation when he praised the city of Cleveland and said “the door isn’t closed” on playing for the Cavs again some day.

James, 37, left Cleveland in 2018 to sign with the Lakers. He was blunt Monday in his assessment of the move.

And though he ended the season idle due to an ankle injury and was told to rest for 4-6 weeks, retirement is not one of the options on the table for James. He said there is no cap on how much longer he wants to play.

“I can still produce at a high level, as I showed this year,” he said.